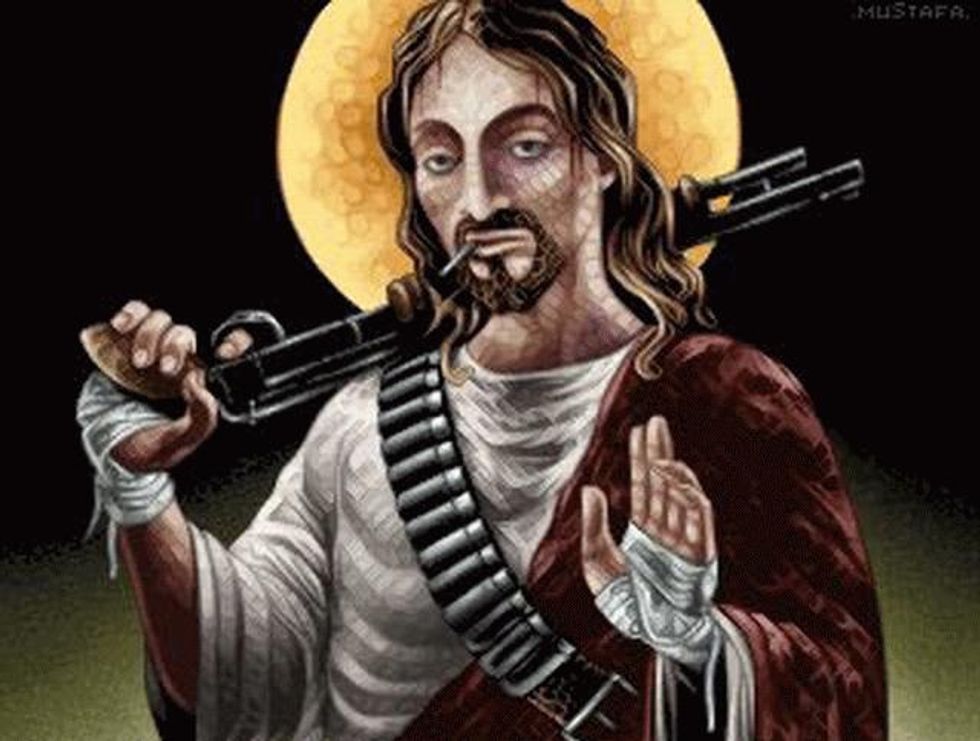 Blessed are the heavily armed, for they shall fuck up anyone who gets in their way.

Nice long story in the Charleston Post and Courier about a couple of good old boys in the South Carolina House of Representatives, Josiah Magnuson and Jonathon Hill -- take a wild guess at their party affiliation -- who are setting up a group they hope will save America from itself, or at least provide a last bastion of Liberty once the economy and civilization collapse. Either way, the goal is to have lots of guns and Bibles, and to restore traditional American values of Godliness, Manliness, and Gunliness.

Magnuson and Hill are the founders of the "Virtue Solution Project," which has a website and a manifesto and everything, and are dedicated to restoring the Constitution as they understand it (poorly, we are guessing). The Constitution of course been mostly ruined by activist judges, homosexuals, and other internal enemies.

They are advocating that their followers, and offshoot groups, form their own communities that will no longer have to rely on corporate America or the “tyrannical” federal government. They are encouraging neighbors to support “principled men” — such as themselves — who are willing to nullify laws and court rulings they don’t agree with, like abortion, gay marriage, gun restrictions and federal standards for driver's licenses.

Yup, South Carolina lawmakers talking about nullification of federal law. What could possibly go wrong? They haven't withdrawn to an armed compound yet, but the two homeschooled geniuses are at least planning some “community preparedness centers" where, when society falls apart, decent Christian patriots can have access to “reading material, tools, food storage, ammo, and more.” Or maybe it's just for them and their group, and the rest of y'all will get shot, just wait and see. They've at least given thought to all the end-of-civilization scenarios:

The centers will be there when the economy collapses, a natural disaster occurs, a foreign nation attacks, the federal debt dooms the country or an electromagnetic pulse wipes out the nation’s infrastructure.

They don't appear to mention the Rapture, although Magnuson did tell the paper we're "living in the end times and so forth." He'll be setting up his "resource center" soon in an old barn, which will serve a dual function as a coffee shop and survivalist hub for like-minded Christian preppers. People will have the chance to drop in and learn how to defend their families, grow survival foods, and use cool militia phrases like "perimeter" and "OpSec" and "interlocking fields of fire." Not surprisingly, they also have a YouTube channel where you can learn about virtue and prepping and the spiritual awakening that's sure to save/rebuild the shattered fragments of America, depending on the breaks.

Magnuson and Hill make clear they're not advocating a revolution or anything, just readiness for when everything falls apart, which it surely will with all the sin and taxes and fornicating, not to mention the gays and abortions. And probably Barack Obama taking your guns, still. Most preppers call that being ready for "SHTF," but that abbreviation has a bad word in it, so we're unsure what these guys call it. They also have the usual spectrum of crank beliefs, including a blog Magnuson used to run which warned readers to avoid scary corporations that supported the coming political union of the U.S., Canada, and Mexico. Remember the North American Union and the NAFTA Superhighway? It's like a nostalgia trip for kooks!

These guys aren't total radicals, however. In one of his videos, now set to "private," Hill explained that while he prefers homeschooling, he's OK with the right kind of public schools:

“There’s nothing wrong with education,” he said. “We can talk about whether it’s government’s role to fund that or control that.”

His idea of public education is a one-room schoolhouse where parents choose the teacher.

“That’s the way it worked back in the day,” he said. “And then we got away from that and now we basically have career politicians and bureaucrats on a school board that are running things. It’s no longer the parents.”

So we can have those again, especially after the cities are depopulated by war, famine, gang violence, and roving packs of C.H.U.D.s.

As prepper loons go, they're only interested in surviving the End of Civilization, not bringing it about, which is a relief. They have little patience for your Sovereign Citizen types, and asked a woman at one of their meetings to leave after she questioned the legal authority of local police, who she insisted were all given authority by "a corporation," and were therefore less legitimate than self-constituted militia, which are ordained by the Bible and the Constitution. And like lots of fundagelicals, they have a penchant for weirdass graphics, like this thing from their little manifesto:

And this helpful explanation of how burning barn-castles result in preparedness, although it's disappointing they couldn't fit the gears and green cross into the design more seamlessly:

They seem like really nice guys, and they also have some great ideas for good governing, like the bills they've introduced that would allow local governments to prohibit gay marriage and abortion, and to require transgender people to use the right damn bathroom, dammit. Strangely, none have passed, which is almost certain proof of the societal collapse they've been warning about.

So if you want to get in on the ground floor -- perhaps literally -- of a brand-new heavily armed Christian enclave, you might want to get yourself to the old barn near Campabello, South Carolina (the fortress will be built later). Don't worry there might be a bunch of kooks running around, because they're going to be very careful to remember to hang a "No Paranoids" sign by the front door.

Yr Wonkette is ad-free. Please help us in our mission of stockpiling booze for the end times by making a generous donation at the clicky below!