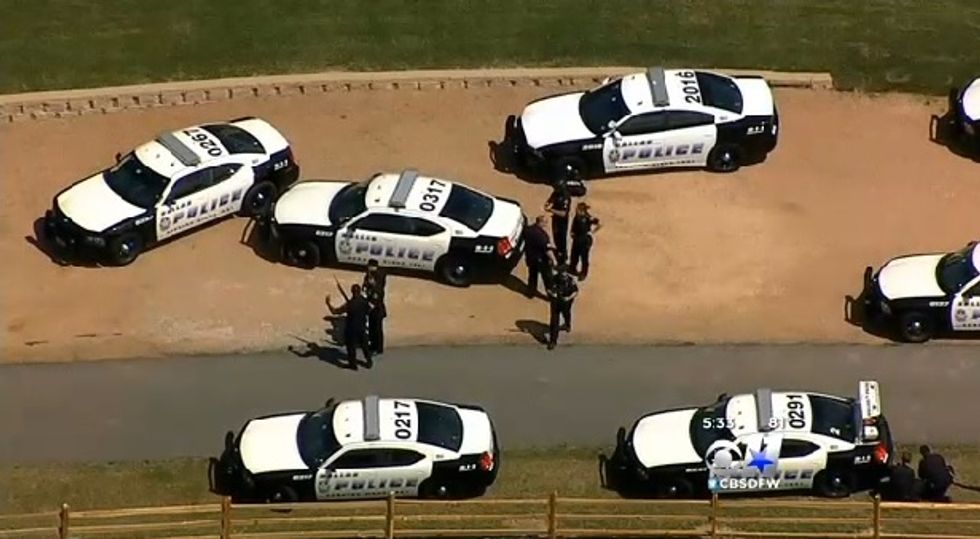 Yet another sovereign citizen has utterly failed to get anyone to follow him into battle against the oppressive government forces that must be overthrown in order to secure American liberty. This time it was a disgruntled armed 60-year-old man,Douglas Lee Leguin of suburban Corinth, who set fire to a dumpster in a gated community in Dallas and waited to ambush police and firefighters.

Mr. Leguin had also threatened a babysitter and an 8-year-old girl in a nearby home, and was reported by his family to Dallas Police as a missing person before he set the fire. Add your own joke here about how much of him was "missing." Family members reported that they were concerned about Leguin when he failed to arrive for work, and "also noted that an AK-47, several rounds of ammunition, and multiple bottles of propane were missing from the residence." It must be really frustrating for Sovereign Citizens when their own families betray them to the illegitimate government forces like that.

Assistant Chief of Corinth Police Greg Wilkerson said the department did not have any prior history with Leguin, but immediately grew concerned based on what family members told them.

“The family members said he had been watching Al-Jazzeera TV quite a bit lately. He had made some statements to other friends about starting his own country. So that, in addition to the fact that we are now missing weapons, propane and several rounds of ammunition, we were very concerned.”

See? Al Jazeera does inspire terrorism! Leguin was arrested after a two-hour standoff with police; while Leguin apparently fired several shots at a fire truck, no one was hit, and there were no physical injuries during in the incident, including the nearby babysitter and little girl, whose families we hope have excellent insurance for post-trauma counseling.

Despite Leguin's obvious signal that the New American Revolution had arrived, fellow patriots did not rise up and start shooting Democrats and elected officials, for some reason. You'd think that after five years of oppression by a usurper who isn't even qualified to be President, they'd be out in droves, but instead they just go back to their computers and challenge Obama to just try taking away their guns. Oh, and sure, from time to time, someone like Douglas Leguin (Or Douglas Cole... or Dennis Marx... or Jerad and Amanda Miller...) tries to get the revolution going, but those violent freaks are outliers, not really part of the Patriot Movement, who are keeping their powder dry and waiting for the REAL revolution to begin. Any day now.