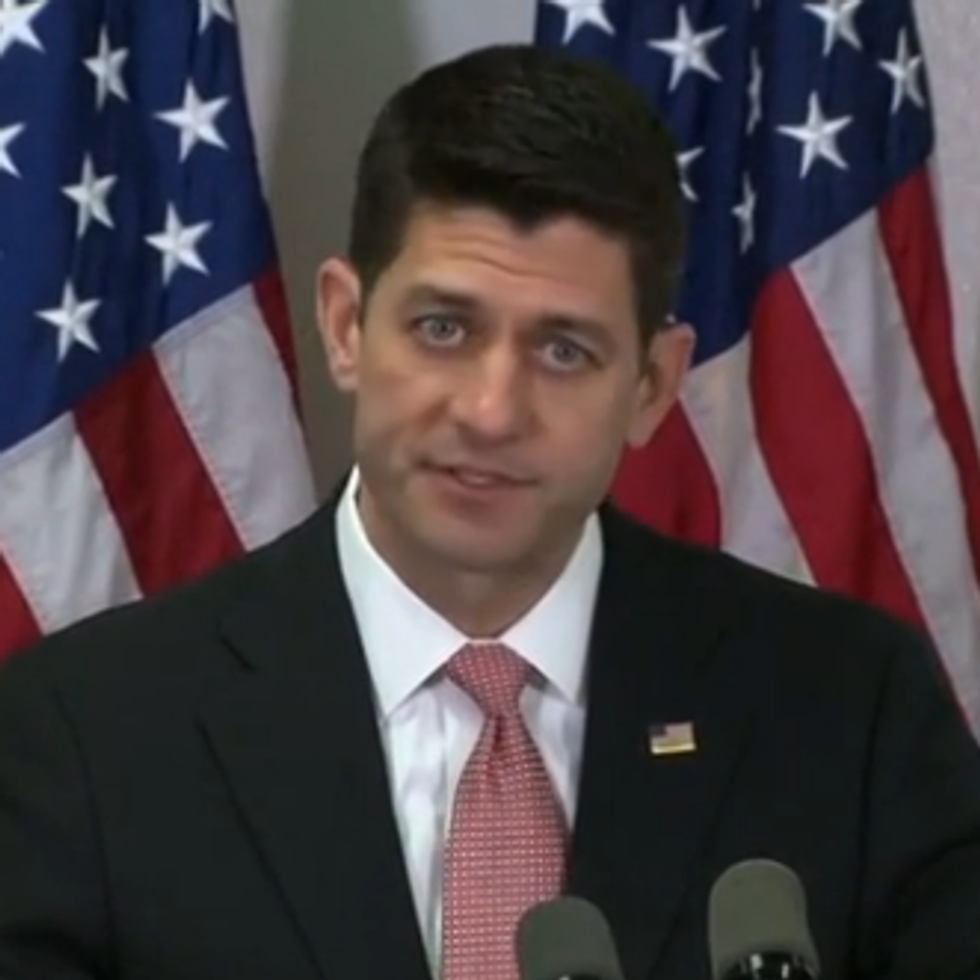 That's his "I'm going to pull over this car!" face.

[contextly_sidebar id="vtosngC9cs2bxy4twfR1iqK9n4sxPT6S"]If there's one thing that makes Republicans say "Oh my stars!" and "Well I never!" it is racism. STOP LAUGHING, we are not done writing this lede yet. As we all know, Abraham Lincoln and Martin Luther King, Jr. and Rosa Parks and Jesus and the dinosaurs were all card-carrying members of the GOP (unlike the REAL RACIST Hillary-lover Sen. Robert Byrd), therefore it's easy to imagine how upset overgrown twink House Speaker Paul Ryan got when he heard Donald Trump wasn't sure the Ku Klux Klan and David Duke are so bad after all. He hit the fainting couch! A tiny droplet of genteel, glistening man sweat appeared uponeth his widow's peak!

And he's going to have to have a stern talking-to with that Eddie Haskell "Donald Trump" boy and explain that such uncouth rudenesses are not allowed if he wants to be a REAL Republican:

“When I see something that runs counter to who we are as a party and as a country, I will speak up, so today I want to be very clear about something,” Ryan said. “If a person wants to be the nominee of the Republican Party, there can be no evasion and no games. They must reject any group or cause that is built on bigotry. This party does not prey on people’s prejudices. We appeal to their highest ideals. This is the party of Lincoln.”

He added: “This is fundamental. And if someone wants to be our nominee, they must understand this. I hope this is the last time I need to speak out on this race.”

BRB DYING OF GIGGLE-GASMS. Thank White Jesus the good speaker is willing to have these hard conversations on race and bigotry and ... BRB AGAIN STILL GIGGLING.

[contextly_sidebar id="4HJAqcr1P5jl6VixGY0H49ml4OfchS5l"]Oh wait, does Paul Ryan actually think "this party does not prey on people's prejudices"? What "party" is he talking about, please? The one that's been shit-er-wauling the past year over how every Muslim in the whole United States Of The World is plotting to kill us, therefore we shouldn't help refugees? The one that's been pushing through bullshit "religious freedom" laws, promoting the hilarious fiction that somehow Christianity, THE MAJORITY RELIGION IN AMERICA, is under attack, and all because Adam and Steve want to put a ring on it? The one that has been terrifying pistol-humping malcontents for years with dire warnings that Muslin Black President Barack Barry Beyoncé Shabazz O'Bama X is going to steal all their penis-guns, and that this is somehow more important than when children are massacred to death? THAT PARTY, IS THAT THE ONE YOU ARE TALKING ABOUT, PAUL RYAN, YOU FUCKING TWIT?

[contextly_sidebar id="rwMnFgDER5TOE5hEoWfqABuzJvSiKfq0"]And surely, Paul Ryan would never be guilty of "preying on people's prejudices," like saying people on public assistances are probably all (black) welfare (black) queens who use (black) Obamaphones (or white ones -- they come in all colors!) to waste Our Taxpayer Moneys! No never, not him.

How did these words even come out of Paul Ryan's mouth? How many fingers did he have crossed up his own ass when he said it? We don't like to say this at the Wonkette, but maybe it's best for Speaker Ryan to just sit there and look pretty, how about that?

RIP back when he was cute.