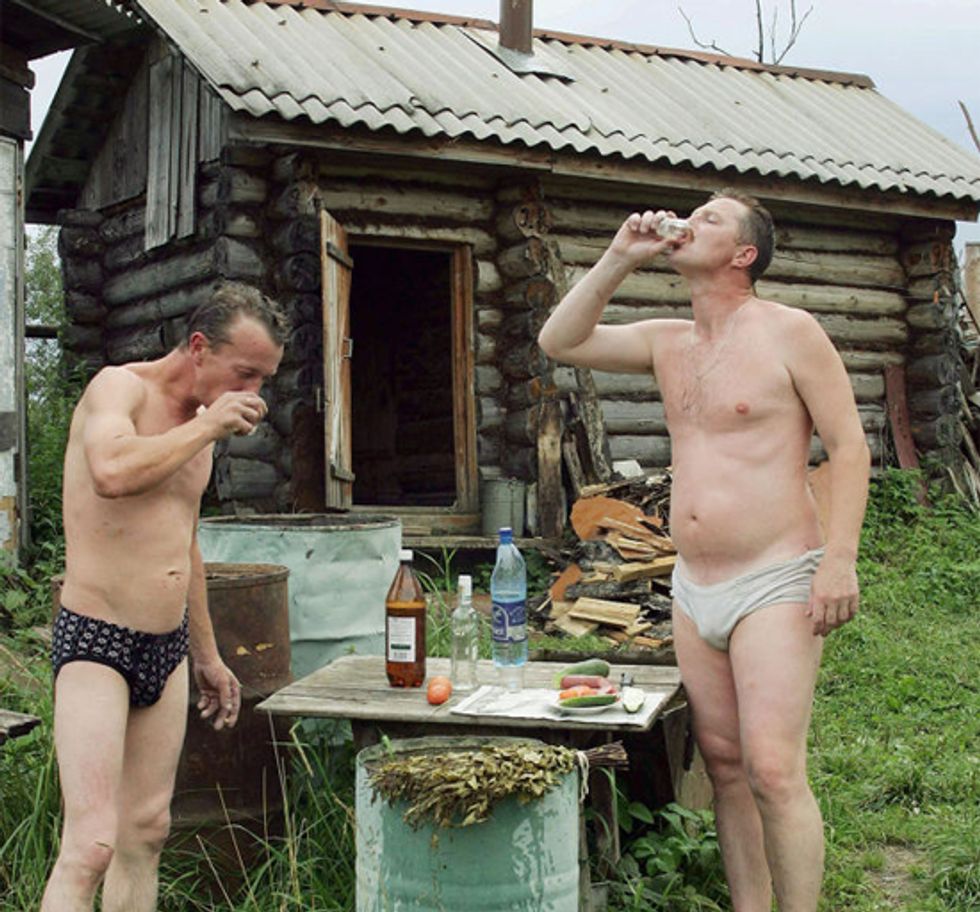 Pour one more out for Mikey

Sure, we're all kinds of tore up over the resignation of Michael Flynn as Donald Trump's national security advisor, because while Flynn's departure means we might be marginally more safe from deranged ideas being whispered into Trump's ear, we're also losing a prime source of potentially hilarious clusterfucks. We will get by, of course, because Flynn's resignation still leaves a whole swamp full of rabid crazies to occupy us. But what about the Russians? How are they coping with the loss? Looks like they're taking it pretty hard -- you know, as a matter of principle, because they hate the basic injustice of it and all. But they're all sure it bodes ill for U.S.-Russian relations because OBVIOUSLY Flynn was forced to resign by a "dark campaign of Russophobia in Washington," the poor dear. Let's see how hard the news is going down in the Duma!

Konstantin Kosachev of the upper house wrote in a post on Facebook that readiness for dialogue with Moscow was now seen in Washington as a “thoughtcrime,” a reference to the George Orwell’s dystopian novel 1984.

“To force the resignation of the national security adviser for contacts with the Russian ambassador (normal diplomatic practice) is not even paranoia, but something immeasurably worse,” he wrote. “Either Trump has failed to gain his desired independence and is being cornered consistently (and not without success), or Russophobia has infected even the new administration, from top to bottom.”

Or maybe the idea that we only have one president at a time is still marginally important? Hahaha, we are joking there; this has pretty much nothing to do with Russia, or with Flynn undermining the foreign policy of Barack Obama while Obama was still president: Flynn only resigned because he got caught making Mike Pence look bad. If Flynn hadn't falsely reassured Pence he hadn't mentioned sanctions in his pre-inauguration chats with the Russian ambassador, Pence wouldn't have gone on national teevee to say that Flynn was a great trustworthy guy, and the Trump administration might well have found an excuse to keep Flynn on. That's not 1984, that's "Don't Make Your Boss Look Bad, Stupid." (George Orwell never wrote any management books, despite the Bush administration's fondness for Newspeak like the "Healthy Forests Initiative" and the constant reminders that the Iraqi insurgency was on its last legs.)

So what did other Duma-asses have to say?

“Flynn was ‘pushed out’ not because of his mistake, but because of the unfolding campaign of aggression, ‘Russian for the Exit!’ shout the newspapers. Paranoia and a witch hunt,” tweeted Alexei Pushkov, a senator in the upper house, referring to the New York Daily News headline.

In a separate tweet he wrote: “The mission isn’t Flynn, it’s relations with Russia.”

Now wait just a second there, Alexei, whose mission are you talking about? Maybe that was just a translation problem; Roll Call's version of Pushkov's tweet has it as "it was not Flynn who was targeted but relations with Russia.” OK. Still butthurt and self-pitying, but at least comprehensible. And again, missing the point. Donald Trump still has a pathetic yearning stiffy for his strongman pal Vladimir Putin, but Flynn had to go because he was becoming an embarrassment. You know Trump places a premium on loyalty, and Flynn was one of Trump's earliest and most rabid supporters. Kind of gives a new context to this classic from the Republican convention last summer, doesn't it?

WATCH EVERY SECOND OF THIS. DON'T MISS A THING. IF THE PHONE RINGS, START IT OVER. WATCH IT THREE TIMES. pic.twitter.com/HTNiaQWF9b