Stephen Hawking Has Left The Universe 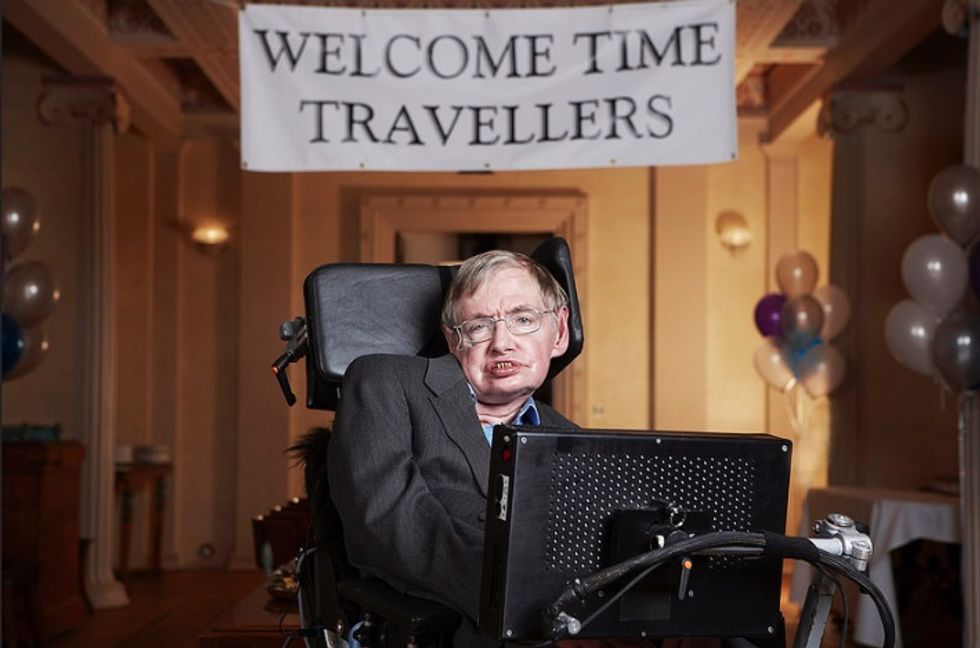 Everyone was off trying to kill Hitler

Theoretical physicist Stephen Hawking died late last night (early Wednesday morning, Universal Time) in Cambridge, at the age of 76. When he was diagnosed with ALS at the age of 21, he'd been told he had at most three more years to live, so that was a pretty good run, the best form of time travel any human can currently hope for. And wow, what a run it was. The guy applied quantum physics to black holes and pretty much blew everyone's mind. Then he had guest appearances on The Simpsons, Star Trek: The Next Generation, and that overrated CBS sitcom about nerds. Hawking liked to point out that his birthday, January 8, 1942, was exactly 300 years after the date of Galileo's death. He might find it at least a little amusing that he died on Pi Day, but almost certainly would have gotten a bigger kick out of this being Albert Einstein's birthday. (Then, to anyone trying to read anything spiritual into the coincidences, he'd remind us of probability and point out there are only 365 days to play with anyway.)

Yr Wonkette has to confess something here: I've never read Hawking's em>A Brief History of Time or his follow-up, The Universe in a Nutshell, because while I love sciencey stuff, once I get just a little way into even slightly advanced physics, my head tilts to the side like a beagle being asked if it has any thoughts on international diplomacy. I understand just enough to leave me thoroughly lost, and if you want a concise, very readable summary of Hawking's discoveries about black holes and why they matter, the New York Times obit does an excellent job even for physics boobies like us. Or me, at least.

Crom knows I appreciate the science, even if I only partly get it, but like a dopey humanities major, I'm also drawn to the little grace notes in all of this -- Hawking, already a leading theorist on black holes, reached his big breakthrough and the concept of Hawking Radiation (subatomic ejecta from black holes) after a feud with another physicist, Jacob Bekenstein, who said Hawking's own earlier research suggested that black holes could have entropy. Hawking disagreed, and in the attempt to prove it, discovered that, to his surprise, the math and quantum mechanics and wibbly-wobbly physics stuff led to the conclusion that yes, black holes have a temperature that isn't zero, and Bekenstein was right. And that discovery revolutionized theoretical physics. Again, from the Times obit:

Nobody, including Dr. Hawking, believed it at first — that particles could be coming out of a black hole. “I wasn’t looking for them at all,” he recalled in an interview in 1978. “I merely tripped over them. I was rather annoyed.”

That calculation, in a thesis published in 1974 in the journal Nature under the title “Black Hole Explosions?,” is hailed by scientists as the first great landmark in the struggle to find a single theory of nature — to connect gravity and quantum mechanics, those warring descriptions of the large and the small, to explain a universe that seems stranger than anybody had thought.

The discovery of Hawking radiation, as it is known, turned black holes upside down. It transformed them from destroyers to creators — or at least to recyclers — and wrenched the dream of a final theory in a strange, new direction.

We talk about good science fiction inspiring a "sense of wonder" -- or the fannish "sensawunda" -- but goddamn, real science is pretty good at inspiring that, too.

We also were moved by the note in the Times obit that Hawking wanted the formula for Hawking radiation engraved on his tombstone. And that gets to what we really love about Hawking -- the guy simply took so much delight not only in science, but in being a big-name scientist. For all that "popularizers" are sometimes pooh-poohed, those of us who aren't the real deal really appreciate those who can explain it to us, especially if they can manage that without condescension. (We're thinking here of how much Kurt Vonnegut loved the long-ago subhed of Popular Mechanics magazine in the '20s and '30s: "WRITTEN SO YOU CAN UNDERSTAND IT.")

Stephen Hawking was just one damn fine human being. He loved that the voice synthesizer that he began using after he lost the ability to speak in 1985 restored his ability to communicate -- but he wasn't entirely thrilled that it gave him an American accent. He wrote A Brief History of Time not just because he was excited about sharing his thinking with the public, but out of the very practical desire to make sure he'd have enough money to send his kids to college. That worked out fairly well for him, and he became both wealthy and a media star.

Hawking understood that science celebrities are good for the science business. Plus, what a chance to just plain have a hell of a lot of fun, playing himself in a "Star Trek" holodeck fantasy where he plays poker with Isaac Newton, Albert Einstein, and Mr. Data.

And frankly, he's the most convincing guest of the bunch.

Somehow, we completely missed, until today, the story of Hawking's 2009 party for time travelers. He held it as an experiment of sorts, and as a nice stunt for his TV series Into the Universe with Stephen Hawking: He held the party, with expensive champagne and lovely snacks, but didn't print up the invitations until well after the event, so that only genuine time travelers would be able to make the date. Sadly, no one showed up:

The Giant Freakin Robot blog explains several possibilities as to why that might be, from the very simple -- maybe the invitations won't survive long enough -- to the very science fictional: Hawking had to kill everyone who showed up, to preserve the space-time continuum.

In 2007, just a few months after he tuned 65, Hawking went for a ride on a commercial version of NASA's "vomit comet" used to train astronauts: The jet climbs to high altitude, then dives, leaving the occupants of the seatless, padded cabin area weightless for a few minutes.

Hawking was hoping to actually reach space in Richard Branson's SpaceShip Two, but the technology didn't quite arrive in time. He explained he had very deliberate reasons for stunts like that (apart from, you know, the whole "it's a hell of a lot of fun" thing): In addition to encouraging public interest in space, he wanted to show "that people need not be limited by physical handicaps as long as they are not disabled in spirit."

Dr. Hawking even became a brief, insane talking point for opponents of the Affordable Care Act back in 2009, when some rightwing genius published an editorial proclaiming that Obamacare would surely institute death panels, just like all socialized medicine:

People such as scientist Stephen Hawking wouldn’t have a chance in the U.K., where the National Health Service would say the life of this brilliant man, because of his physical handicaps, is essentially worthless.

Hawking, from his home in Cambridge, pointed out where Cambridge is, and noted that he was very much alive thanks to the evils of socialized medicine:

I wouldn't be here today if it were not for the NHS [...] I have received a large amount of high-quality treatment without which I would not have survived.

To bring things full circle, we suppose it would be only fitting for some American politician to claim that Hawking's death is somehow the fault of socialized medicine. Keep an eye on Louie Gohmert's Twitter feed today, OK?

Update: Well of course we have to add this lovely farewell from our REAL president:

Yr Wonkette is supported by reader donations. Please click here to help us keep reaching for the stars and wallowing in the gutter.