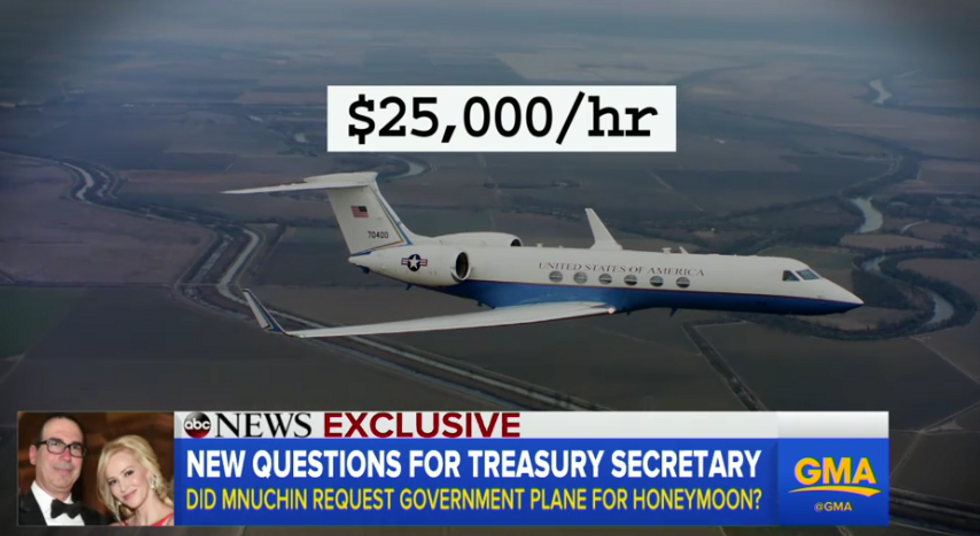 Treasury Secretary Steven Mnuchin ran up nearly a million dollars' worth of travel on government and military jets, because of course he did, according to a report by Citizens for Responsibility and Ethics in Washington (CREW). The report is the result of a FOIA request fired off after Mnuchin and his sweet new wife Louise Linton took that fun little jaunt on a military jet to Louisville and Fort Knox last year, so they could look at the gold and make sure it was still there, and also to see the total eclipse of the sun (we hear Mnuchin went to Saratoga too, where his horse naturally won).

CREW board chair Norm Eisen, a former ethics lawyer in the Obama administration, tweeted that the report made clear Mnuchin was the griftiest Trump administration grifter of all:

Steve Mnuchin Asked For Military Jet For Honeymoon Because He Is Only A Three Hundred Millionaire, LOL, Poor

Time for another edition of 'Lifestyles of the Rich and Clueless'

The report, drawn from documentation that went into a Treasury Department Inspector General's report on Mnuchin's gallivanting around between spring and fall of 2017, details the rules governing when military or government planes can be used by government employees, lists seven flights where Mnuchin requested government jets, and makes it pretty clear that there really was no good reason for Mnuchin to have had the use of government/military planes -- although in virtually every case, Mnuchin said he had to have the planes because he needed their secure communications equipment, because he is very important. (That was the same reason he claimed he needed a military transport for his honeymoon, you'll recall, although somehow the nation didn't fall apart when he had to fly commercial in that instance).

Treasury's I.G. report found last October that while Mnuchin's travels hadn't broken any laws, they also didn't meet the standards required for travel on Government Air, no not at all. In the case of one trip, from DC to Ottawa for a meeting with Canadian officials, the best justification Mnuchin could come up with in his paperwork was that he'd need a military jet for the 90-minute flight because of "the potential for developments during travel related to a number of issues."

For a foreign trip, to Italy, Mnuchin originally requested a C-40 jet, the military equivalent of a 737, to carry his group of 24 people -- that's a jet that can seat up to 120. He ended up having to settle for a smaller military transport, but everyone still had plenty of legroom; the plane they got seats up to 45. That trip in the smaller plane was a bargain, at $314,000.

Secretary Mnuchin considers first and foremost his own comfort and ease, leaving the protection of taxpayer money at the bottom of his list of priorities[.]

The report also noted that travel records for previous Treasury secretaries, going back to 2005, showed they generally took commercial flights, but honestly, that's probably because they weren't as good at Treasury Secretarying as Mnuchin, who, by contrast, doesn't appear to have flown commercially on any government business (the honeymoon doesn't count, because no matter how he tried to frame needing the secure communications, his honeymoon was not government business).

CNBC reports that Treasury was most displeased by the very unfair report, much of which a spokesperson claimed "consists of falsehoods and mischaracterizations." Did that statement specify what CREW had falsified? Not exactly:

The documents CREW cites are the same documents that were examined by Treasury's Inspector General in his review of Treasury's travel, in which he identified no violation of law, regulation, or ethics requirements. The Inspector General confirmed that the Secretary is 'required by applicable authority and policy to have access to secure communications at a high level of classification at all times,' justifying the use of military aircraft. These documents explicitly demonstrate Treasury's concern for being prudent with taxpayer dollars while fulfilling important departmental responsibilities.

Which is nice and defensive, but also leaves out the IG's "concern" over the "disconnect between the standard of proof called for" in OMB standards for documentation and the "actual amount of proof provided by Treasury and accepted by the White House in justifying these trip requests."

In any other White House, Mnuchin's extravagant travel might have gotten him fired, but hey, Tom Price already resigned/got fired for pricey travel, so that's probably enough sacrifice already. Besides, in this administration, this week, a million bucks spent on hauling a grifter around is only about eleventh on the scandal meter. He may be in line for a promotion, even.

Your Wonkette doesn't fly military OR commercial; we fly the Wonkebago, straight to your hearts. Now give us money.