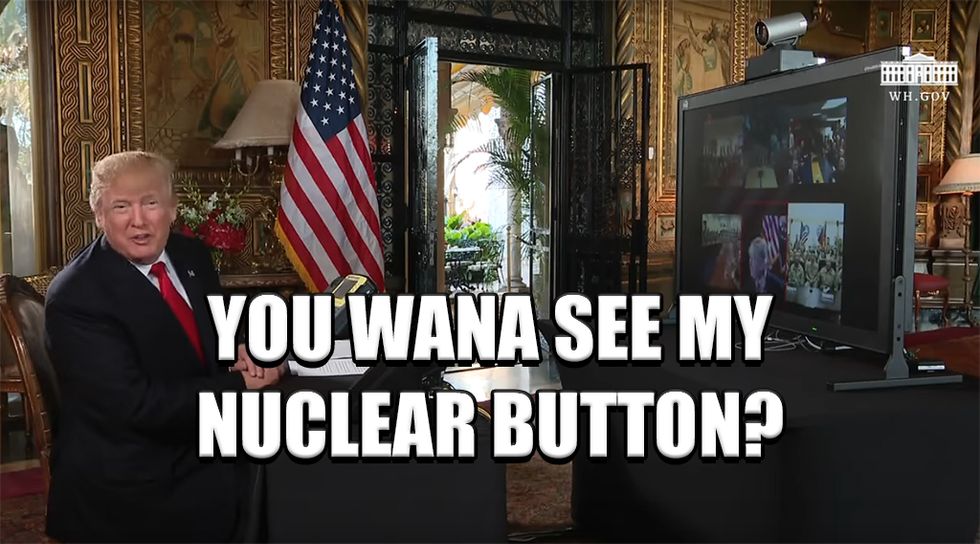 The two former WSJ reporters who founded of Fusion GPS have penned an op-ed eviscerating conspiratorial conservative crazies; they demand the House and Senate Intel Committees stop being bunch of lying Trump sluts, and release transcripts of their Trump-Russia testimony.

Somebody slipped Maggie Haberman a note from former Bush 43 and Obama national security personnel urging the Trump administration to greenlight DACA by Jan. 19, conveniently on the same day as the government shutdown.

Trump officials and Congressional leaders will meet later today to discuss caps on defense spending, NOT the dirty little Mexican children who want to go to school.

People who call themselves Trump's experts and advisers say that Trump is scared what's left of his base will revolt if he caves on DACA, but that he's willing to let the Messicans stay as long as he gets his Tortilla Curtain.

Now that California has become the haven for legal weed, Jeff Sessions is consulting crank doctors on how to find all the potted up dope fiends and lock'em up.

Utah Sen. Orrin Hatch will retire so that Mitt Romney can move on up to a de-luxe apartment on the East Side. LOL, JK, Mittens wouldn't be caught dead on the Maryland side of the Potomac!

Just a couple of weeks ago, Trump made a phone call to Mittens and tried to butter him up, but instead Trump just made Mittens so gosh darn, gee-whiz, flippin mad!

With Hatch stepping down, the rumor mill on the Hill is abuzz about who will replace Hatch on the Senate Judiciary committee. Will it be Chuck "Go Fuck Yourself" Grassley, Lindsey "I Heart Trump" Graham, or Mike "Give Kids Guns" Crapo?

Government spooks inside the NSA are bailing out as a series of crises, from leaks to inefficiencies, make Silicon Valley and its super rich Tesla-powered hoody-clad heathens that much appealing.

A number of key Justice Department positions remain unfilled due to a combination of factors that range from Trump laziness, a bottleneck of Senate approvals, and the general incompetence of nominees, as revealed on routine questionnaires.

Lobbyists are working over-time to rake in the tax benefits Congress doesn't know it gave them before new laws plug all the new loopholes in the Trump/Ryan tax cuts (for the super rich).

Here's everything you ever wanted to know about that Virginia state house seat that was decided by ONE VOTE, and why Republican fuckery is denying Shelly Simmonds her legally obtained win.

Jared Kushner was sitting down with European officials when he said, "I’m a businessman, and I don’t care about the past. Old allies can be enemies, or enemies can be friends. So, the past doesn’t count," which is as ignorant as it is terrifying.

Nobody knows how much the executive branch pays to quell sexual harassment claims since financial settlements are all lumped into a billion dollar slush fund that's been engineered to hide grabass and graft.

In yet another attempt to become an immortal demigod, Peter Thiel has bought $15-20 million in Bitcoin, thus reminding everyone that deep down he's still a smug, basement dwelling troll with a sweat problem.[Archive]

Since Bitcoin has become trendy will all the olds, cyber criminals have moved on to new crypto currencies that are harder to track now that the blockchain is selling hackers and pedos out to the police.

During his obnoxious tweetstorm yesterday, Trump announced a "dishonest media" award, and Yr Wonkette is gunning for "Best Dick Jokes."

Trump's been suffering from a form of penis envy for decades, even as the facts slap him in the face.

With Glenn Greenwald clearly leaning over his shoulder, James Risen has scribbled a long-winded trip down memory lane about that time he exposed NSA spying. You remember that don't you? He wrote a book about it, did you read it? Please clap...

And here's your late night wrap-up! Stephen Colbert talked about all the presidential traditions Trump is ruining; Jimmy Kimmel had his brother talk to some stoners; The Daily Show 'splained North and South Korea and Iranian protests; and Jordan Klepper had thoughts on the Vince McMahon's MAGA football league.

We're 100% reader-supported, like that Star Trek guy who makes you read books, but more rainbows and dick jokes.