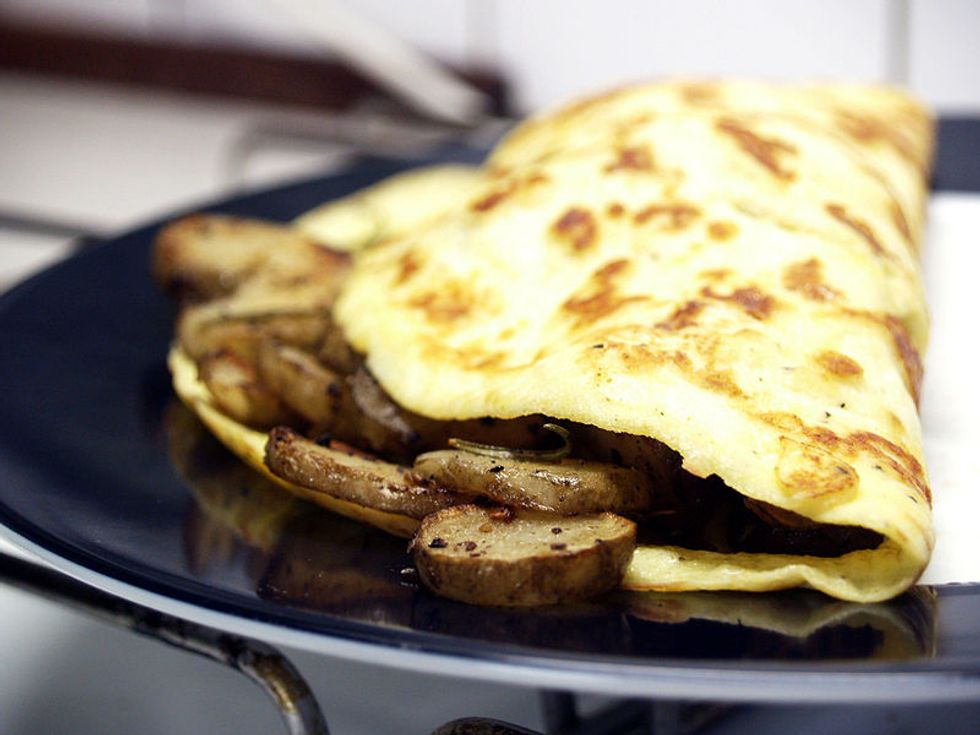 Welcome back to Off The Menu, where we bring you the best and strangest food stories from my email inbox. This week, we've got a special bonus week of more Dumb Customer stories, because WOW do I have a lot of these. As always, these are real emails from real readers.

If you enjoy this series and would like to show your appreciation to this here fine website for hosting it, feel free to donate here or buy an “ad-fewer” subscription here. Yay munneyz!

It was 30 minutes until closing time on a weeknight at a fried chicken restaurant. I was the drive-thru cashier. A car with five young men in it drove up and ordered a 20-piece box "fresh" (as in immediately fried). I told them the cook time would be 20 minutes, they said "no problem" and paid for their meal. There was no line, so they waited at the window.

Suddenly, police sirens and red and blue lights were everywhere as police cars surrounded the drive-thru. At this point, my manager moved me to the front and took over drive-thru.

I asked her later what had happened. As it turned out, those five men had robbed a store earlier and got the munchies in the middle of the car chase.

The other day I was at my local Starbucks and there was a guy in line in front of me who was … special. There's usually plenty of people serving, but for whatever reason this day there was only one guy at the register and one guy making coffee.

The guy in front of me reached the counter and, despite the fact we've been in line for at least five minutes at this point, started considering the boards and making umming noises. Finally, he said, "I'll have a mocha frappuccino, no ice."

The barista explained that this wasn't really possible, because the ice was blended up. The guy said, "So just don't blend it.” The server explained he would then just have a really sweet, slightly warm, milkshake. The guy sighed like he couldn't understand people and their desperate need to make his life harder. "Fine, then just put a little bit of ice in it. Not crushed. Just chuck some cubes in at the end."

Later, as I was waiting for my coffee, I was lucky enough to witness ice guy complain that this wasn't what he had got last time he ordered a frappuccino and request they remake it, "but cold this time."

For years I worked at Charlie’s Sandwich Shoppe in Boston. For those who don’t know, Charlie’s had been around since 1927, and was a staple of the South End and Back Bay until it closed in 2014. It was a family business with my dad and uncle cooking, and my two aunts as waitresses, while I worked the register and did take-out. We were open from 6 am – 2:30 pm, so 80 percent of our business was breakfast.

One morning, this kid comes in:

Kid: “I want a sausage and cheese omelette, no eggs.”

Me: “Okay … an omelette is made with eggs. If you take out the eggs, you don’t have anything left. Just the sausage and the cheese.”

Me: (knowing that he’s ordering for someone else) “Are you sure this is what you want?”

Kid leaves. Kid never comes back. Probably went somewhere else to get his no-egg omelette.

I was sitting at the Minneapolis airport and the guy sitting next to me ordered a "Chicken Avocado Sandwich." He then asked the waiter if that particular sandwich had avocado on it. She was a total pro about it and answered "yes" without skipping a beat. His response: "Oh. Because I didn't see avocado in the sandwich description."

I'd like to take this moment to point out that chicken was also not in the description of the sandwich. I guess this dude thought this item was simply named after the concept of chicken and avocado and didn't actually contain any.

I've been waiting tables at a casual but expensive farm-to-table type place in Vermont for a while. Customers are usually great, but we get the occasional odd duck.

A couple of weeks ago, a three-top sat in my section, a woman and two men, all middle-aged and well-off looking. They were nice, happy, chatty, and seemingly thrilled with everything. When it came time to order, one of the men informed me that he was lactose intolerant, so could he please have the pork but no goat cheese mashed potatoes? [Editor’s Note: Those of you shocked and salivating at this thought: Vermont DOES NOT FUCK AROUND when it comes to food. Seriously. They mean business up in the Great White North.] No problem, we get people with allergies all the time, and modifications are easy enough.

I put in the order with a note about his lactose intolerance and confirmed it with the kitchen. The chef offered to substitute some nice roasted fingerling potatoes for the goat cheese mashed potatoes. Perfect.

Another server ran the food, and on the way back from the table, he grabbed me and said the man who ordered the pork would like to see me about his meal. I went over, dreading that dairy had somehow ended up on the plate.

"Oh that's no problem," he says, "milk and butter don't have lactose in them."

I still don't know if he was pretending to be lactose intolerant because he didn't like goat cheese, or if he thinks chronic gas, diarrhea, and other assorted GI problems are just a normal part of life.

This didn't happen to me, but to my roommate, who works in the kitchen at a fairly well-known chain restaurant in the South. Some of the things he overhears from the wait staff are pretty hilarious, but this is the one that really stuck with us.

It seems one day he was loading the dishwashers when a plate of food, accompanied by a waiter who was barely holding onto his self-control, arrived. The waiter handed it to my friend and said, "I've got to get another plate made for my latest table. They sent it back. Guess why?"

My roomie looked at it and answered, "No idea, it looks great from here."

The waiter then told him, "Not according to my customers -- they sent it back because the broccoli is too green."

Rob's first reaction was to look outside to see if it was some of our other friends coming in to play a joke on him because they knew he was working that night. No such luck -- a couple he didn't recognize were sitting at the indicated table, and he could just overhear the woman still complaining about how green the broccoli was.

Maybe she would've preferred it bleached.

My first semester of graduate school, my cohort had a pro-sem class (basically a class to orient us to the PhD program), and the professor who ran it would have two of us bring in food for everybody each week. One woman was a vegan, and would always throw a fit because she could never eat the food that people brought (which was usually pizza, because it was fast, relatively cheap, and could feed a lot of people). We ended up having to get special things for her.

Toward the end of the semester, my whole cohort went out to dinner at a barbecue restaurant to celebrate one of the students’ birthdays. The vegan was sitting next to me and ordered what I like to call the meat bonanza burger: a burger with pulled pork and bacon on it. After the server walked away, I stared at her for a solid minute before asking, “I thought you were vegan?” to which she replied, “I am, but I eat meat when I want to.”