Story Of Mob-Run Fake 'U.S. Embassy' In Ghana Would Make A Pretty Good Movie, We Bet 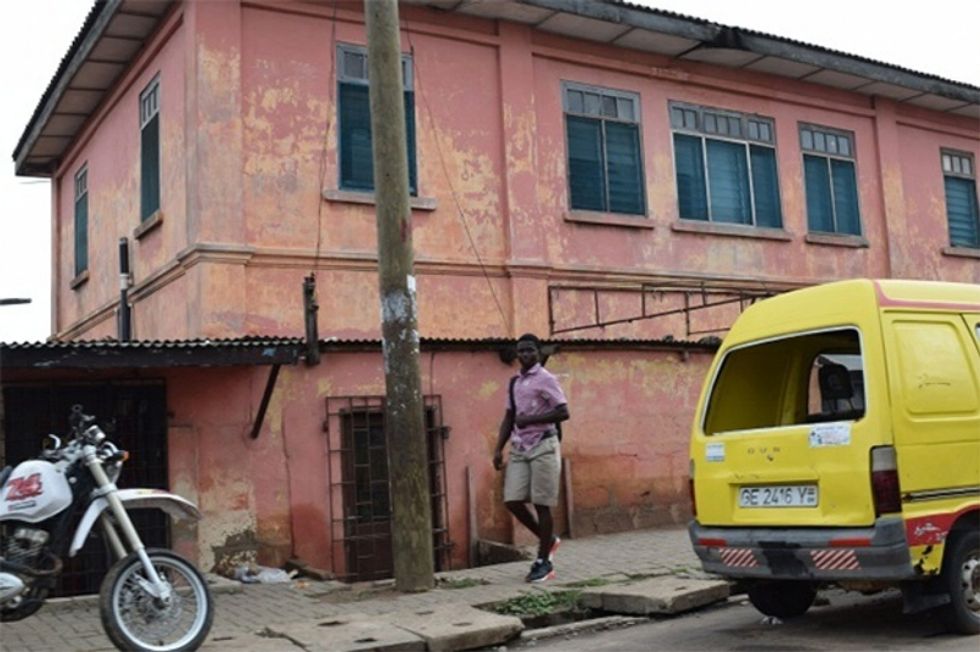 The real location's probably even available for filming now

That grotty pink building there may not look like much, but for 10 years, a criminal gang run by Turkish and Ghanaian organized crime managed to pass it off to would-be travelers from West Africa as the "U.S. Embassy" in Ghana's capital, Accra, where the criminals sold forged U.S. visas and other documents for $6,000 and up. The gangs bribed local officials to overlook the decidedly not-up-to-diplomatic-standards "embassy." It's a pretty incredible story, and you should go read the whole thing as reported in the Washington Post Monday.

Yes, yes, it was a criminal enterprise and we're glad it got shut down over the summer by real U.S. and Ghanaian authorities, because immigration fraud is bad, crime is bad, and so is ripping off people who may have thought they were dealing with the real U.S. Embassy (or maybe virtually none of the customers was fooled, either, and everyone just winked and pretended the enterprise was legitimate). But jesus, this would make a hell of a tragicomic caper movie in the right hands. We're betting the Ghanaian Steve Buscemi, whoever he is, would be great in it.

For a touch of realism, the crooks flew an American flag outside and had a portrait of Barack Obama in the main office, plus signs welcoming visitors to the "U.S. Embassy." The real U.S. Embassy is a much nicer complex of buildings in a wealthy part of Accra, complete with all the high security, fences and real staff you'd expect at a real diplomatic facility:

honestly, in a drought-prone region, they shouldn't have that lawn.

Maybe Frances McDormand could play the diplomat who gets wise to the fake embassy and helps shut it down. For the crime syndicate, you'd want a mostly African cast for International Cinema Legitimacy. Maybe to help ticket sales, get one or two big-name stars in the lead. Chiwetel Ejiofor, maybe, since we just saw Dr. Strange. And Idris Elba can't spend all his time playing James Bond, can he? (Yeah, we know he said probably not. Don't interrupt our movie fantasy with reality, OK?) Guest appearance by NPR's Ofeibea Quist-Arcton, because she's Ghanaian and we melt when she says "Accra."

Strangely, while the State Department quietly published a blog post -- not a press release -- about the bust of the fake embassy on November 2, the story didn't get much press attention until Ghanaian media picked it up last week. The fake embassy was shut down as part of a broader State Department operation in several countries to crack down on false documents, with the movie-ready name "Operation Spartan Vanguard." The State Department piece humbly notes that the ongoing operation has cut export of false documents by 70 percent in West Africa and has reduced criminal influence on other governments in the region. Also, everyone involved gets to say they were part of Operation Spartan Vanguard so they sound really badass.

The criminals ran a fairly smart operation, which is perhaps what appeals to the movie fan in us. This wasn't quite The Sting, but it was a pretty sophisticated low-rent con, and certainly would make for a good story, if any indie filmmakers are paying attention.

According to the State Department story,

The sham embassy advertised their services through flyers and billboards to cultivate customers from Ghana, Cote d'Ivoire, and Togo. Some of the services the embassy provided for these customers included issuance of fraudulently obtained, legitimate U.S. visas, counterfeit visas, false identification documents (including bank records, education records, birth certificates, and others) for a cost of $6,000.

Authorities also raided a couple of satellite locations, including a dress shop where the gang used an industrial sewing machine to sew bindings on the fake passports. The dress shop, the State Department story notes, was both a false front for the fake documents scam and a legitimate, open-for business dress shop that served regular customers off the street. Definite comedic possibilities there.

Evidence collected in the raids on the fake embassy and other locations included "a laptop computer; cell smart phones; 150 passports from 10 countries; legitimate and counterfeit visas from the U.S., the Schengen zone, India, and South Africa; and counterfeit identity documents." [link added -- Dok Zoom.] "Several suspects" were arrested in this summer's raids, although the exact number wasn't released; warrants are out for additional suspects still at large. Guest appearance by Harvey Keitel, maybe? He's in everything.

With all the fake news out there, maybe what we really need right now is a good ripping yarn about some decent hardworking con men putting in a dishonest day's work and running a fake U.S. embassy in a third world capital. It seems like it would make for a timely diversion from a reality in which the actual U.S. Government is on the verge of becoming a banana republic run by a former reality TV star.