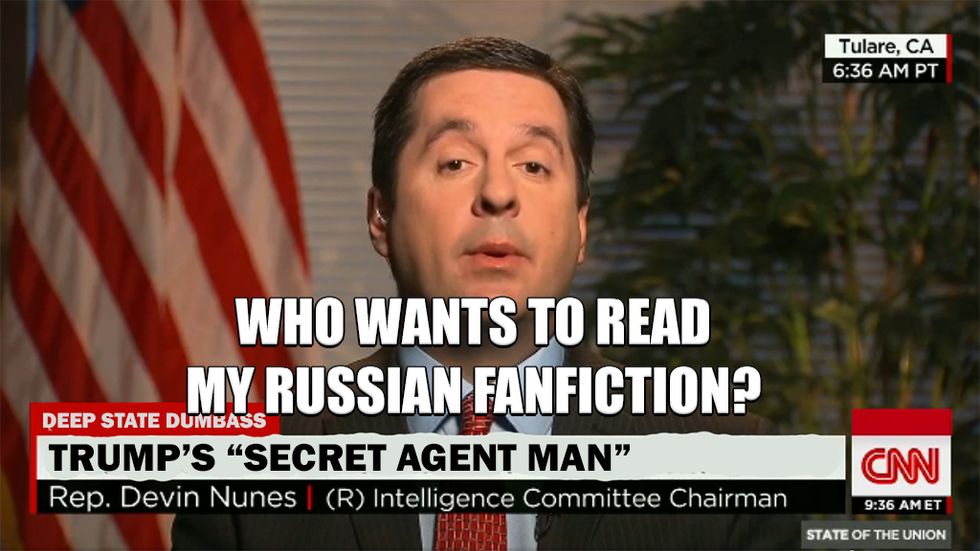 Morning Wonketariat! Here's some of the things we may be talking about today, but first, ADORABLE LITTLE PENGUINS!

Robert Mueller has been thinking hard about that meeting between DJTJ and the Russian lawyer lady now that Trump's former legal spokesweasel Mark Corallo noted his concern that Hope Hicks may have obstructed justice about possible obstruction of justice when she said the O.G. DJTJ emails promising "dirt" on Hillary Clinton "will never get out." Wait what? [Morning Maddow]

Yesterday (and for a year) we told you about how Devin Nunes is overflowing with bullshit, but late last night we learned Nunes and the White House have rewritten his/their Russian fan fiction when Ranking Member Adam Schiff tweeted that Nunes was trying to be a sneaky bastard (again).

Trump is pissed at FBI Director Chris Wray after Wray apparently violated his loyalty oath when he told the LIBERAL media that Nunes's book report was dangerous.

The FBI apparently knew about HER MISSING EMAILS for a week before announcing they'd found some in between Anthony Weiner's dick pics, but they sat on it because they didn't want to make a big stink (AGAIN). [Archive]

DJTJ tried to pick a Twitter fight with Joy Ann Reid during the SOTU, but Reid promptly slapped the sass out of his thumbs.

It cost Trump and the RNC $5 million Ameros in legal fees last year to defend themselves against ALLEGED Russian fuckery.

The pro-Trump PAC Liberty Action Group is trying to sell its mailing list for a million Ameros in order to make one last dash for cash before it collapses under the weight of its own scams.

Some government party poopers are trying to ruin Ben Carson's sleepovers by claiming Carson violated federal ethics rules when he let his kid invite all his Baltimore business buddies to a "listening tour," and they want him to explain why he keeps dragging his wife to all his HUD meetings.

Two American-Indian tribes are calling shenanigans on Interior Secretary and grifty bastard Ryan Zinke, claiming that Zinke's blocking them from opening up casinos that could hurt an ultra rich mega-conglomerate.

The director of the CDC, Brenda Fitzgerald, has been quit-fired after the lying LIBERAL media found out that she bought stock in big tobacco shortly after coming into office.

Tell your Not American friends and their families that ICE is going to be sending deportation agents to federal, state, and local courthouses to arrest people despite the loud noises coming from the bench and advocacy groups.

Congressional Republicans have shot themselves in the foot over the last three decades by stacking committees with party loyalists instead of policy wonks and geeks who actually know what they're talking about.

John Kelly is shit-talking a California high school teacher who told students that many people who enlist in the US military are "dumbshits," and not "academic people."

The Army released a public health notice warning soldiers that e-cigarettes with CBD oil will get you high as fuck after 60 people were hospitalized for getting super-duper stoned.

San Francisco will erase thousands of marijuana convictions en masse instead of forcing people to go to trial, as well as review and possibly re-sentence another 4,940 felony weed beefs. Far-fucking-out, man!

It's no secret that Missouri Republican Senate candidate Josh Hawley hates the feminazis, but MORE audio has emerged of Hawley railing about hairy whores killing Jesus by allowing men to sell handfuls of pussy into sexual slavery.

Furthering the notion that Republicans don't know what a shithole is, Blair Garber, the Illinois Lottery Control Board chairman, was quit-fired after he called East St. Louis the "shithole of the universe," which is (at the very least) a disingenuous assumption about a great number of shitholes.

The mayor of Nashville has announced that she was having sexy times with her head of security. Hopefully Melania has too.

A literal plague of locusts could descend on Russia and ruin the 2018 World Cup according to Russian officials hosting the futball championship. One official noted that Russia was trying not to "disgrace ourselves in front of global society..."

Students in Puerto Rico are learning to adapt to life without regular electricity. Luckily, FEMA reversed an earlier decision to pull out and stop supplying their half-assed aid to Puerto Rico. How generous of them.

AP has confirmed five mass graves in Myanmar full of Rohingya Muslims, and they're noting that there are likely to be more.

The Freedom of the Press Foundation announced that it's working with the Internet Archive to preserve Gawker now that trolls, MRAs, and whatever subspecies of creep Peter Thiel is have been trying to buy and scrub it from the web.

The massive security breach of GPS fitness trackers got worse after a user figured out a way to de-anonymize user data, thus allowing someone to view the names and movement patterns of people in top-secret buildings and military bases. We can also see who's making the sickest cardio gains and who's skipping leg day (Paul Ryan).

Last weekend Elon Musk started a flame war on Twitter when he announced he'd sell a flamethrower to make Ameros and kill zombies; last night Musk announced that he'd sold out, but there's still no word on how a flamethrower is good against a horde of zombies.

And here's your morning Nice Time! 360 degrees of Meerkats!

HEY! It's the first of the month and we need to pay our bills too! We're 100% reader supported and ad-free, so give us money to keep the penile enlargement pills away.