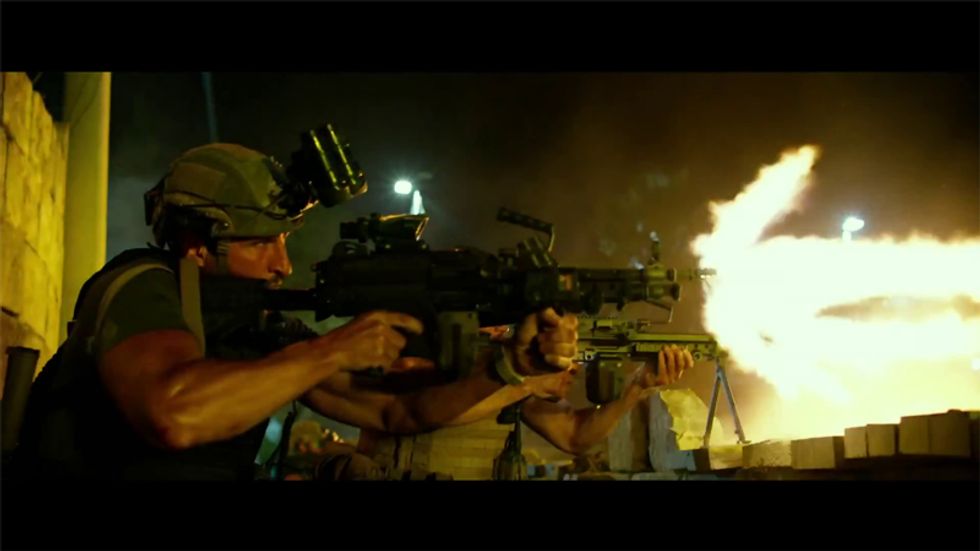 A historical documentary with Moar Dakka!

According to rightwing bloggers having jizzspasms over Michael Bay's new Benghazi movie, 13 Hours is certain to sink Hillary Clinton's hopes of ever being president. But this loud, excessively long (two-and-a-half hours, Alan!) wargasm doesn't actually mention the former secretary of state even once, because while it's definitely a political movie, it's not necessarily a partisan movie. Above all, it's a Michael Bay movie, which means the most important thing is blowing shit up while buff beardy guys do heroic stuff the guys in suits can never understand. This movie is pumped full of enough testosterone to require a warning that it may promote unwanted hair growth.

The story, adapted by Chuck Hogan from Mitchell Zuckoff's book, centers around six former special forces operators working as security for the secret CIA annex in Benghazi; they're fairly interchangeable as characters. Our audience identification figure is Jack Silva (John Krasinski), whom we meet as his plane lands in Benghazi at an airport littered with lovingly detailed burned-out airliners and populated by lots of scary Muslim people. Danger and exposition are everywhere; moments after Jack is picked up by fellow security operator Tyrone "Rone" Woods (James Badge Dale), the two have a standoff with Libyan radicals. They stare down the bad guys through the superior force of American willpower, stink-eye, and facial hair (plus pistols), and then arrive at the CIA facility. There, all the security operators are manly men (each with a tough-guy nickname) who know what's really going on, while the CIA doofuses running the place are clueless morons, especially the station chief (David Costabile), whose only name is "Bob" or often just "Chief."

Bob stands in for every pencil-pushing, politically correct wimp who ever held back American Military forces (or their contracted substitutes) from winning all our wars. We know Bob is an effete loser when he berates Rone and Jack for having tough-guyed their way out of the confrontation with the militia. He informs them the CIA agents are "Harvard and Yale" graduates who really know Libya, while the contractors are mere "hired help," there to be muscle when needed and otherwise expected to stay out of the way. It's excellent shorthand for whom we're supposed to root for and whom we should loathe. The Chief might just as well be wearing a pantsuit.

We then get about 45 minutes of exposition aimed at making clear the American diplomatic compound -- a mile away from the CIA annex, we're reminded several times -- is woefully insecure, plus a brief introduction to doomed Ambassador Chris Stevens (Matt Letscher), who's played as optimistic about diplomacy but hopelessly naïve about the possibility of peace in a place full of crazies like Libya. Also, we know Jack is a decent guy because he chats on his iPad with his wife and daughters.

Eventually we get to the good stuff on the night of September 11, 2012. Out of nowhere, a mob of Libyan terrorists materializes around the ambassador's compound, strolls through the gates, and scares off everyone from the locally hired Libyan militia that's supposed to provide security. The overwhelmed diplomats and their few CIA guards radio for help, and Ambassador Stevens is hustled off to a "safe room," which, thanks to Bay's shakycam and jump cuts, he appears to be hustled off to a dozen times.

This movie is not at all kind to Information Management Officer (IT guy for us civilians) Sean Smith, who was something of a towering geek hero in the online gaming community, and even kept messaging to his online gaming pals as the attack began ("FUCK... gunfire" was his last message). 13 Hours, told entirely from the security contractors' perspective, reduces Smith (Christopher Dingli) to a terrified nerd cowering in the background during the attack, and later a corpse for the manly men to haul back to the CIA annex. Forget the alleged electoral damage 13 Hours is supposed to do to Hillary Clinton; Sean Smith's family should file a defamation complaint.

Oh, but the combat scenes are some beautiful jingoism; as the Terrorist Hordes pour into the diplomatic compound, the burly security contractors -- just a mile away, as we may have mentioned -- prepare to go rescue them, but they're held back by Bob the gutless wonder. Bob doesn't want to expose the CIA annex's "secret" location to the bad guys, who of course already know it's there. He actually shouts at the operators to "Stand Down," although in mere reality, the Senate's investigation of Benghazi determined

"Although some members of the security team expressed frustration that they were unable to respond more quickly to the Mission compound," there was "no evidence of intentional delay or obstruction by the Chief of Base or any other party."

The Senate report cites a memo by the CIA deputy chief of base, who wrote that the actual chief authorized the contractors to go attempt to help at the diplomatic compound, and the real-life Benghazi base chief (whose identity is still classified) told the Washington Post that he never gave such an order. Nonetheless, one of the security contractors insists they were told to "stand down." We'll let you guys decide whether the multiple congressional investigations or the movie is more accurate on that point.

We jump back and forth between the six anxious heroes who could save the day if they're only unleashed, and the chaos at the compound, where some of the Libyan baddies take time out from their assault to fire AK-47s at the American Flag. This is what Michael Bay thinks is subtle symbolism. Spoiler warning: near the end of the film, the camera tracks through a window of the burned-out diplomatic villa and zooms in on the bullet-riddled flag floating with other charred flotsam in the swimming pool.

As things fall apart, Rone takes charge, telling Bob with manly resolve, "You're not giving orders anymore. You're in my world now," and off they go to try to save Stevens and anyone else still alive at the diplomatic compound. The rest of the movie is one long battle sequence punctuated by occasional "human moments" where we see our warriors are family men and readers of Joseph Campbell (bastard already fucked up the Star Wars prequels, and now Michael Bay has to have his characters quoting him?). After saving the few survivors at the diplomatic compound but not locating Ambassador Stevens, the special operators fight their way back to the CIA Annex in a set piece involving a high-speed escape in an armored Mercedes that simply cannot be destroyed, even with two tires aflame. We were only slightly disappointed when, once they reach the refuge of their base and pile out, the car didn't fly apart like the Bluesmobile.

Bay, who turns out action movie clichés like a Shenzhen factory produces cheap electronics, sets up the final Alamo-like battle for the Annex with a clearly doomed Rone preparing for the fight by tucking a photo of his newborn son into a pocket of his body armor; nobody who does that is going to make it out alive. Everyone wonders why they're not getting air support, since a quick cut just showed us a scene of F-16s fueled and ready to go at a base in Italy (reality again, not that it matters: the House Intelligence Committee reported that the fighters "were configured for training flights," not for combat, and by the time they could have been reloaded with bombs and ammo, the attack was long over). But in Bay's version, the enemy is as much American bureaucracy as Libyan terrorists: a CIA lady calls the airbase and begs them to at least send unarmed jets to buzz the annex and put the fear of God into the heathen enemy, only to be asked "what's your authorization?" Stupid pencil-pushers killed our boys!

To his credit, Bay actually presents one contentious detail of the Benghazi attack accurately, and in contrast to the Fox News version: where rightwing myth insists that Ambassador Stevens' body was "dragged through the streets" by a blood-crazed mob, the movie has the CIA station chief getting a call that Stevens was carried by friendly Libyans to a hospital. The movie even reproduces the initial reports that Stevens was still alive, which were later proved to be an optimistic rumor -- he had actually died of smoke inhalation in the "safe room."

Then it's on to the final battle, in which even the characters talk about being at the Alamo. Wave after wave of Libyans attack the annex; fortunately, Our Heroes are armed with updated versions of Hollywood Western guns which take down several bad guys with each round fired. Someone with plenty of patience might have a fine time comparing the actual number of Libyan casualties at Benghazi with the body count in 13 Hours; we'd guess the film exaggerates by at least an order of magnitude. Bay conjures up a bomb-laden bus that didn't exist in reality and then blows it up, spectacularly. In a moment of pure masturbatory self-indulgence, he even repeats one of the stupidest "oh wow" scenes from his 2001 Pearl Harbor: through the magic of CGI, we see a fatal mortar attack on the annex from the point of view of the mortar round itself. If we suspected Michael Bay of having an ironic bone in his body, we'd call it self-parody, but no, this is a tribute to his own genius as an action movie director.

At long last, the Libyan military and some additional Americans show up to take the survivors off to the airport, and we get the deep concluding thought of the movie: One of our heroes says to the Libyan translator who's proven himself in combat and is now heading home, "This country’s gotta figure this shit out," which is a pretty dismissive thing to tell a guy you've just fought alongside. But it's what passed for a foreign policy moral in this movie: Stupid Libyans gotta get their shit together. And let's let the military win next time, OK?

Also, Fox News moron Andrea Tantaros has proclaimed that "if anyone sees this movie ... and then goes on to vote for Hillary Clinton, they're a criminal." We suppose we'd better consult an attorney, although we're a bit uncertain about what charges to expect.