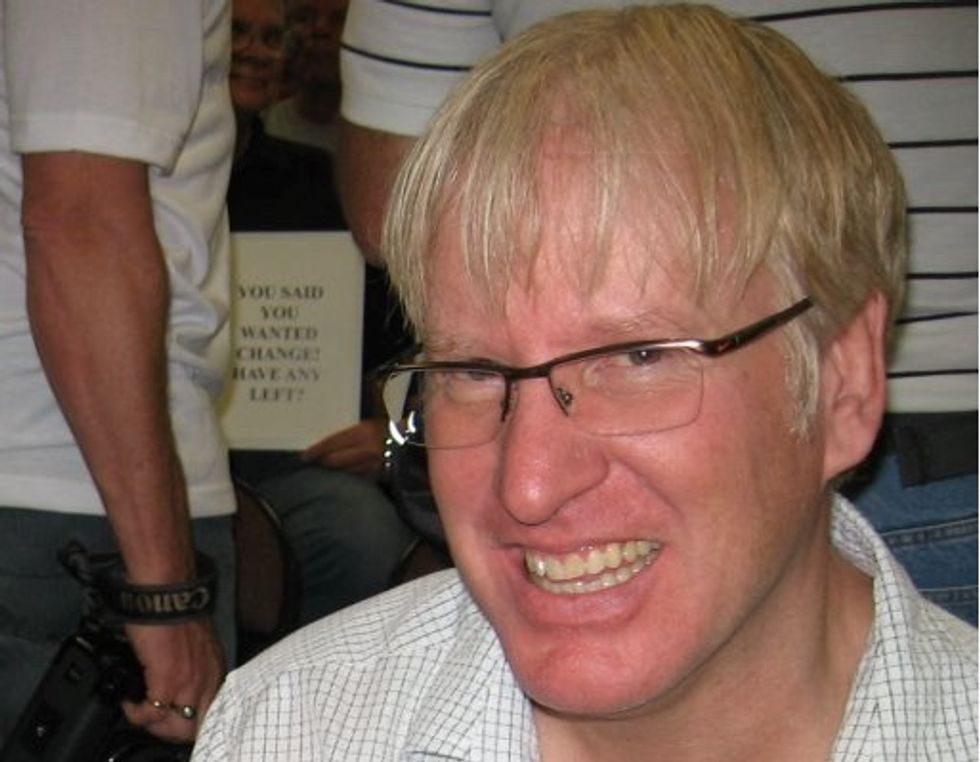 "I am a gay American. Also, I hate the Muslins."

Oh dear, what mixed feelings we are having upon finding out that Jim Hoft, AKA The Gateway Pundit, AKA The Stupidest Man On The Internet, is a card-carrying You So Gay! On the one hand, we do not come to act all high 'n' mighty 'n' liberal, and suggest that somehow Hoft is not a real gay. In fact, we bet he is doubleplus good at suckin' the peen, or at least we will charitably suggest that he is.

We also do not come to suggest that his piece for Breitbart on Monday, in which he, coming out as a gay man, reacts to the horrific Orlando shootings, comes anywhere but directly from his heart. Because here's why:

But last night at least 49 gays were slaughtered at an Orlando club. [...]

I can no longer remain silent as my gay brothers and sisters are being slaughtered at dance clubs. [...]

That is all valid, heartbreakingly so. But do you see all those ellipses? That is where the epic shitstorm of stupid exists, the part where Jim yanks the crown off Breitbart's Milo Yiannopoulos's head and establishes himself as, officially, the Stupidest Homosexual On The Internet.

[wonkbar]<a href="http://wonkette.com/602886/are-the-orlando-gay-club-shootings-about-you-or-should-you-stfu-a-wonksplainer"></a>[/wonkbar]Around the country, LGBT Americans and allies are seeing that, ON TOP of how the killer Omar Mateen seems to have been motivated in part by Islamic extremism, he was obviously primarily motivated by anti-gay hatred. The ISIS shit is kinda tacked on at the end, quite frankly. Hell, there are reports that Mateen checked out several other gay establishments before choosing Pulse, the gay club he shot up. He hated gays, specifically.

Jim Hoft does not see that. He only sees ISIS ISLAMOJIHADI-AYIIIIIIIEEEEEEEEEEE!!!!!! Claiming that his people, the gays, need to "come home" to Donald Trump and the Republican party, he says this:

Despite this obvious Islamic attack, Barack Obama and Hillary Clinton are still in denial.

After the deadliest Islamist attack on American soil since 9-11 Barack Obama blamed hatred and guns. His inability to called the attack what it is – Islamic jihad – has progressed from denial to psychosis. It’s never been more apparent than Sunday, when Barack was comparing the Pulse club attack to a movie theater shooting by a schizophrenic, that our poor president has lost his own grasp of reality.

Jim then posts a tweet from Sally Kohn, saying that she "blamed all religions." Wonkette readers are invited to read Kohn's tweet with their brains and their reading comprehension skills, to see if that is what Kohn said:

As we said, Jim Hoft is a very stupid man.

[wonkbar]<a href="http://wonkette.com/602908/walid-shoebat-pastor-steven-anderson-orlando-mass-murder"></a>[/wonkbar]The truth of the matter is that the people in America who are completely evil toward ALL MUSLIMS tend to be the very same people who are evil toward ALL GAYS. Likewise, Americans who hate LGBT people are usually motivated by conservative extremist religious belief, whether it's Christian, Muslim, Jewish or the God Hates Fags sector of the Flying Spaghetti Monster church. (Tsk tsk!)

They seem nice, and there are many more where that came from. They are the people Jim Hoft has given a home, at his dumbshit blog. And they have some blood on their hands. They are part of why Jim Hoft is grieving right now, and he doesn't see it. He'd rather scream about the jihadi menace and let people call him a dirty faggot in the comments.

Like we said, we do not doubt Jim is a real, bona fide, three-Michelin-starred gay man, and we are certain his feelings of mourning today are genuine.

But God, what a fucking moron.