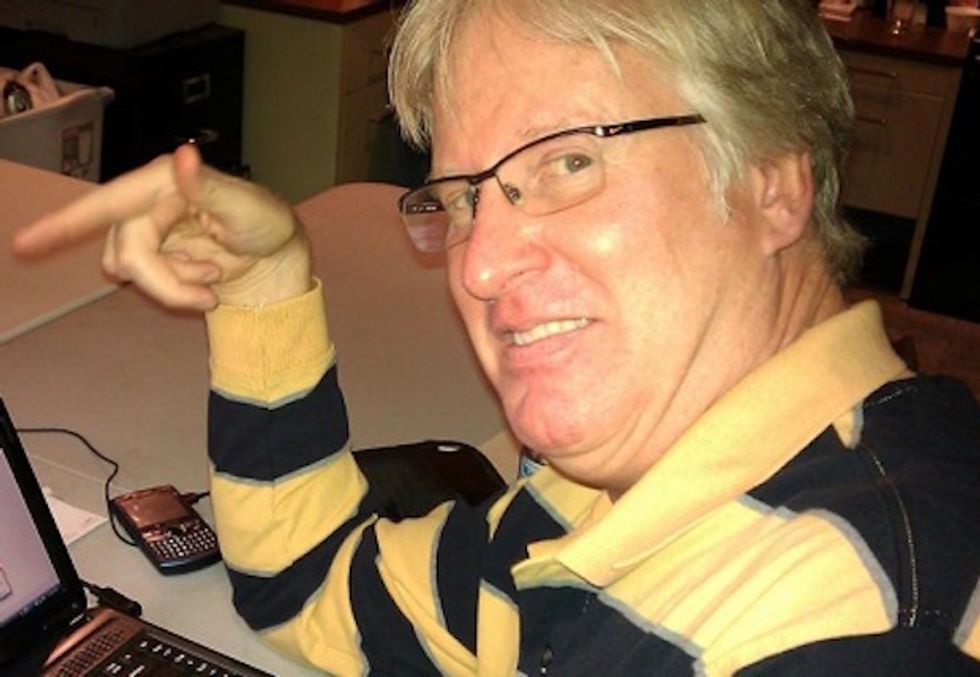 There's just no end of weird reactions from rightwingers trying to make the accusations against Roy Moore go away. The really big story here is that instead of simply proclaiming the Washington Post's story about Moore's (alleged) molestation of an underage girl is completely fabricated -- though plenty of rightwingers are claiming that -- the WaPo reporting is so carefully sourced, with women going on the record by name and others backing up their accounts, that far too many wingnuts have decided that it's both true and no big deal, because Virgin Mary or it was a long time ago or they'd rather have a child molester in the Senate than a Democrat.

Over at the Gateway Pundit yesterday, Jim Hoft, the Stupidest Man on the Internet, decided to go both ways: It's fake news cooked up by the liberal media, and even if it's not, it's no big, because in 1979, "minors" were only people under the age of 12. Here's Hoft's original headline, illustration, and lede; he has since changed the hed without any "update" notice:

Yes, he actually said "dating." Which we suppose is perfectly accurate as long as you don't mention what Leigh Corfman says happened on their second "date." In typical Hoftian fashion, the piece blockquotes several paragraphs from the WaPo story -- but only the part about Moore meeting Corfman and her mother outside a courtroom, not the explicit details of his taking off her pants and top and touching her outside her bra and panties and trying to put her hand on his peener. Perhaps Hoft was simply trying to keep it clean for his family-friendly blog. After citing Moore's angry denial, though, Hoft drops this bit of (erroneous) wisdom, which remains in the current version of the article:

Now, where the hell does he get the idea that the age of consent in Alabama in 1979 was 12, not 16? He cites Alabama statute, but the relevant 1975 code he mentions explicitly lists 16 as the age of consent; it was not "later raised to 16":

Now, we think we've found the hair-splitting that Hoft is pretending means a 14-year-old girl was not actually a "child" in 1979. In the statue defining second degree sexual abuse, Section 13A-6-67, the offense is defined as a Class A misdemeanor, and applies to anyone who "subjects another person to sexual contact who is less than 16 years old, but more than 12 years old." See? It's person, not child!

These people think they are morally superior to the rest of us.

Of course, there's that pesky matter of "consent," there all along and very explicitly stating no one under 16 can give consent, even in 1979. We doubt Jim Hoft is actually this stupid -- he's smart enough to know he's playing the old "He's not a pedophile! He's a hebephile, or maybe an ephebophile!" game here, and suggesting that even if Roy Moore, at the age of 32, grabbed a 14-year-old's breasts and genitals through her underwear, he wasn't actually molesting a "minor" -- he was just on a date. And as other Republicans have insisted, 16-year-olds are fair game for any man in his 30s, also something something Bible.

Should we even mention how Hoft and pals would react if a Democrat tried to claim that molesting a 14-year-old wasn't really all that bad because the state had even harsher punishments for molesting a 12-year-old? Not even Anthony Weiner tried that shit.

Interestingly, Hoft's readers aren't even going with the convenient excuse-making Hoft provided for them: They're just calling everyone the Washington Post talked to a filthy socialist liar, and demanding they be sued for defaming a Good Christian Man. Jeez, people, way to not even pick up on the hint. And Hoft, perhaps sensing he wasn't getting anywhere, has slapped on this new headline, emphasizing it was a long time ago and the lib media is the real bad guy:

As of this morning, though, he still says WaPo is accusing Moore of "dating" a 14-year-old.

Yr Wonkette is supported by reader donations. Please click here to donate, and to help us get a new pair of waders -- the sludge damn near ate through the ones we wore to write this. And while you're at it, help Doug Jones beat Roy Moore!