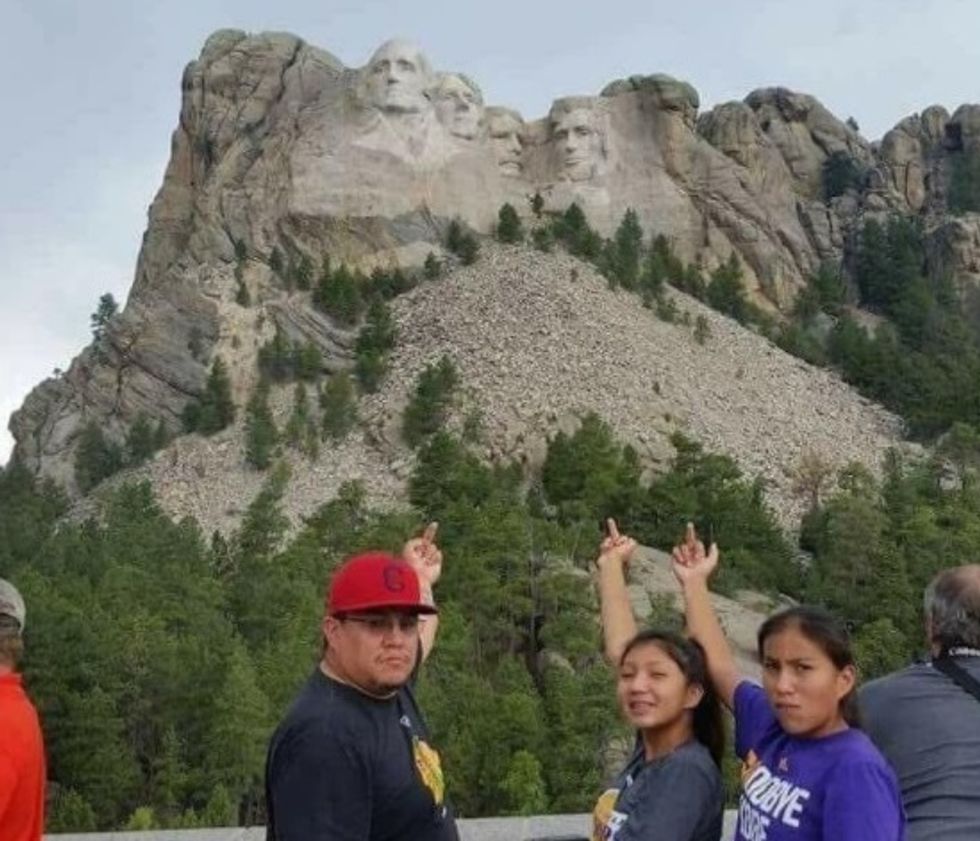 Flipping off Mount Rushmore is not in the Constitution!

Lucian Wintrich, the Milo-in-Training of Jim Hoft, the Stupidest Man on the Internet, found a thing to be outraged about over the weekend: a photo of three of those people flipping off the big stonefaces of Mt. Rushmore. He has a very important thought for stupid clueless liberals everywhere to consider:

It's true: "Why did we ever let these people into our country if they treat our sacred places like this?" is certainly what the Lakota people have long thought about the theft of their land and the desecration of the place that used to be called Six Grandfathers. Unfortunately, it's a little late for them to toughen up the lax immigration laws of 1492, so the interlopers stayed and decided the place belonged to them. And now the descendants of the invaders wish there were some way to send rude indigenous people back where they came from, or something.

Wintrich's Tweet was met with some enthusiasm by one guy, who thinks it's awfully hypocritical of people to come from foreign lands and wave their foreign flags around here, unless of course it's an Irish flag in his own Twitter profile:

Most of the replies were a bit more scathing in pointing out that the stupid bigot wasn't even being a bigot in the right direction -- the whole thread is good for a laugh. One set of replies came from a Tweetperson who thought maybe those words were being applied to the wrong foreign intruders:

Our favorite exchange involved a guy who didn't really seem to understand who the First People on this here continent actually were:

If they don't look British or Native Indian, then what the hell are they and why aren't they Making America Great Again, huh? Shouldn't these decisions be up to The People of America, who really know and love the place?

Finally, the single best reply of all, for our money (19.99, once we get the shirts made):

"Wow, how do you not fall over more?" is now the Official Wonkette Rejoinder to anything written at the Gateway Pundit. That, and "Pay the fuck up."

UPDATE: Oh, hey! Lucian Wintrich noticed our article, and not only does he not dispute our assessment of his intelligence, he confirms it:

Lucian. Dude. Wow, how do you not fall over more?