Success Of Brexit Vote Inspires Slack-Jawed Yokels To Demand 'Texit.' Get It? 'TEXIT'! 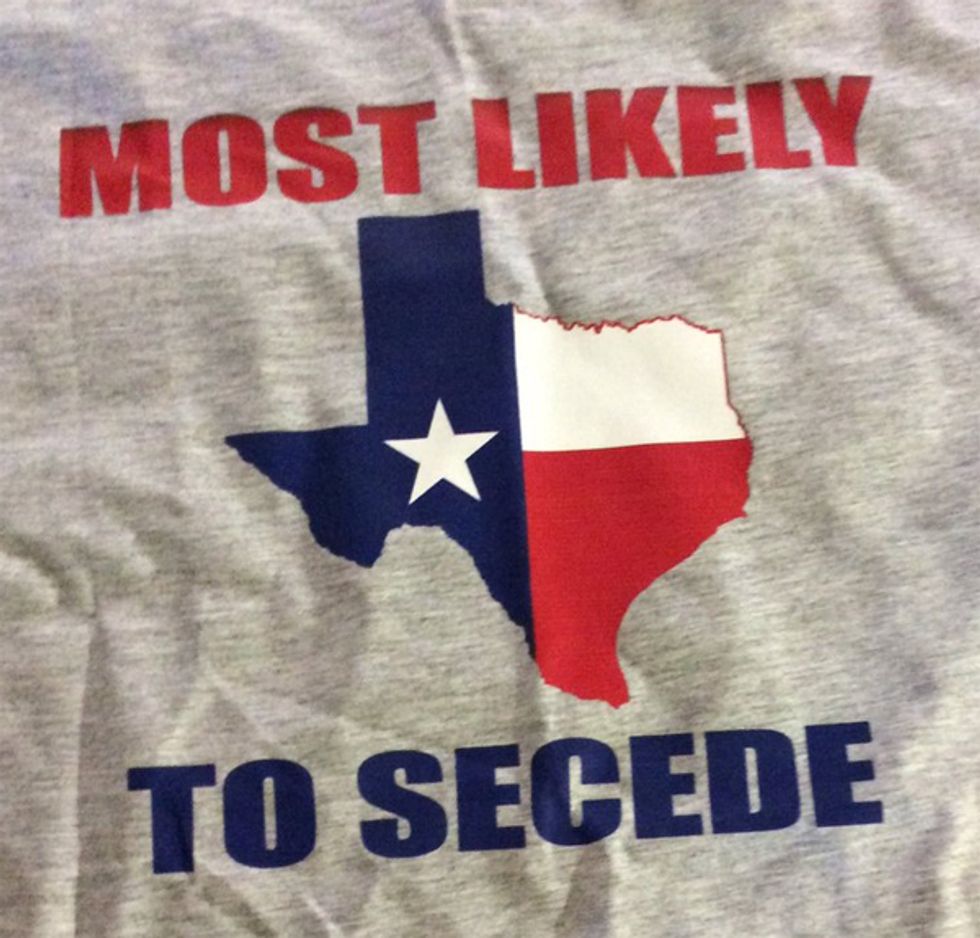 You do realize we're going to keep the military bases...

Heartened by the glorious self-determination vote in the United Kingdom (not to mention the imminent global economic collapse), secessionist dipwads in Texas are thrilled at the prospect for "Texit," since they appear to think that the unpleasantness of 1861-1865 hadn't settled the question. Sure, secession may be completely illegal -- as confirmed by the Supreme Court in an 1869 case involving Texas -- but that's no hindrance to the dreamers of the "Texas Nationalist Movement," who are pretty sure the Supreme Court doesn't count either. Here's what Daniel Miller, the head honcho of the TNM, said to Australian news outlet News.com.au:

Mr Miller says the core reason for the movement is a firm belief that the best people to govern Texas are the people of Texas, as opposed to the Washington-based federal government.

“At this moment, we don’t enjoy that right,” he said. “The vast majority of the laws, rules and regulations that affect the people of Texas are created by the political class or unelected bureaucrats in Washington.”

Miller didn't specify what those oppressive "laws, rules and regulations" were, exactly, but we'd be willing to bet they have to do with taking away Texans' sacred rights to dump toxic sludge, tell Those People (for multiple values of THEM) to get the hell out of their restaurants, and something something all the guns. And they're a hugely popular movement, claiming to have over 260,000 members, although of course that also includes however many trolls signed up just for laughs. Out of a Texas population of 27 million, that sounds like a pretty impressive drop in the bucket.

[wonkbar]<a href="http://wonkette.com/589317/texas-separatists-find-new-freedom-loving-president-vladimir-putin"></a>[/wonkbar]Plus, they've got at least theoretical backing from Vladimir Putin, kinda sorta, if by "backing" you mean Putin tried to justify Russia's generous liberation of Crimea from the clutches of Ukraine with some bad history. Putin once chastised the USA for "grabbing Texas from Mexico all those years ago, which if you want to get all technical, isn't what happened at all. And the "Texan Nationalists" who think Texas never actually gave up its "right" to secede when it joined the Union are, to put it briefly, wrong. You know, that 1869 Supreme Court decision again. If you want to hear that again in some pretty Nineteenth Century Talk, here's Chief Justice Salmon P. Chase on that very question:

The union between Texas and the other states was as complete, as perpetual, and as indissoluble as the union between the original States. There was no place for reconsideration or revocation, except through revolution or through consent of the states.

Buh ... buh ... but I got a website right here that says we CAN secede, and literally thousands of Texans want to! Why can't we, huh? The more important question, of course, is "When will people start naming kids 'Salmon' again?" (Answer: Give the Palins time.)

[wonkbar]<a href="http://wonkette.com/484466/wonkette-book-club-should-the-south-just-go-ahead-and-secede"></a>[/wonkbar]Tempting though it might be to simply cut the doofuses loose, with perhaps a demand that a humanitarian corridor be maintained between the real USA and Austin, it's not going to happen, no matter how appealing the fantasy of yelling "Don't let the door hit yer ass on the way out!" might be. But every now and then the "Texas Nationalists" will pop up, and Wonkette will enjoy pointing and laughing at how much they like cozying up to neo-Nazis.

Besides, an independent Texas would be a danger to itself and others, and we'd eventually just get dragged into a UN peacekeeping mission to keep it from causing trouble.