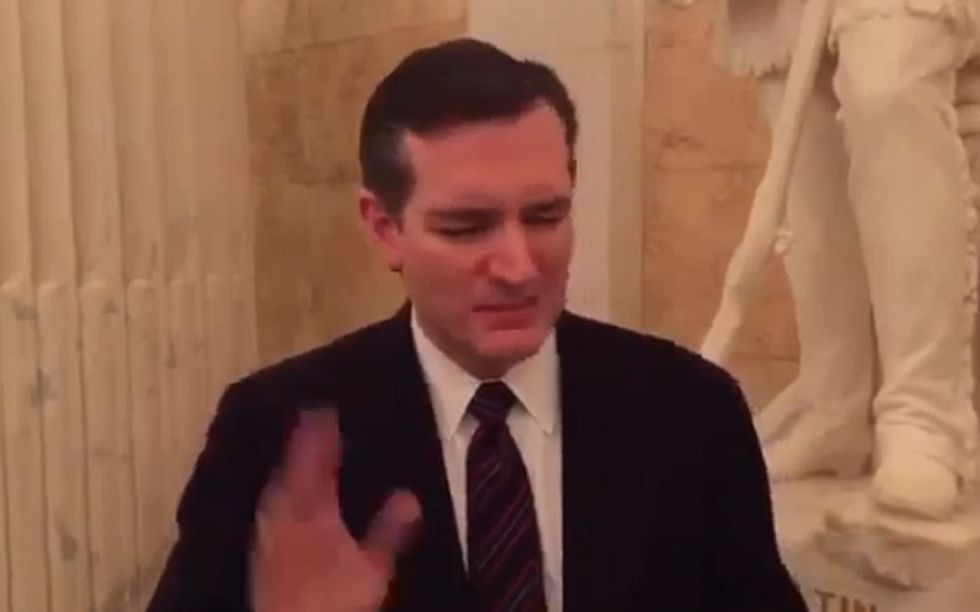 In a bizarre attempt to earn their six-figure paychecks for a change, a sufficient number of congressional Republicans agreed with Democrats that Sen. Ted Cruz sure is a moron, and also, it would be a good idea to keep the lights on in America, at least for another few months:

With only hours to spare on the last day of the fiscal year, Congress approved a temporary spending measure to avert a shutdown and keep the federal government operating through Dec. 11. [...]

The temporary spending measure will keep the government operating at roughly last year’s levels — a rate of about $1.017 trillion a year, with some notable changes for emergency situations such as $700 million to fight wildfires in the West.

Hooray, we get to take the country to the brink of catastrophe all over again just in time for Chanukah, happy happy joy joy! But Speaker John Boehner will be long gone by then, and whichever unlucky bastard inherits his gavel will get to whip out his dick to compare with Cruz's, which supposedly tastes like ammo and bacon.

As the Times notes, the House was only able to get its act together thanks to Democrats, and basically NO THANKS to Republicans, except for RINO John Boehner (R-Outta Here Soooo Soon) and a few other fake conservatives:

In the House, the measure was approved only because of strong support by Democrats — a sign of just how angry rank-and-file Republicans remain over their powerlessness to force policy changes on the Obama administration.

This has not stopped conservative nihilists from getting yesterday's dirty underwear all knotted up deep inside their butt cracks. Here's Ben Shapiro, editor-at-large at Dead Breitbart's Interweb Home For Wayward Closeted Coked-Out Anger Cubs, who is also cheating on Breitbart's ghost with some other interweb place:

Speaker of the House John Boehner (R-OH) made sure to toast Barack Obama one last time before leaving office, and roast conservatives in the process.

Oh yeah. LOL. That's the other thing. Contrary to the urgent emails and fundraising pitches and speeches and investigations and hearings and wall-to-wall outrage in the wingnutosphere, Congress somehow managed to pass this temporary funding bill without defunding Planned Parenthood. Just like the majority of Americans wanted. No wonder Shapiro's dick is so cranky.

But it's not as if Republicans missed their opportunity to make a symbolic and utterly empty gesture about how seriously, for reals, you guys, they super hate Planned Parenthood. They were allowed to have a fake vote -- an "enrollment correction," they call it -- that does not actually do anything except put their names on the record as hating Planned Parenthood, which we already knew:

Aw, poor crybabies, they only got to have a pretend vote, not a real vote, although that seems about right for a bunch of supposedly grown-ass boys and girls who are pretending to be congresspersons.

Sen. Ted Cruz, who's been throwing an oh-so-riveting series of hissy fits on the Senate floor since July because the members of his own party refuse to do his bidding and shut down Planned Parenthood and/or the government, did not immediately comment -- probably because his mouth was full from all his Republican colleagues who can't stand him taking turns pissing in it. Poor guy.

As per usual when Congress bothers to do a quarter-assed job at anything at all, the members will now go home to enjoy a week-long vacay for Columbus Day, which lasts a whole week if you are a member of Congress, how nice for them. Then they'll return to DC, tanned, ready and rested, so they can get back to the important work of getting nothing done at all, before they have to gear up to drive us to the edge once more in December.