Sultan Of Brunei Getting His Sharia All Over Your Hotel Towels 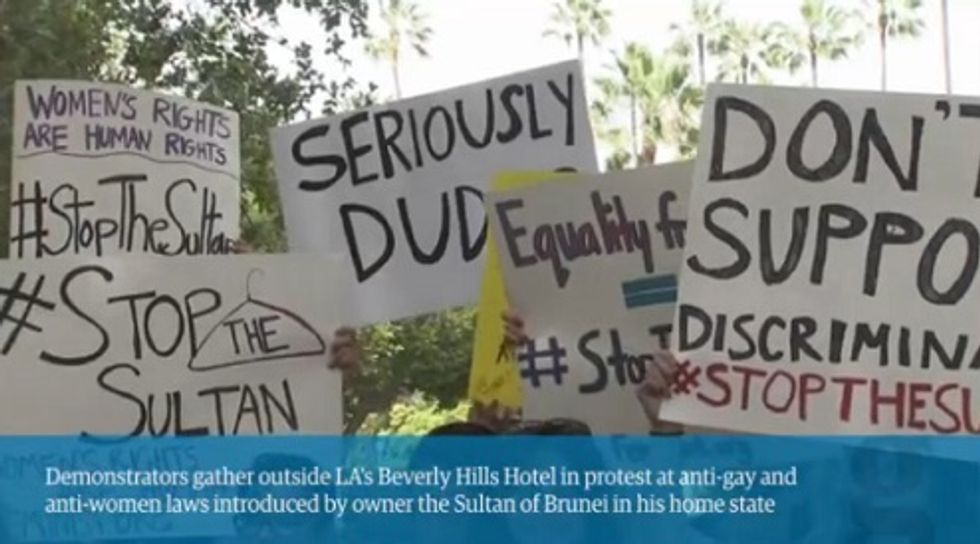 So, it turns out that there are two kinds of "sharia law." One is the kind that teabaggers and paranoids think is sneaking into all the schools because some 11th-graders in a language club said the Pledge of Allegiance in Arabic. You know, the completely imaginary kind. The other is the actual system of Islamic law that is actually really kind of strict and terrible and is practiced by reactionary tyrants because one eternal truth of politics is that you can always get away with authoritarianism if you slather it with enough godspittle.

Take, for instance the Sultan of Brunei (please!), who announced last year that he would convert his oil-rich monarchy to Full Sharia Nastiness, complete with flogging, dismemberments, and stonings. Now, this may come as a surprise to American wingnuts, but while your basic progressive laughs at paranoia over imaginary creeping Sharia, that same progressive is pretty likely to not be a fan of the real thing, which is not friendly to women or to human rights. (This does not make us "hypocrites" so much as it makes us "capable of distinguishing real bad things from paranoid delusions.") And so, as a means of protesting the imposition of real Sharia in Brunei, your Hollywood types are boycotting the Sultan's real estate holdings, like for instance hotels owned by the Dorchester Collection, such as the Beverly Hills Hotel and the Hotel Bel-Air, and which is why we have headed this post with Sir Patrick Lobsterboy Stewart, who just a short while ago tweeted, "Absolutely delighted to learn that @20thcenturyfox has moved #XMen out of a Dorchester Group hotel for our London premiere." We agree with Captain Jean-Luc Xavier, and frankly would get behind economic sanctions against Brunei, too. (As to whether lobsters themselves are halal or haram, we really don't care.)

We are also glad to see that people are picketing the Beverly Hotel, and that celebrities like Jay Leno (auto-play video) are joining in. Yes, even if some silly person is carrying a sign what says "Seriously Dude??"

Maybe especially because someone has that sign. And Mavis Leno is on the board of Feminist Majority, which will be moving its annual fundraiser to another hotel.

Will any of it make a difference? Damned if we know -- we'd like to think international pressure could achieve something, but being liberal wimps, we're also not going to go calling for drone strikes, either. (This time.) Mostly it's just nauseating, and so you do what you can -- yell at a hotel, buy a different product, give to Amnesty again (even if it means being on their mailing list forever), point out that moving away from oil is one way to make us less dependent on fuel from dictators, even friendly rich ones.

It beats freaking out over the thought that somewhere in a public building, Muslims may be washing their feet.

Follow Doktor Zoom on Twitter. He is not a fan of fundamentalists, regardless of what they think is fundamental. Except Reading. Reading IS Fundamental