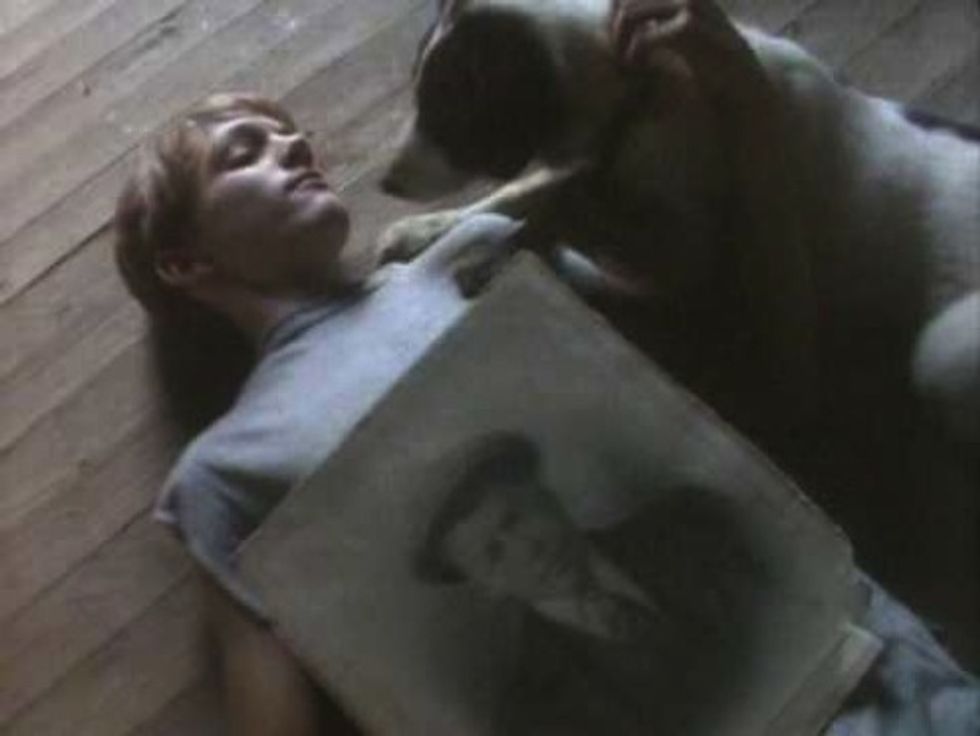 You already know the big news, like how the gubmint is going to shut down because the GOP didn't get a lollipop or something, so you don't need us to 'splain to you about what how the NYT is talking about it. But let's not limit our sad to national politics, ok? The NYT shows us how to take it to the next level and be really really stupendously depressed all over again about Texas politics. Yay!

Would you like to know who is on the board of Texas' biology textbook panel, which sets the standards for what goes in those textbooks? Sure you would!

One is a nutritionist who believes “creation science” based on biblical principles should be taught in the classroom. Another is a chemical engineer who is listed as a “Darwin Skeptic” on the Web site of the Creation Science Hall of Fame. A third is a trained biologist who also happens to be a fellow of the Discovery Institute, the Seattle-based center of the intelligent-design movement and a vice president at an evangelical ministry in Plano, Tex.

NYT, you are bumming us out way too early today. How about something a little lighter??

Normally, we would mock the ever-loving shit out of some guy who explained that eating out every evening to the tune of $100/pop is therapy for him, but this dude is 103 and adorable and should do whatever the fuck he pleases. We can't even fathom the level of NiceTime in that article and we are not allowed to cut and paste the whole thing, so here's a quick summary. Lovely old gentleman is 103. He marched with protestors during the Russian Revolution before his family fled to the United States. He made a fortune in the office supply business. His wife of 70 years - 70 YEARS - passed away five years ago, and after that, he tried things like activity and singles groups, but it didn't work out. So, he goes out each night. He dines in a lovely restaurant, because he can, and because then he has people to talk to. He lies about his age and tells people he is only 90, because if he tells them he is 103, they only want to talk about that. He would still like to meet a nice lady to join him for dinner, as his recent 6-month relationship with a 90-year-old lady didn't work out. We love this little old man so much we can hardly stand it.

Also in the "should be too precious and twee and murder-inducing but is really quite lovely" department this week is the story (and pictures) of a man who builds 1/12 scale dioramas of various storefronts in NYC:

Mr. Hage was initially drawn to the ironwork of SoHo, but now he has to go to Bedford-Stuyvesant, Brooklyn, or farther to find streetscapes that speak to him. “I’ll go to Flatbush Avenue and walk from Prospect Park out to the end, because that’s what Manhattan used to be,” he said. “This show is about rekindling experiences of what it’s like to be in those neighborhoods, or bringing back a taste or a smell, those visceral recollections that mean so much to us.”

The pictures of these little tiny pieces of NYC are legit beautiful and you should go look at them.

Loins girded from some NiceTime? Cool. Let's move on to the reliable topic of how the rich are just like you and we, except they get to spend a bazillion dollars on housing to...live with their parents in a compound? Th' fuck??

At 10 Madison Square West, a 125-unit condominium at West 24th Street where asking prices top $4,000 a square foot, four separate families are hoping to create multigenerational homes. In each case, parents bought apartments for themselves and then a second, noncontiguous unit for their adult children.

It was the same at 150 Charles, a luxury condominium under construction in the West Village: two families have each bought two units. “We think it is fabulous, just a beautiful, special thing that the families will eat meals together, spend time together,” said Steven Witkoff, the developer who is building both 150 Charles Street and 10 Madison Square West.

Eating meals with our parents every day, as grown-ass people, is not something we would consider beautiful and special, but maybe that is because our parents have not yet purchased us a squidzillion-dollar apartment??

There's some absurd new feature in this week's Times where they ask "tastemakers" to talk about their favorite getaways, which will just remind you how poor you are. This week, Norma Kamali goes on and on about her South of France olive oil tasting trip, which we have no doubt is on your agenda for fall as well.

You can also up your chagrin-o-meter by reading about how college students can no longer be bothered to check email:

Morgan Judge, a sophomore at Fordham University in New York, said she thought it was “cool” last semester when a professor announced that students could text him. Then she received one from him: “Check your e-mail for an update on the assignment.”

Are 19-year-olds millennials? We have no idea but we hate this kid a lot.

Now that we're all revved up and nicely irritated, let's move to our perennial headliners, the horrible trio, the terrifying trifecta, of Dowd, Friedman, and Douthat.

Dowd is probably the least objectionable of the nitwits today as all she appeared to do this week was take a field trip to the NSA data center in Utah. But because it is Dowd, it is weird, and it starts with her little trip down main street:

At the Husband and Wife lingerie store here in Mormon country — where babies are welcome amid the sex toys and the motto is “Classy, tasteful and comfortable” — no one had heard of it.

At the Allami smoke shop across the street, adjacent to a hypnosis center that can help you stop smoking, they were disturbed by it. Down the road at Quiznos, the young man making subs went on a rant about his insular community’s compliance with the government’s intrusions into Americans’ private lives.

Indeed, this valley of subdivisions, sagebrush and one of the remaining polygamous sects gets more exercised about the letter “c” — there’s a Kapuccino cafe, a Maverik convenience store and a Pikasso print shop — than they do about the National Security Agency’s secretive new $2 billion, one- million-square-foot data death star.

BREAKING: NSA data thing-y is in a town where there are other things, and the New York Times is ON IT. And be honest, how may times did you have to read that "letter 'c'" sentence before it made sense? It took us about eleventy. Also, we are sorry not sorry that your brain now needs a Silkwood shower because you're thinking of Maureen Dowd in a sex shop.

Ross Douthat thought it would be a good idea to go all media critic on us and share his feels on Breaking Bad. Because it is Douthat, it derails into some sort of twaddle about Judeo-Christian ethics versus Darwinian logic and then takes a hard right into full-fledged derp as he explains to you how Breaking Bad is really a rejection of the hegemony of science:

Indeed, by making Walt a chemistry genius, the show offers an implicit rebuke to the persistent modern conceit that a scientific worldview logically implies liberalism, humanism and a widening circle of concern. On “Breaking Bad,” that worldview just makes Walt a better kingpin, and the beautiful equations of chemistry are deployed to addict, poison, decompose.

Or they could have made him a chemist because, you know, it was kinda necessary for the story arc that he know how to make meth.

We've been dreading Thomas Friedman's column this week because you know he will talk about Iran and you know it will be full of Friedman Insights and...gah, we just can't do it. Go read him if you dare dive into the self-indulgent swamp that is Ton Friedman on geo-political happenings. For our part, we're going to leave our beautiful minds ignorant of and unsullied by the mustache for today. If you choose to read it, maybe you should cleanse your mental palate afterwords by reading about that awesome 103-year-old guy again.