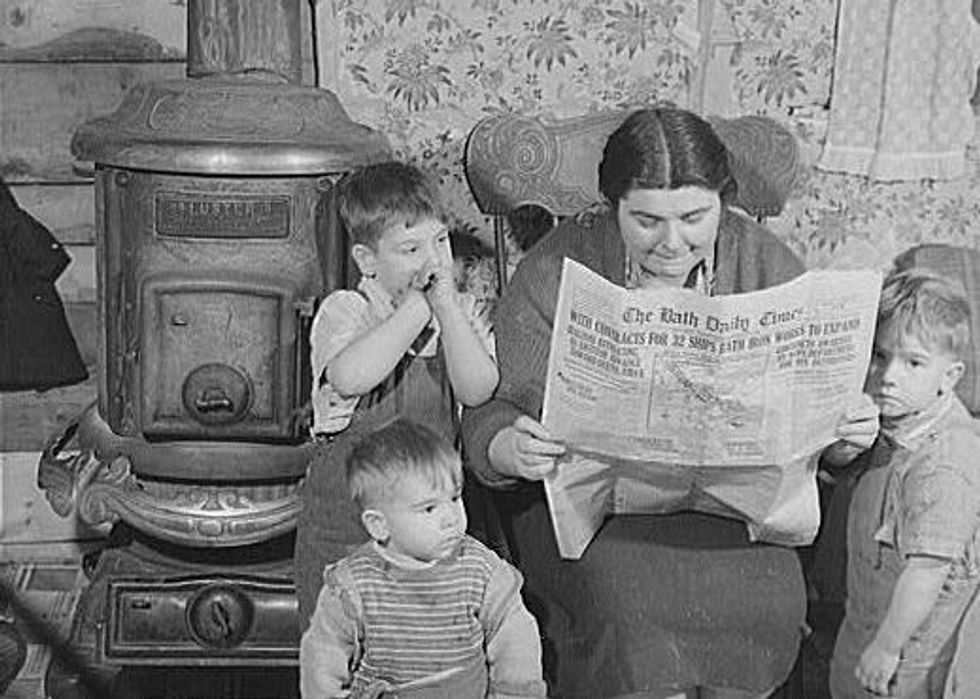 Sunday Bloody NYT Sunday is back, kids, and of course we have to start our perusal of the Newspaper of Record with its coverage ofevents overnight in Ferguson, Missouri. Not surprisingly, the midnight curfew declared by Gov. Jay Nixon yesterday didn't exactly bring peace and quiet -- demonstrations continued, the police fired tear gas, and seven demonstrators were arrested. Why the tear gas, after Capt. Ron Johnson had promised that it wouldn't be used? At a press conference, Johnson

explained that some tear gas had been used because the police had learned that armed men were inside a barbecue restaurant. One man with a gun had moved to the middle of the street, Captain Johnson said, but escaped. Another man, who was not identified, was shot by an unknown assailant and taken by companions to a hospital, where he was reported to be in critical condition. A police car was fired upon, the captain added, but it was not immediately clear if it was hit.

So there's your straight reporting; we also get a very good backgrounder by Tanzina Vega and John Eligon, on the history of racial migration and resulting power clashes in the suburbs surrounding St. Louis, where Ferguson is just one of

many of the suburbs around St. Louis, inner-ring towns that accommodated white flight decades ago but that are now largely black. And yet they retain a white power structure.

Although about two-thirds of Ferguson residents are black, its mayor and five of its six City Council members are white. Only three of the town’s 53 police officers are black.

It's historical context, and it's a good read. Check it out. A highlight: back in the '70s, a Ferguson City Councilman was quite the wit in his condemnation of troublemaking negroes: “We should call a black a black, and not be afraid to face up to these people,” he said, apparently auditioning for a place in rightwing talk radio that hadn't been invented yet.

You might want to skip the other supplemental analysis story on Ferguson, which has the terrific insight that the protests don't have a unified leadership, and the kids just don't listen to community leaders like they supposedly used to.

Outside of Ferguson, we've got a seriously squicky but fascinating investigative piece on -- and here's a phrase you might not have expected to ever read -- "Israel’s irrepressible underground kidney market." Turns out there's a thriving international black market in organs, much as that sounds like the premise for a cyberpunk movie, and "Israelis have played a disproportionate role" in the trade, partly due to a low rate of voluntary donations because of "religious strictures regarding death and desecration." Sleazy Israeli and Ukranian brokers arrange deals, for hundreds of thousands of dollars, to get kidneys for Israelis and Europeans, and the occasional American, outside the normal transplantation networks. And you will never guess who the donors are! People from developing countries like Sri Lanka, Turkey, and Costa Rica, who are usually "poor and ill-informed about the medical risks." Yet another side effect of an international wealth gap, although we're sure it wouldn't take much effort to find a libertarian explaining that this story isn't about exploitation, but is instead about how inventive and life-affirming the free market is, insuring a life-saving surgery and a nice payoff for the third-world donor, who might have gotten infected with something anyway.

Also worth a look, Alissa J. Rubin's first person account of surviving the crash of an overloaded helicopter that was rescuing Yazidi refugees from Mount Sinjar in Iraq. It's pretty gripping True Adventure Journalism stuff, once you get past that oh-so-NYT headline: "On a Helicopter, Going Down: Inside a Lethal Crash in Iraq." Rubin dictated the piece from her hospital bed, apparently unaware at the time that the dashing pilot about whom she'd had so many nice things to say, Iraqi Gen. Majid Ahmed Saadi, was the only person to die in the crash. His desire to help evacuate as many Yazidis as possible -- "The pilot was just so moved by all this. He wanted to help all these people, especially the children" -- led him to overload the helicopter, causing the crash. Unlike so much in the Times, there's nothing to make you cringe here, just good intentions (plus overconfidence in piloting skills) gone terribly wrong. Incidentally, when Jim Hoft carried the story that a NY Times reporter had been seriously injured in the crash, his commenters' reactions included "YES!" and "the NYT does all it can to stoke hatred of Israel. Now two of their reporters found themselves crashed, injured, in trouble surrounded by people who like to take people heads off. Schadenfreude." They seem nice.

Also, DreamWorks studios is bringing Lassie back, not as an action hero who rescues Timmy from the well, but as a marketing and promotional avatar. We bet that's as successful as last year's attempt to revive "The Lone Ranger" -- can Johnny Depp bark?

And now, since we aren't quite masochist enough (yet) to look at the stories about bargain $3.4 million apartments, we move on to the columnists. First, the good news: There's no Thomas Friedman this week. Taking up the Bland Slack is an unremarkable Frank Bruni column on Colorado as a battleground state where easy left-right distinctions aren't reliable, and then we fell asleep.

When we awoke, we found ourselves nodding -- this time in agreement, not stupefaction -- while we read op-ed contributor David L. Kirp's piece on the follies of market-based education reform, which is worth a read for the details even though the title lets you know what all the examples will bear out: "Teaching Is Not a Business." Surprise! Children aren't products, and you can't just Free Enterprise (or Google Glass) them into people who love learning.

Also good, or at least not terrible: Maureen Dowd gets through an entire column about the Justice Department's pressure on Washington Post reporter Jim Risen to reveal sources in a 2006 book without once mentioning Hillary Clinton -- even though the events Risen wrote about took place during the Clinton administration. Thank heavens she has Eric Holder to yell at this week.

Ross Douthat manages to surprise us with a column that we mostly agree with, decrying the militarization of policing as we saw in the performance of the St. Louis County PD's Keystone Stormtroopers last week. Heck, he even includes a shout-out to "Radley Balko’s essential 2013 book on the subject, The Rise of the Warrior Cop," which as it turns out is also on Yr Dok Zoom's reading list. There's nothing much to disagree with here:

Last week, The New Republic’s Alec MacGillis ran the numbers for Missouri and found that the state’s Department of Public Safety received about $69 million from the Department of Homeland Security in the past five years alone. Which helps explain why the streets of a St. Louis suburb flooded so quickly with cops in gas masks and camouflage, driving armored cars and brandishing rifles like an occupying army. It’s our antiterror policies made manifest, our tax dollars at work.

And it’s a path to potential disaster, for cops and citizens alike. The “S” in SWAT was there for a reason: Militarized tactics that are potentially useful in specialized circumstances — like firefights with suicidal terrorist groups — can be counterproductive when employed for crowd-control purposes by rank-and-file cops. (The only recent calm on Ferguson’s streets came after state cops started walking through the crowds in blue uniforms, behaving like police instead of storm troopers.)

We can (and do) take issue with Douthat's suggestion, a minor point in the column, that "our punitive system may be a big part of what’s keeping crime rates as low as they are now," but for a change we're solidly behind his conclusion, noting that for far too long, law enforcement had been equipped and training for scenarios that assume a massive response is called for,

as if every burst of opportunistic lawlessness could become another Watts, as though the Qaeda sleeper cells we feared after 9/11 were as pervasive in life as they are on “24” or “Homeland.”

And this is where it’s ended: with a bunch of tomfool police playing soldier, tear-gassing protesters, arresting journalists and turning Ferguson into a watchword for policing at its worst.

Time to take their toys away.