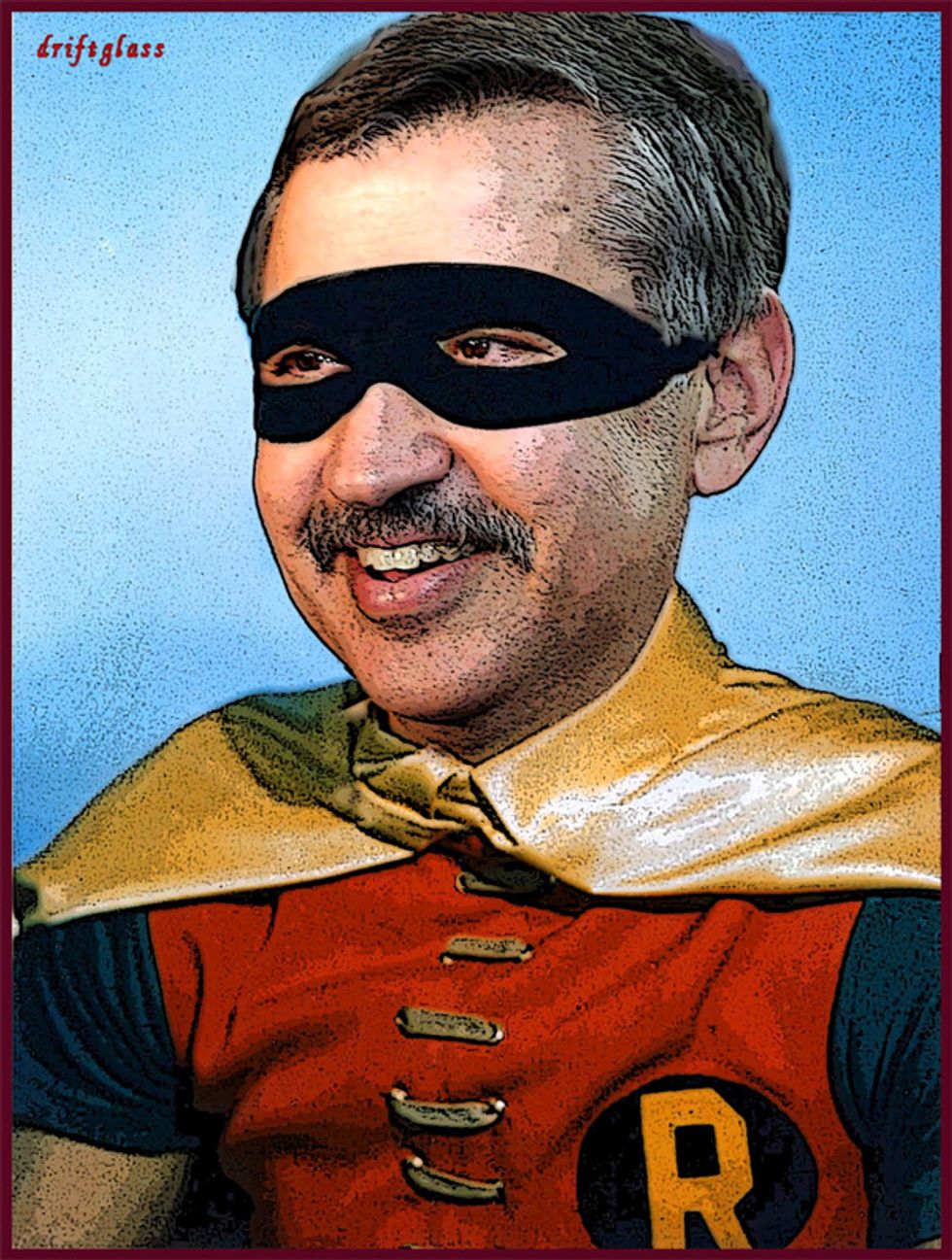 Most of the news today is predictably awful, so we will just skim it, thank you. Good god, you people aren't actually relying on Yr Wonkette to be informed, are you? It looks like the government of Hong Kong is trying to avoid going all Tienanmen Square on pro-democracy protesters, so that's a good thing. The federal government is trying to reach out to disaffected Muslim youth in America to prevent them from joining ISIS and other terrorist groups, a task which is made difficult by the fact that the government has done so much to treat American Muslims like pariahs (and American wingnuts keep calling for more). See the treatment of NPR's Sarah Abdurrahman during a routine crossing from Canada back into the US last year for an example of actions that may be even more likely than AP History to make people hate this government.

If you'd like a story that leaves you more impressed than disgusted with humanity, go read this sweet piece on Lori Sousa and Peter Maxmean, a couple of Rhode Island newlyweds who both have intellectual disabilities but, with help from government programs, are becoming increasingly able to live independently. Get ready for some inspiration and damp eyes. Nobody this nice should ever be accused of being "takers."

Also, we recommend this feature on the cultural collateral damage from the Ebola outbreak in Liberia, stemming from the horrible fact that simple human contact with a loved one can spread the disease. It's a sensitive and thoughtful portrait of the repercussions of an epidemic in a culture that "used to be a tactile place":

Everybody kissed friends, strangers and cousins, regardless of whether people met every day or had not seen one another in 20 years.

In a version of the genteel affectations that freed American slaves brought with them two centuries ago when they came here, the double-cheek kiss, for decades, was the standard greeting.

People often held hands while singing hymns at First United Methodist Church on Ashmun Street on Sundays, and after services sometimes took up to an hour to disperse, going systematically from cheek to cheek [...]

This one may make you cry, too. Just don't get any on us.

There's one very big obituary today, for Jean-Claude "Baby Doc' (No relation) Duvalier, the deposed dictator of Haiti, who died yesterday of a heart attack at the age of 63. But he was a monster, so screw him. And maybe read some Graham Greene. But definitely go read the obituary of a woman who we wish we had known more about while she was still alive -- a frequent reaction to NYT's obits of the less famous -- Jerrie Mock, the first woman to complete a solo flight around the world. Amelia Earhart disappeared trying it in 1937 (and she had a navigator); by the time Mock actually accomplished it in 1964, it was mostly a matter of replacing three of the four seats in her 11-year-old Cessna 180 with gas tanks and adding some additional radio equipment -- which didn't work right at first. And why did she do it?

That summer, Flying magazine asked Ms. Mock why she had undertaken such a treacherous journey alone.

“It was about time a woman did it,” she said.

As inveterate airplane nuts, we loved every word. Dip your wings for Jerrie Mock, a brave lady you probably never heard of.

On to Fashion-n-Style! Women entrepreneurs are making Colorado pot dispensaries less dreary! But they are young women, so of course they're profiled in Style, not in Business, which maybe is just as well because we never read the business section.

Please expand to Seattle with all due haste, as we discovered last weekend that there is one non-medical legal weed shoppe, and there's a seventy-hour wait or something to get in. Or so we heard. Useful buzzword (Ha! Ha!) from this article: "cannabusiness."

There's a profile of a dude who is a "professional line sitter" -- people pay him to stand in line for the release of new products like video games and tech toys, or maybe legal weed in Seattle. This is where we had to go listen to Eddie Murphy's I-don't-believe-this laugh from Beverly Hills Cop, yes.

Advice Guy is actually kind of boring this week, but for one question from someone who has moved in with a recently-divorced woman and her cat. The writer is quite specific that the cat is a big part of the relationship. But horrors! The partner and her ex agreed that the cat would live with partner but the ex could visit. Dilemma!

My partner thinks this is fine, but I don’t want the ex in our home. I say he divorced the cat when he divorced my partner. What do you think?

We think you should go read the stories about people dealing with Ebola or getting married despite having serious intellectual disabilities and thank your lucky stars that your biggest problem is cat visitation rights. That is what we think. Advice guy offers some less snippy advice, we don't even care what. Something about "reasonable compromise."

Columnists, now, and we will finish this grind! Frank Bruni is actually rather good for a change, possibly because he's not trying to fob off a book report as a column. Instead, he's taking American Catholic churches to task for their seeming witch hunts for gay teachers in Catholic schools, which he notes is a far more vigorous enforcement of Church doctrine than attempting to weed out perpetrators of other Catholic Sex Crimes (great band name):

The rules of this particular club prohibit divorce, yet the pews of many of the Catholic churches I’ve visited are populous with worshipers on their second and even third marriages. They walk merrily to the altar to receive communion, not a peep of protest from a soul around them. They participate fully in the rituals of the church, their membership in the club uncontested.

The rules prohibit artificial birth control, and yet most of the Catholic families I know have no more than three children, which is either a miracle of naturally capped fecundity or a sign that someone’s been at the pharmacy. I’m not aware of any church office that monitors such matters, poring over drugstore receipts. And I haven’t heard of any teachers fired or parishioners denied communion on the grounds of insufficiently brimming broods.

OK, Bruni, you're all right this week.

We also find ourselves Not Horrified by Ross Douthat this week, as he looks at why some cultural conservatives -- especially the ones named "Ross Douthat" -- actually like Lena Dunham's Girls. He is pleased that Dunham

often portrays young-liberal-urbanite life the way, well, many reactionaries see it: as a collision of narcissists educated mostly in self-love, a sexual landscape distinguished by serial humiliations — a realm at once manic and medicated, privileged and bereft of higher purpose.

We are still Netflixing Season One of The Walking Dead (shut up -- we're up to date on the comics!) and haven't seen this Lena Dunham naked show at all yet, so we will let Yr Editrix agree, or at least not disagree, from the Chatcave: Yes, she says, Dunham is "expressly setting her up characters as extremely flawed and selfish and not as paragons." Flawed characters? Imagine that!

Maureen Dowd is similarly un-awful this week -- dare we say she's actually got a pretty good point? Nah, because much of the best of her column takes its lead from a New Republic piece by Bryce Covert:

“Time and again,” Covert wrote, “women are put in charge only when there’s a mess, and if they can’t engineer a quick cleanup, they’re shoved out the door.”

She added: “As with [former Secret Service director Julia] Pierson, women are often put in these positions because rough patches make people think they need to shake things up and try something new — like putting a woman in charge. When it’s smooth sailing, on the other hand, men get to maintain control of the steering wheel. Women are also thought to have qualities associated with cleaning up messes.”

On the other hand, says Dowd -- and again, we can't really disagree -- Pierson screwed up all on her own, even if she was handed a crap job:

she earned her abrupt exit fair and square. It’s no blot on the copybook of women. She withheld crucial information and helped paper over fiascos at an agency where mismanagement and denial put the president’s life (and his family’s lives) in jeopardy.

Presidents are hesitant to ride herd on the agency because, as one White House insider noted, “these people know everything about him, his wife, his kids, his in-laws, all of his secrets. You feel a little vulnerable when people know things about you.”

Thankfully, after all this peace, love, and understanding for columnists who usually set our teeth on edge, our inner Sad Masochist is given a full helping of punishment by having to read Thomas Friedman's crudpile, which is somehow even more inane than most Tom Friedman columns. As the Monty Python review of Australian table wines said, it's perfect "for those keen on regurgitation; a fine column which really opens up the sluices at both ends."

For his sermon today, Rev. Friedman takes as his text a Batman movie, particularly one scene between Bruce Wayne and Alfred the Butler (played by that guy from the original Italian Job) from The Dark Knight Returns. Friedman acknowledges that idea for the column comes from Israeli analyst Orit Perlov, who explained the movie to him (and presumably directed him to IMDB so he could copy-paste the dialogue):

since I can’t visit the Islamic State, which is known as ISIS, and interview its leaders, the next best thing would be to see “Batman: The Dark Knight.” In particular, she drew my attention to this dialogue between Bruce Wayne and Alfred Pennyworth:

Nahh, we're not going to copy it here. It's the scene where Alfred explains to broody ol' Bruce that you can't understand some people's motivations, because

some men aren’t looking for anything logical, like money. They can’t be bought, bullied, reasoned, or negotiated with. Some men just want to watch the world burn.

Actually, now that we think about it, this isn't a bad column at all, since about half of it is a transcript of dialogue from a pretty good movie. Otherwise, that space would be taken up with Tom Friedman's prescriptions for bringing peace to the Middle East, which include these easily accomplished goals:

Where there is disorder — think Libya, Iraq, Syria, Mali, Chad, Somalia — collaborate with every source of local, regional and international order to contain the virus until the barbarism burns itself out. These groups can’t govern, so ultimately locals will seek alternatives.

Where there is top-down order — think Egypt or Saudi Arabia — try to make it more decent and inclusive.

Where there is order plus decency — think Jordan, Morocco, Kurdistan, the United Arab Emirates — try to make it more consensual and effective, again to make it more sustainable.

Also, we have to do all this while being "humble," because the most we can hope for is to "contain these organisms, until the natural antibodies from within emerge." Gosh, it's almost as if he has some other international crisis in mind. Still, since he's at least not just screaming "Kill it! Kill it with Fire!" Thomas Friedman gets to retain possession of his "Most Moderate Moderate" coffee mug for another week.