Sunday Bloody NYT Sunday: The Everything Is Really Sad, Even The Good Things, Edition 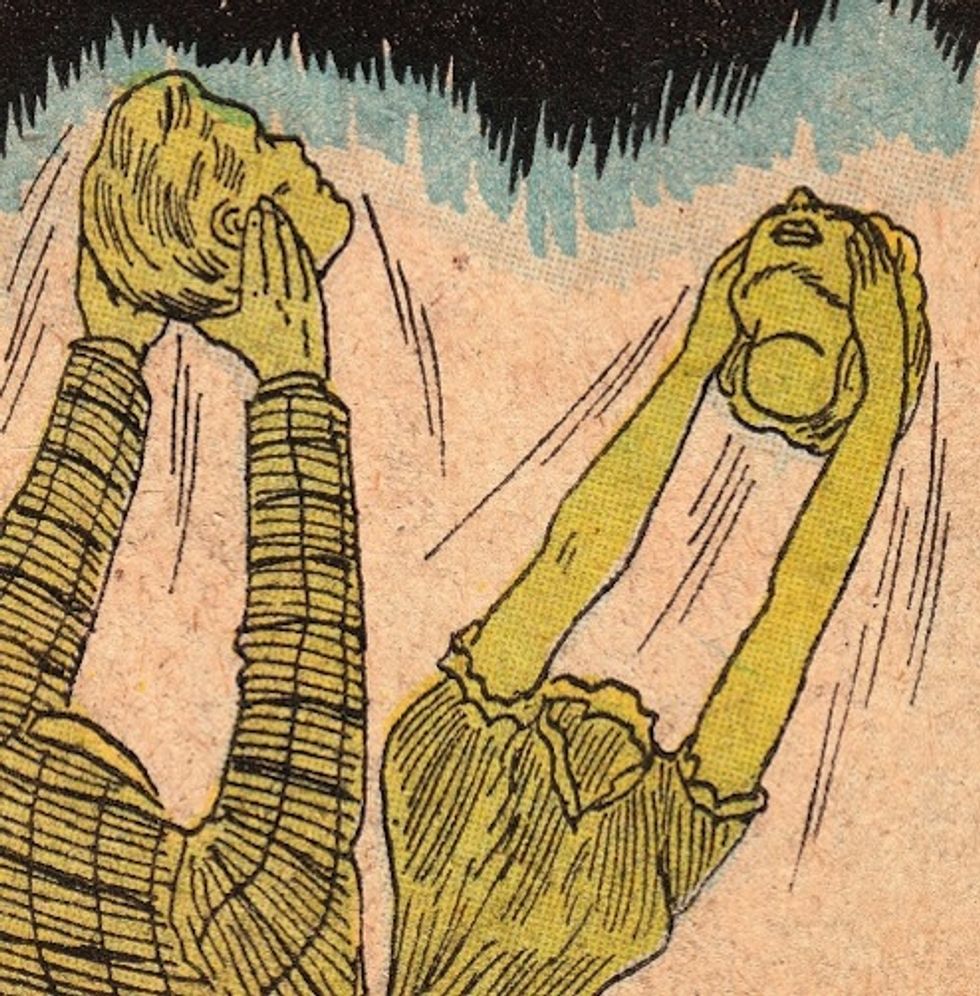 This week's New York Times is full of Syria, as the paper of record really should be at this point. Even some people we usually mock (looking at you, Frank Bruni) are turning in columns discussing the complexity and lack of good options in Syria. Perhaps the NYT has decided to adopt the official editorial policy of yr Wonkette regarding Syria, which is ?????????. So, before we roll up our sleeves and pant legs and other assorted articles of clothing and wade in on Syria, let's start Sunday off right with some NYTNiceTime, shall we?

Do you want to read about the awesomest old-timey gay couple in New York and hear about how they used to have sexytime on the subway and selling their place in Chelsea for a cool $4 million and how they still have sexytime and are pretty much the best old guys on the planet? You fucking better!

In the last apartment they are likely ever to live in together, Kenneth Leedom and Peter Cott were talking about eros and the public life of New York — which is to say, sex on a moving subway train. Mr. Leedom is 88; Mr. Cott is 89.

Mr. Cott, seated beside an upright piano in the couple’s sunny yellow living room, listened intently, then spoke as if delivering his lines from a stage.

“We all gravitated to the connection between the two trains,” he said, recalling a time from half a century ago. “And that was sexville.”

Yr Wonkette is pretty much wishing that both of these guys were our grandfathers right now. They still look dapper as fuck and they think that young people do not have enough sex. That being said, this is actually a bittersweet nice time, as they've now moved into housing for older people and one battles Alzheimer's while another struggles with cancer. The whole article is a moving meditation on love and loss and growing old together and if you don't tear up when you read it, we need never speak again.

There's nothing nice nor bittersweet - just stupid - in the Glenn Beck magazine interview, where he adopts his semi-human persona rather than his weeping drooling latex-glove-wearing one that we've come to know so well. Media Matters has already explained how pretty much every word of this thing is a lie, as if you didn't know that already.

We have literally no complaints whatsoever about this week's Sunday Styles because it is actually about fashion-y things rather than being a way to talk about powerful ladies and how they still like to do lady things like have lunch and dress nice. Way to go, Sunday Styles!

Before we plunge into the opinion pages, we'll just take a moment to note that Maureen Dowd has a column over in the Arts and Entertainment section where she gets to write about - and meet! - Daniel Craig and it is as weird as you think and it makes us so jealous we could spit because DANIEL CRAIG. We are bothered when she writes about his baby blue eyes because we do not want to think about MoDo thinking of anyone in that special way, but then we distract ourselves by thinking of those baby blue eyes and editing out MoDo entirely.

It is uncomfortable to watch the president struggle to reconcile his two conflicting identities as he weighs what he calls the unappetizing choices on Syria, and as he is weighed down by the malignant choices on the Middle East made by his predecessor.

In his head, is Barry at war with the commander in chief?

We've read this column like five times now to try to figure out what the two sides of Barry Bamz are, according to MoDo. We think maybe one side was when he was senator and wasn't digging on war but now he does? Or maybe back when he was law review editor at Harvard and had feels that are not the same as he has when commanding a whole country? Whatevs. Let's go see what Tom Friedman thinks, because we apparently are gluttons for punishment. Friedman would like us to know that the world is flat and there is nothing new under the sun and probably one million other timeworn cliches that he keeps in his back pocket:

I keep reading about how Iraq was the bad war and Libya was the good war and Afghanistan was the necessary war and Bosnia was the moral war and Syria is now another necessary war. Guess what! They are all the same war.

Yes, let's boil down human tragedy to a bit of smug ennui for Thomas Friedman! Stupid world, with its complex patchwork of conflict. You should know you can't stand in the way of the Mighty Friedman. And please, do make sure to say pompous things like this about other countries:

And, as I’ve said before, they are all the story of how difficult it is to go from Saddam to Jefferson — from vertical rule to horizontal rule — without falling into Hobbes or Khomeini.

Maybe all those war-torn countries need is a McDonalds, right? Weirdly, Friedman actually manages to name-check more 17th century philosophers than our buddy Ross Douthat this time around. Ross would like to share with us about how this whole mess is Bamz' fault because he is too weak, or too strong, or too something that is different than what imaginary president Ross Douthat would do in this situation.

Yet if this intervention is actually about making Syria safe for democracy, the strike being contemplated is wildly insufficient to that end. So either the White House is secretly planning for a longer war or else it has no clear plan at all. And either possibility would be a plausible reason for a conscientious Congress to vote against this war.[...]

But it’s important to recognize just how unprecedented such a vote would be, and how far the ripples might ultimately spread. It wouldn’t just be a normal political rebuke of President Obama. It would be a remarkable institutional rebuke of his presidency, with unknowable consequences for the credibility of American foreign policy, not only in Syria but around the world.

So it is cool if Congress votes against intervening, but if they do it is bad because no one will ever believe in America again. Do we have that right? That is less than helpful, Ross Douthat.

Honestly, the only opinion columnist that didn't make us want to pitch the computer across the room today is Frank Bruni, who has written a thing of beauty about how everyone should just shut the fuck up already about Syria if they don't know things:

Last week, in many places, I read what Sarah Palin was saying about Syria, because of course her geopolitical chops are so thoroughly established. A few months back, I read about Donald Trump’s thoughts on possible military intervention, because any debate over strategy in the Middle East naturally calls for his counsel.

What he said, seriously. Bruni doesn't just hulk-smash people like Palin for weighing in. He also reminds us, unlike the Friedman/Dowd/Douthat crew, that this whole thing is actually awful for actual people:

You know whom it’s an even more defining moment for? The Syrians whose country is unraveling beyond all hope; the Israelis, Lebanese and Jordanians next door; the American servicemen and servicewomen whose futures could be forever altered or even snuffed out by the course that the lawmakers and the president chart.

We aren't even gonna snark on that, people, because there's nothing snarky to say. These are all depressingly bad and terrible things happening, and we're probably as credible a source as your mom on Syria, so let's all get on with our day and go get mad at the Times Book Review instead, shall we?