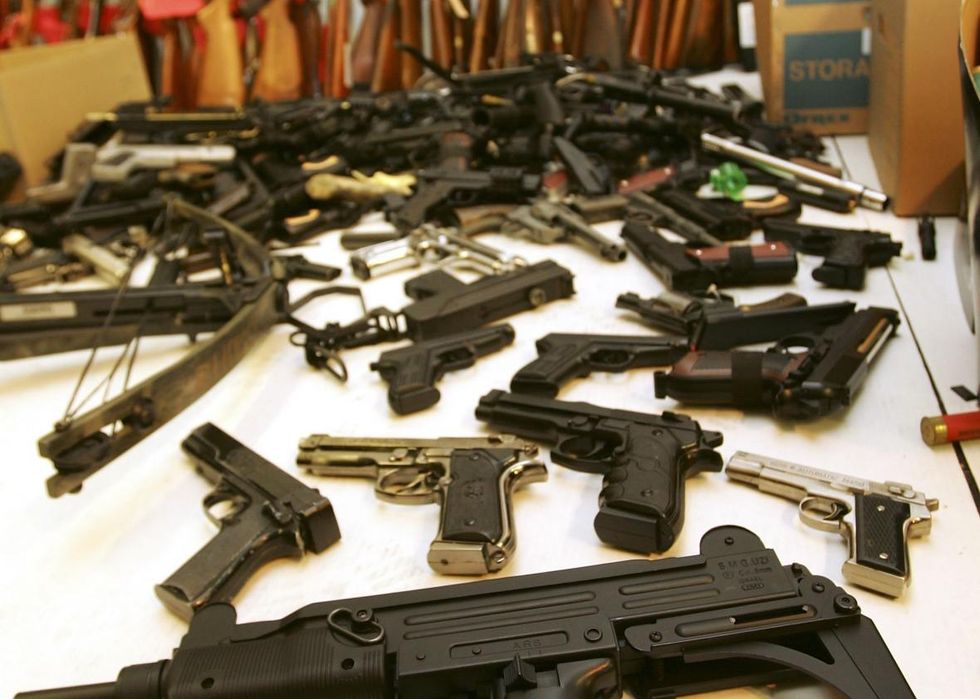 Hello, Wonks! Welcome to this week’s rundown of the most idiotic or stupid things said in the political Sunday shows. It seems every time we do one of these, no matter the week, an emerging theme dominates. This week it seems we have finally and inevitably landed on GUNS. This will admittedly be harder to mock than selective outrage at a comedian’s jokes or Rudy Giuliani having a meltdown or disrespecting a dying veteran and senator, but here we go!

His felony convictions were tossed, so yes, he can own guns.

Appearing on Fox News Sunday, North knew exactly what the problem is that is causing all these school shootings like the tragic one in Santa Fe High School in Texas (hint: NOT guns).

North: The problem that we got is we are trying like the dickens to treat the symptom without treating the disease.

And the disease in this case isn't the Second Amendment. The disease is youngsters who are steeped in a culture of violence. They have been drugged in many cases. Nearly all of these perpetrators are male and they are young teenagers in most cases.

And they have come through a culture where violence is commonplace. All you need to do is turn on the TV, go to a movie.

So, the problem is not the overabundance guns in this country but violent video games, tv and movies? So how do you explain that the rest of the world plays the same games and watches the same media, but we are the ones with the most gun violence for a developed country? It doesn’t but North knows this. This is about finding a different scapegoat.

Let’s ignore the general stupidity of his premise and look at the charts and see what is influencing, according to North, all this violence. The top 10 selling video games prior to the shootings include a Viking and his son (#1 God of War), Donkey Kong, Mario Kart 8 and Lego Marvel Superheroes 2. See anyone assaulting people with battle axes or go karts? The top 10 movies prior to the shootings include Marvel’s Infinity War, a remake of Overboard (leave Kurt Russell classics alone!), Amy Schumer’s I Feel Pretty and Black Panther. Seen any vibranium weapons, purple aliens or Anna Faris attacking anyone? The top ten shows include The Big Bang Theory, Young Sheldon and American Idol. Have they killed anything other than good taste lately?

The answer is of course not. But then again, Oliver North only has objections to violent video games unless they are paying him to consult and provide voice work as Himself.

Let’s move on next to Lt. Governor and door opponent Dan Patrick. Appearing on ABC’s This Week, he had his own theory of why gun shootings occur:

PATRICK: George, should we be surprised in this nation? We have devalued life, whether it's through abortion, whether it's the breakup of families, through violent movies, and particularly violent video games which now outsell movies and music.

PATRICK: Well, George, I think I laid out just a moment ago the problem is multifaceted. It's not any one issue. But we, again, we have to look at our culture of violence, just our violent society, our Facebook, our Twitter, the bullying of adults on adults and children on children.

Oh, now its bullying on Facebook and Twitter. Good thing First Lady Melania Trump is right on top of that issue with her “Be Best” program! Exemplified by her husband:

Senator Cryin’ Chuck Schumer fought hard against the Bad Iran Deal, even going at it with President Obama, & then Voted AGAINST it! Now he says I should not have terminated the deal - but he doesn’t really believe that! Same with Comey. Thought he was terrible until I fired him!

George Stephanopoulos pushed back with some simple statistics:

STEPHANOPOULOS: Americans of high school age are 82 times more likely to die of gun homicide than their peers in the rest of the developed world. That has to be connected to the availability of guns, doesn’t it?

PATRICK: No, it doesn’t have to be, George and I can’t compare one country with another country because there are many variables in all these countries. Here’s what I know. We live in a violent country where we’ve devalued life.

I’ll agree with Dan Patrick on one thing: America has devalued life, but only because the fetishistic love for guns trumps the lives of children. Videos like this one:

If only Dan Patrick was as passionate about protecting school kids from gun violence as he was about "winning" against trans bathroom rights. It seems you can't pass commonsense gun regulations without risking losing 5 billion dollars like he wanted in the clip below (featuring a special appearance from an NRA Dementor):

We conclude this week with CNN political commentator and Curly Howard look-alike David Urban on CNN State of The Union. As part of the discussion panel, he tried his best to steer the conversation away from the guns:

URBAN: So, Governor, you heard Jake just asked Senator Warner the question about -- during the '80s when Democrats ran the White House, both Houses of Congress, you could have acted, you could have done all of this.

Yes…if only we had passed a bill against assault weapons. Maybe something like a federal assault weapons ban. Like around September 13, 1994, after 5 years of debate? And if we passed it, maybe not let it sunset in 2004 which correlated with a spike in assault weapon deaths? (if only, David Urban, if only…)

But when that fails, David Urban adds a pinch of racist dog whistle to his argument:

URBAN: -- Chicago 1,400 kids, people, killed in the streets of Chicago in the past two years. That is an epidemic. That should be addressed.

Ahh, yes, the good old “Chicago has tough gun laws but the most gun violence (and dark skin people)” argument. Thankfully Representative Robin Kelly and former governor Jennifer Granholm were quick to knock this nonsense down:

GRANHOLM: They're getting guns from Indiana. They're coming across the border.

That’s right! The ever-convenient forgotten part of Republican argument about guns and Chicago: The “Iron Pipeline” from neighboring states like Indiana and Wisconsin. Because Republicans can think of health insurers and immigrants crossing state lines with ease but are confused about how this happens with guns. I mean, it’s not like the former governor from the state where most of the illegal guns in Chicago come from is our Vice President or anything…

So that wraps up another weekly round-up of the Sunday shows. I really hope we can take this classic bit of wisdom from Trevor Noah.

So until next week, I'll be figuring out if, on this issue, Magneto was right after all. Of course, it wouldn't be the first time for Sir Ian McKellan.

Wonkette is ad-free and supported ONLY by donations from YOU! Go grab your credit card, we'll wait and we love you.