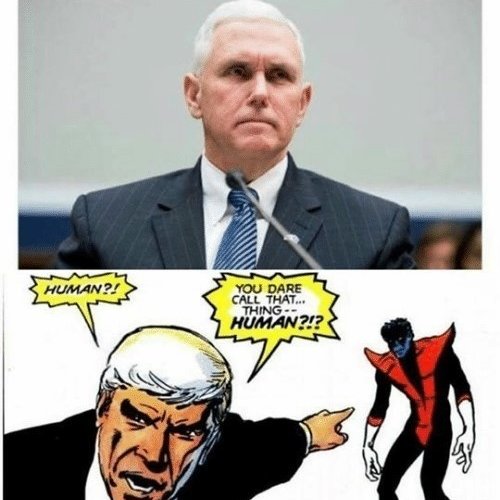 In one appearance out of many this weekend to push for current Supreme Court nominee Brett Kavanaugh, Pence bitched to Chris Wallace on 'Fox News Sunday' about President Obama returning this week:

WALLACE: Let's start with Barack Obama's return to the campaign trail, accusing President Trump of practicing the politics of fear and resentment. Your reaction?

PENCE: Well, it was very disappointing to see President Obama break with the tradition of former presidents and become so political and roll out the same tired arguments that he and liberals have made over the last eight years. The truth is the American people in 2016 rejected the policy and direction of Barack Obama when they elected President Donald Trump. Look, we inherited an economy that has grown a little bit more than 1 percent.

In just 75 words, Pence has sent us in about four different factchecking directions, and it's tough! It's very rich Pence "lamenting the break of traditions" considering he's cast six tie-breaking votes during his first year in office, the most for any vice president, along with the first ever use of a tie-breaking vote to confirm a Cabinet member for Betsy DeVos. Then there are the numerous traditions, norms or rules his boss has broken during his time as president.

Nor was President Obama running in 2016. No matter how much Trump wishes it were so, he did not beat President Obama. In fact, had he been able to run, I have zero doubt he would have beaten Trump and Pence in a huge landslide. And as far as the economy, it was brought to us by President Obama's amazing economic interventions early in his presidency. This is now one of the longest periods of uninterrupted economic growth in American history, with 95 straight months of job creation. Since Trump's inauguration, the economy has created 3.58 million new jobs, which is still shy of the 3.96 million created in the last 19 months of President Obama's 2nd term.

But it's okay, Mike Pence. I'm sure this is not the first or last time you and Trump will fail to compensate for President Obama.

Speaking of Lodestar, next we have counselor to Trump Kellyanne Conway on CNN's "State of The Union with Jake Tapper."


And wearing white AFTER Labor Day!!!

After a week filled with SCOTUS confirmation hearings and a new book by Bob Woodward telling us what we already knew, the final straw for the Trump universe was the New York Times's anonymous Op-Ed by a "senior administration official." While the White House and the rest of the country has been trying to solve the mystery of the anonymous writer (It was Pence, in the library with a candlestick!), Conway tried her best to deflect it as not credible:

CONWAY: Then why are we giving this person authority? This person obviously is motivated by conceit and deceit.

TAPPER: ... until Vice President Pence was out there saying it wasn't him. He and the administration gave this op-ed credibility.

Seems like Conway and the White House are unaware of how the Streisand Effect works.

If this isn't a metaphor for his entire political career, I don't know what is.

Appearing on ABC's "This Week with George Stephanopolous," he made this false equivalency about President Obama:

CHRISTIE: But let me say one other thing about President Obama's speech: I find it richly ironic that he talks about the fact Trump is a symptom not the cause. OK, so what was happening, he was the president for the eight years when the cause was being created that he's now become a symptom of. But the president acts like he's detached from this, that somehow he was a dispassionate observer during the eight years beforehand. If Donald Trump is truly -- if he's right and Donald Trump is the symptom of a cause, well, Donald Trump got elected in 2016 after eight years of Barack Obama's president. He can't detach his self interest from that.

STEPHANIE CUTTER: You're absolutely right. Here are the other symptoms and some of the causes that the day he was elected president, after unifying the country with the largest coalition that we've seen coming together to elect for a president, Republicans had a meeting in Washington to say the one thing we need to do is make sure we have to subvert everything he does, vote against everything, stop him in his tracks and make sure he is a one-term president. And they tried to do that every step of the way -- stimulus, health care, clean energy, you name it. Everything. Tried to block him. And as they did that, they rallied a base and played to their worst sentiments.

CHRISTIE: In very much, Stephanie, the same way that the Democrats called George W. Bush an illegitimate president from the moment the Supreme Court -- wait a second.

CHRISTIE: I let you talk. (CROSSTALK) But I'm sorry, Democrats worked from 2000, from the day of the Supreme Court decision forward, to say that George W. Bush was an illegitimate president, recounting the votes...

Christie doesn't seem to grasp the irony or the difference between a Bush getting elected after the SCOTUS intervened in a state election recount to hand a victory over to him and a duly elected president that won in a landslide getting hampered from day 0 by a Congress and propaganda channel dedicated to demonizing and stoking hate for eight solid years. Considering how much flak he received for embracing President Obama after Hurricane Sandy or the amount of later-squandered support George W Bush had after 9/11, you would think he'd understand that.

That is all for this week! Don't forget to call your Senator to let them know how much Kavanaugh sucks. You're on the Internet, google the number.

Do it for America!!! Counting on it!

Wonkette is ad-free and supported ONLY by YOU! Support us!