Sunday With Jamie Kilstein And The Lord: God Is Dead, Scott Walker Lives 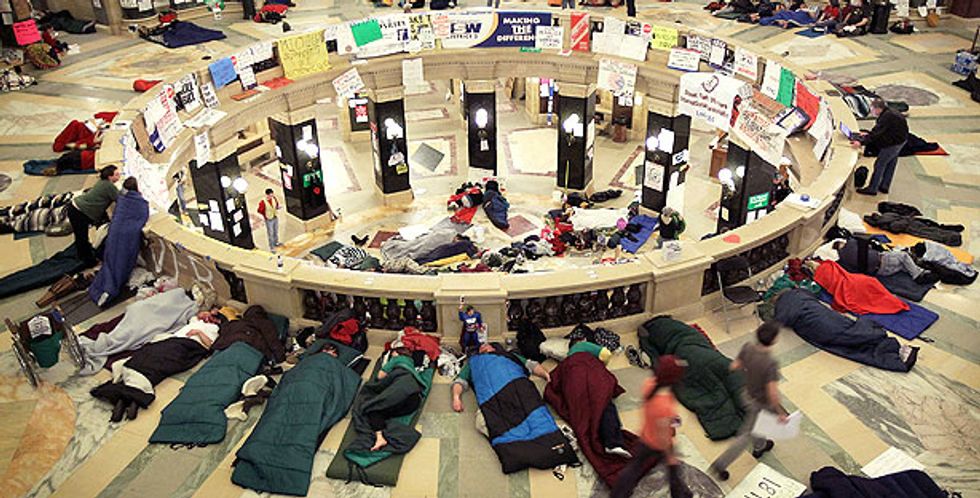 Scott Walker kept his seat and Ray Bradbury died last week, proving once and for all the world is a horrible place, and that if there is a God, he’s dead.

Scott Walker is the Hosni Mubarak of Wisconsin. Granted, Mubarak was appointed after his predecessor was gunned down, and Walker was voted in, but I like to pretend the good people of Wisconsin would never have done such a thing. Someone must have been shot, right? Right!

So Scott Walker comes into town as this sort of vacant idiot, and like all bullies do, realizes he needs to take a manly stance of some sort. In prison, to prove you are tough, you are supposed to find the biggest guy on day one and knock him out. To prove you are a tough guy as a Republican, you need to find the smallest or most isolated minority group and punch them in their tiny oppressed faces. Since hitting a child was out of the picture, he decided to crack down on unions, which most people didn’t even think exist anymore. Way to hold truth to power, asshole.

Walker wants to get rid of union’s right to collectively bargain, which is like trying to get a Republican to stop splooging all over old cowboy pictures of Ronald Reagan … it’s just what they do. Don’t ask them to stop. It gets weird. Walker wanted to take all negotiation rights away from the people of his state so if a rich cartoon-like villain of a CEO wanted to lay off half his workforce, cut pensions, or whatever, no one could fight back.

Except, Wisconsin fought back.

Wisconsin said fuck you and Wisconsin occupied. They occupied the state capitol and since anything with music in the background looks cooler and makes me cry-- it looked like this.

Those people lost last week when the dickwad they were protesting won the election by a vote margin of $30 million to $3 million. Because that’s how America works now. It’s not about the will of the people, it’s about how much money you can raise from Richey McOilPants, who doesn’t even live in state.

So now Wisconsin’s man boy of a dictator will try to fuck over those dancing teachers, those young kids riddled in debt, and yes those fire fighters (SERIOUSLY DID YOU FUCKING SEE WHEN THEY CAME IN AND THERE WAS THE CLOSE UP OF THE FIRE HAT BEFORE THE CHORUS!!!!?? AHGHGJH!!!!!11111)

When you turn on the news, you won’t see those faces, you won’t hear from workers, you will see boring ass, straight-laced white nerds in suits talking about how this is going to affect the election, some shit about numbers, strategies, and how Scott Walker is a real straight shooter.

But they forget that those dancing people started a movement, they occupied before occupying was cool. They didn’t get a permit to march, and they didn’t leave. They weren’t a bunch of dirty hippies; they were a bunch of regular people who were really fucking mad. And they forced a spoiled little shit to face a recall. He won. But he won because of money, because of voter suppression tactics, and because his opponent sucked as well. Barrett just stared off into space, refusing to defend the principles which got him there in the first place. Just collecting my check, ma’am, cause I’m a Democrat.

Revolutions don’t happen overnight. Mubarak sucked for a long time before the revolution happened. Put these fuckers on notice. Don’t give up when it gets hard. Get louder. Get angrier. When Ray Bradbury was 90 he said “I think our country is in need of a revolution.” He also said we should get rid of cell phones, but c’mon, the dude was fucking old. Let’s honor at least half of his dying wish and start by going back and watching that video again.

Jamie Kilstein is a skinny vegan standup comedian. He is on Twitter. He has a podcast with Allison Kilkenny. Someday, he will fight Jonah Goldberg.