Sundays With The Christianists: A Biology Textbook With Dinosaurs On Noah's Ark 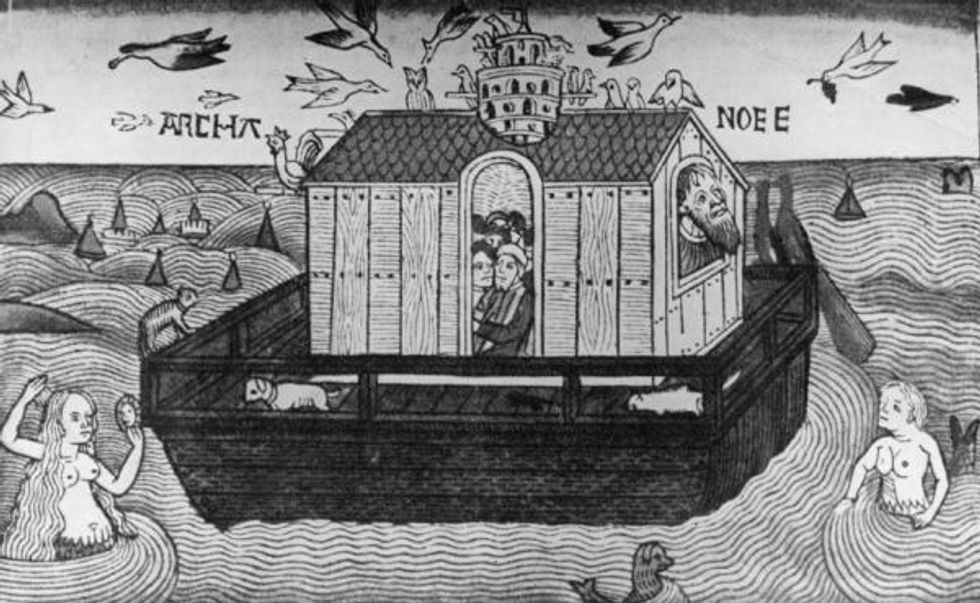 Greetings, heathen scum! Are you ready for more Bible Science? Get your rubber gloves on, because we're continuing our dissection of a textbook from Bob Jones University Press,Biology For Christian Schools, by William S. Pinkston. Last week, we learned about the very scientific theory of the "canopy" of water that floated above the atmosphere, just waiting for God to drop it on the Earth so He could kill every living thing that wasn't on Noah's Ark. In this week's installment, it's time for the Flood itself, which totally happened and was real, as proven by scientific facts in the Book of Genesis.

Pinkston starts this section with a little bit of actual science about what fossils are (again, he accepts that they represent real plants and animals, because there is no scientific evidence in the Bible to suggest that Satan buried them to fool us), but quickly mixes in a big dose of creationist tommyrot, like the assertion that the conditions that cause fossilization no longer occur today (He's lying, of course). He notes that "Experiments have shown that under proper conditions plant material can form coal in 20 min." which of course means that all the Earth's coal is simply the residue of forests and swamps that were covered by sediment during the single year of the Flood. And so on. All of this leads to the obvious conclusion that, rather than representing hundreds of millions of years of evolution, the fossil record is really evidence of all life on earth being wiped out by a single catastrophe a few thousand years ago:

The deluge fossil formation theory is held by many Christian scholars. Until about a century ago most written material -- Christian and non-Christian -- indicated that the fossils were formed by the deluge. In the 1800s, however, evolutionists began to suggest that the fossils were a progressive record of past times and had taken many thousands, millions, and even billions of years to form. The concept of fossils being formed by various methods over long periods of time was an attempt to support evolutionary theory. Today, however, some research and experimentation is producing support for the deluge fossil formation theory.

Those damn liberals and their progressive records! But first, we need to get rid of silly notions that the Flood story is a folkloric record of a localized event, because there's no way that could be true -- such an interpretation "contradicts Scripture," and so Pinkston includes a sidebar with proof of why the Flood was universal:

1. The purpose of the deluge was to destroy all flesh except that which was in the ark (Genesis 6:13, 17; 7:4, 19-23). This could not have been done if the Flood had been local, since people as well as animals could have migrated outside the area of a local flood.

2. The waters covered the highest mountains to a depth of over 2O ft. (Genesis 7:19, 20; 8:5). Since water seeks its own level, to cover a mountain by this depth requires a universal flood.

3. The duration of the Flood was over a year. Local floods do not last that long.

4. An ark to preserve Noah, his family, and the animals was unnecessary if the Flood were local.

5. God made a covenant with Noah that there would never again be such a flood. The rainbow symbolizes His promise (Genesis 8:21; 9:11, 15). The covenant has been repeatedly broken if it referred to local flooding.

Also, the idea that fossils and rock layers were formed over hundreds of millions of years is completely contradicted by a few examples of human artifacts found in rock formations that were supposedly ancient, like a 10-inch long gold chain found in a lump of coal, or a perfect sixpenny nail found in quartz. Of course, the textbook sort of leaves out the minor details that these artifacts do not actually exist today, and that the only evidence they ever did comes from 19th-century newspaper accounts. Even Creation Ministries International includes the gold chain story on its list of "arguments creationists should not use" -- it's right there with the canopy of water above the atmosphere. Besides, as any fool knows, these "out of place artifacts" are actually evidence of ancient astronauts.

The textbook has only a short section attempting to explain how the Ark itself was possible, because if you want the facts, they're right there in the Bible. But because some crazy fringe groups like the National Center for Science Education keep claiming that the story is somehow impossible, Pinkston reassures students that the Ark was completely plausible.

For one thing, Noah didn't have to take two animals of every species, just two of every "kind," and then after the Flood, there was plenty of breeding stock to repopulate the Earth. Really fast. And the Ark only had to carry land animals, since aquatic creatures were fine in the universal sea. (No, the book does not need to explain how freshwater fish survived, since obviously they did, duh.)

And about those dinosaurs: Pinkston figures there were a couple of ways that could have worked:

God possibly brought dinosaurs (perhaps young ones) to the ark. There was easily enough room for them.

It is also possible that God, knowing that the after-the-Flood world would not be suitable for large dinosaurs, did not bring them and other now-extinct animals to the ark. Some Christians object to this idea, saying that Noah was to take tow "of every living thing of all flesh" (Gen. 6:19) and dinosaurs must have been included. But the next phrase of the verse states "two of every sort." It is possible that the "sort" that included dinosaurs was represented by smaller reptiles, possibly some that we are familiar with today.

Science is FASCINATING! Pinkston says that ultimately, it doesn't matter, since lots of other stuff has gone extinct since the Flood, and God was OK with that, so no big whoop: "God could have destroyed creatures outside the ark in the Flood as easily as He could have destroyed them after the Flood." Sort of makes you wonder why He bothered with a Flood at all in that case, since presumably He could have wished everything but Noah and the favored species into the coalfield and been done with it.

Finally, Pinkston invokes Science Facts to explain away the problem of predators sharing cramped quarters with prey, or of Noah and his family keeping all those animals alive for a year and not drowning in poop:

A possible answer is that many of the animals entered into a state of dormancy (hibernation or other quiet states) for the year on the ark...some people object, saying that this would require a miracle from God. But the Flood, the ark, and the animals coming to and entering the ark were all miracles. God finishes the work that He begins. It is not likely that God would have permitted His creatures to harm one another or be overly demanding on Noah and his family.

Once more, we can only marvel at what an awesome thing Science is. We hope Pinkston will also explain how sheep's bladders may be employed to prevent earthquakes.

Next week, Sundays with the Christianists will be pre-empted by the Wonkette Book Club! Join Doktor Zoom to discuss this month’s selection, Rachel Maddow’s Drift: The Unmooring of American Military Power. You still have time to get and read the Kindle e-book ($11.99). Purchase it with those linkies, there, so Yr Wonket gets a cut!