Sundays With The Christianists: A Mutilated Squirrel Teaches Your Kids Why Welfare Is Bad 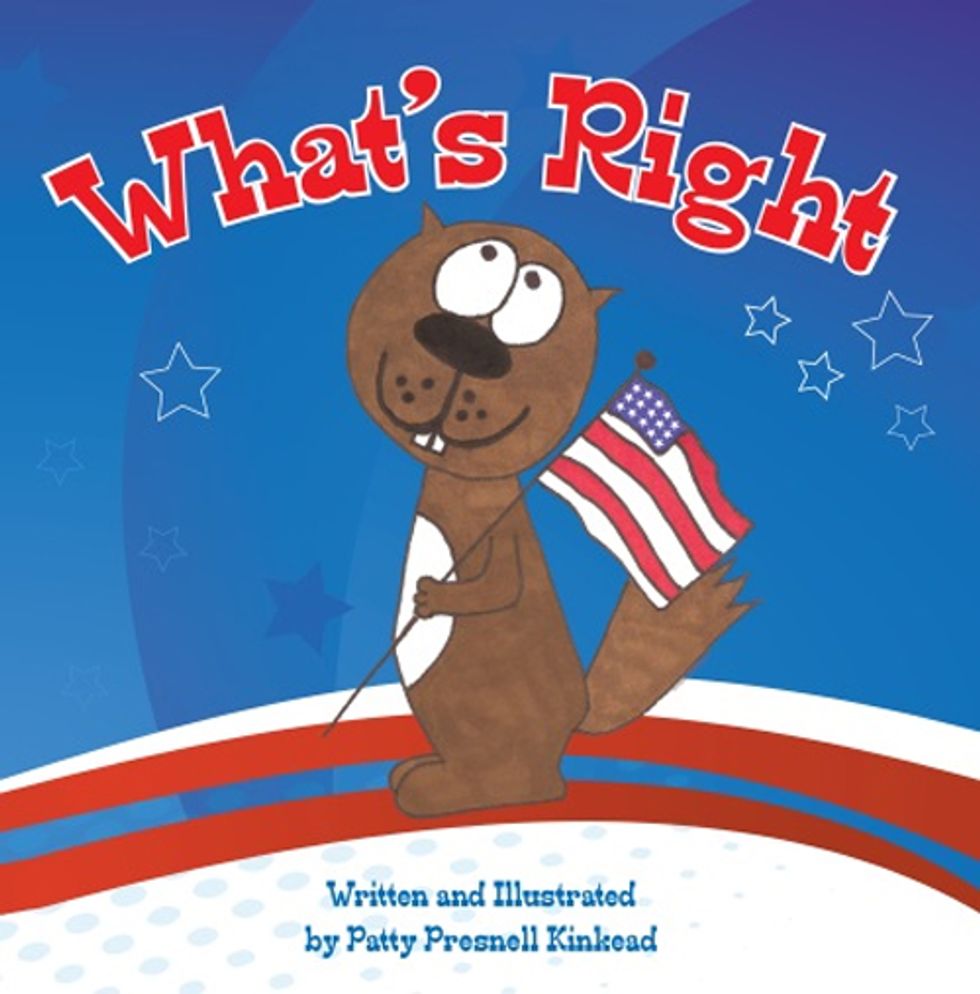 You can see why someone might think that's a beaver

Good Sunday to you, Sinners! As we promised, or threatened, earlier in the week when we wrote about the Tennessee homeschooling mom who is Very Concerned about all the Islamic Indoctrination that she's sure is happening in the school her son doesn't attend, we're going to review the heck out of the vanity-press children's book written by that very homeschooling mom, Patty Presnell Kinkead. It's called What's Right, and features the Traditional Values odyssey of Stumpy the Squirrel. Yes, squirrel -- not beaver, which is what we get for relying on RawStory's description of the book. Wonkette regrets the error, especially because "beaver" jokes are a lot funnier. As it happens, there is a beaver in the story, but she's one of the bad guys. So it goes.

Let's begin with this important note to the reader from Kinkead, which lets you know why she felt compelled to write a story for children:

So you know that this book will not only convey an important message about conservative values and working hard, but it will also be "fun." Yes, that is the signal for Mommy or Daddy to start drinking. But enough preliminaries! Let's get to the story!

We learn that Stumpy was a very good squirrel, and we see that Stumpy has a beautiful, fluffy tail. What makes him a "good squirrel"? His commitment to the Protestant Work Ethic, obviously:

Poor squirrels -- bereft of speech balloons, they must write out their messages on little signs. But they like it, because it's more work!

Oh, but tragedy lurks in poor Stumpy's future! One day, as he was running across the road, "a mail truck ran over his tail." Lousy unionized government employees and their careless driving! Stumpy's tail, once lush and fluffy, is bisected, with only a ragged stump left behind. Fortunately, his mother had the foresight to name him in a way that would describe his later disability. Was she psychic, or was he driven to self-mutilation by Destiny? This thorny question is never addressed, alas. Still, it could have been much worse.

Following his accident, Stumpy's tail is so sore that he is unable to gather any nuts, but his brothers happily share their food with Stumpy.

So now you can talk? Or are you too lazy to make a sign?

Their concern for him seems limited, however, as neither of them points out that they're all tempting fate by standing on twigs that are clearly incapable of bearing their weight, and Stumpy is on the weakest twig of all.

Oh, but Stumpy quickly grows accustomed to this life of easy living, and even after his truncated tail heals, Stumpy keeps trying to get a taste of his brothers' nuts (see, if he'd been a beaver, we wouldn't have to stoop to that). They complain to their mom, and she sends him to the "Animal Support Group" meeting, telling him, "You need to learn what's right." So off Stumpy goes to the meeting, which is led by a Leftist owl counselor who wears a bow tie and glasses. On the wall of the community center is a bulletin board that suggests exactly what a den of sin Stumpy has wandered into:

This is what you call "foreshadowing"

Food Stamps? Eat Free? Amnesty? Oh, Stumpy, beware! The counselor asks Gilda Goose to tell her story, and she explains that she has stopped flying south for the winter anymore, because it's "just too much work." Instead, she lives at the park and lives off the bread that people throw to her. And every year, she has a new clutch of goslings so that people will throw her more bread. She laments that lately, fewer people have been coming to the park, "and all my children are hungry." Counselor Owl empathetically says "Poor You," as he holds up a sign saying "Those meanies should throw bread." Stumpy, aghast at the cycle of dependency, says to himself, "That's not right! Gilda Goose should have planned better. It's not right that her babies are hungry."

This is where the attentive homeschooling parent might take the opportunity to explain The Message a little bit further, because it might be too subtle, don't you think?

Following the unbreakable narrative Rule of Three, we hear tales of woe from Albert Gator, whose father was abusive, but who now abuses his own baby gators (Couselor Owl's reaction sign reads "It's not your fault! You're a victim!) and from Bethany Beaver, who dropped out of "gnawing school" because it was too much work, never learned how to chew down trees, and is jealous of her successful neighbor who finished gnawing school and has a nice big comfy dam. This story really gnaws at Stumpy's outraged moral sense:

"It's not right that Bethany Beaver is angry she doesn't have a larger dam. Baxter worked hard to learn how to gnaw down really big trees. He has earned his bigger dam."

When Counselor Owl tells Stumpy that it's his turn to share, Stumpy instead realizes that he doesn't belong with this bunch of lazy whiners, so he turns half-tail and runs home to get back to work collecting nuts. After a hard day of work -- no doubt made much harder by once again standing way out at the farthest tip of the tree branches -- Stumpy's mom praises him for gathering more nuts than anyone else, and asks if he learned his lesson from the meeting. Did he ever! As he recites what he learned, we see Stumpy sharing his lessons with the other animals:

"Yes," said Stumpy. I learned it's not right to take your brothers' food when you don't work." [Stumpy thanks his brothers and pays them back with nuts he's harvested, so he won't owe them a Wookiee Life Debt]

"It's not right to have babies and not take care of them." [Stumpy shows the goslings a map and explains they need to fly south to find food, although we should point out that global warming will soon resolve this dilemma for them]

"It's not right to blame your daddy when you're mean" [Albert Gator attends an anger management class at the community center with some other mean-looking predators. This one's ambiguous: is Albert taking responsibility here, or is his reliance on the liberal establishment and its "therapy" merely going to lead to more excuses?]

"It's not right to be angry because others stayed in school and earned better homes than you have." [Stumpy hands a "Go back to school!" pamphlet to Bethany Beaver. The adult education class is presumably offered by a for-profit college, since no one should be taxed to provide such services to Takers.]

And finally, we reach the book's triumphant conclusion:

Now get back to work, you slacker!

Stumpy's mom was a genius, sending him to that support group where he'd see all the losers and reject them like that; clearly, she had inculcated the Right values in him, else he would have been swayed by their liberal lies and learned to be a moocher like them.

We're looking forward to the sequel, in which we learn that Baxter Beaver deserves to have his next dam subsidized by an enormous tax cut, while Bethany -- deep in debt but proud of her degree in gnawing technology -- gets laid off because imported trees are cheaper. Meanwhile, Gilda Goose gets her tubes tied and gets a job in a clinic, but she and the doctor she works for are shot dead because they cracked unhatched eggs. And Albert Gator chanels his sociopathic tendencies into a lucrative real estate business, then runs for president on a platform of sending Speedy Gonzales the hell back to Mexico.

Or maybe Stumpy and his entire family will perish when the enormous Straw Man their story is built on collapses into a pile of messy, complex realities. Either way, it's a pretty impressive little story that teaches children the important lesson that everyone is completely responsible for their lot in life, that wealth is solely the result of individual effort, and that poor people are lazy takers who simply need to get their act together.

Amazon Kindle e-book $5.99; or in beautiful dead-tree edition for only $9.95 Autographed paperback available directly from the author's Facebook page or at Tea Party rallies she attends.