Sundays With The Christianists: A 'World History' Textbook That Redistributes Reality To Home-Schooled Children 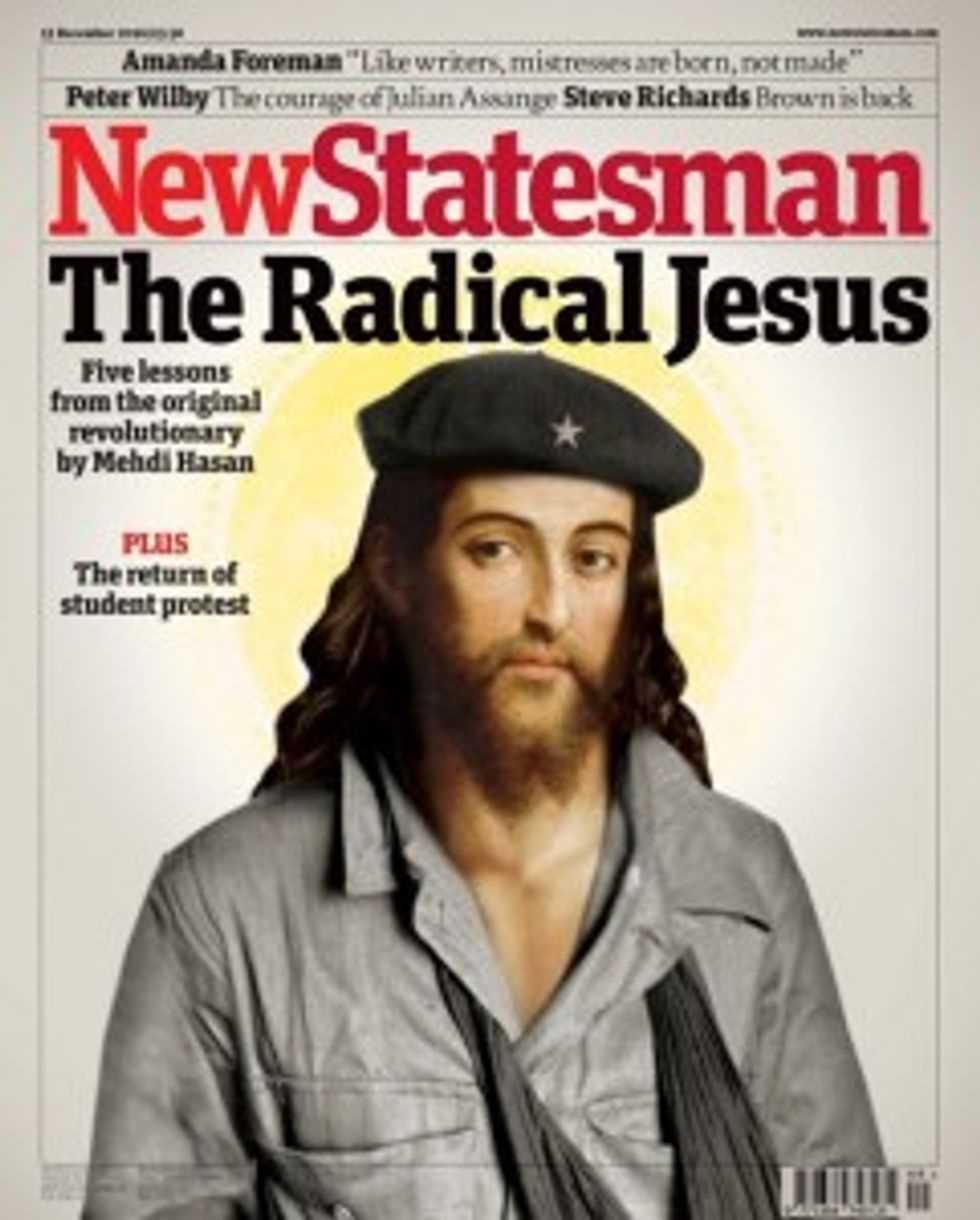 So now that we're well into the nineteenth century with our hilarious 10th-grade textbook,World History and Cultures In Christian Perspective, we're getting to some of the pivotal Bad Guys from the editors' closetful of nightmare boogiemen. Last week it was Charles Darwin and a collection of terrifying Victorian philosophers who advocated such radical notions as benevolence to the poors. This week, we'll be tackling the monster that scares the editors more than science, maybe even more than the Pope: Godless Communism!

And by this, we mean actual communism, not just all of the little bits of social reform that these nimrods also like to call "communism." It is worth noting that, by the time this edition of the textbook was published, in 1997, the USSR and Eastern Bloc had already fallen, China's economy was solidly capitalist, and the remaining countries that could be called "communist" could be counted on one hand. So of course, World History presents communism as the single greatest threat to freedom in the world, because after all, the UN still exists.

But let's not get too far ahead of ourselves! Before we get to Karl Marx, let us first learn the sad lesson of Europe's Utopian Socialists, whose utopian communes invariably failed, because the

evident trends in a socialist society included envy, resentment, conflict, and the desire to enforce equality by taking from the productive and giving to the nonproductive members of the society The main error of socialism -- that man is capable of perfection --was proved time and again, demonstrating the sinfulness of human nature and making "utopia" an impossibility.

More importantly, these experiments in socialism failed because despite the laudable, if naive, desire to "improve the lot of mankind" focused only on mere physical realities like feeding and sheltering the poor:

But while attempting to aid society many also rejected Biblical Christianity as the true cure for humanity’s ills and instead accepted all sorts of ungodly philosophies (i.e. -- revolutionary nationalism, modernism, idealism, dialectic thinking, Darwinism, socialism) as the solutions to man’s problems. Without Christian character, any attempt to reform society will ultimately fail (Prov. 14:34). As people rejected the Word of God and embraced the vain philosophies of men, they set the stage for the death and devastation of the world wars, reaping the "whirlwind" of destruction sown by their unbelief (Hos. 8:7).

Yes, kids, you read that right: Both world wars ultimately resulted from Europe's rejection of the Bible. We are sort of wondering how Europe's 65 years of non-warfare (OK, excluding former Yugoslavia) and increasing secularism since the end of World War II square with that claim, but our mention of the UN above is already too much reading ahead. We'll just have to wait.

Despite its post-USSR publication date, World History is at heart a Cold War document. For instance, consider this definition of "communism" (again, it is in italics, so it is going to be on the test):

Communism is a form of socialism which advocates the violent overthrow of existing governments with the goal of changing society and ultimately perfecting mankind. Communism always results in a totalitarian dictatorship that dominates the person, property, and even thought of its citizens by means of force and terror.

That sounds pretty objective to us! Obviously, nobody would ever want to be a communist...or would they?

The ideas of many modern socialists and political scientists have been largely adapted from Communist ideology, and Communism has adversely affected the lives of the millions of people under its domination.

Oh, dear. We bet the universities are just full of them. (This is probably as good a place as any to mention that World History does not recognize any differences between communism as practiced by the parties with that name in the USSR and China and the purely theoretical "real communism" that you and your long-haired hippie friends in college said had never been really tried, man -- from theory to totalitarian application, it's all BAD, OK?) So what are the foundational ideas of communism, then?

Foundational to Communism is the atheistic idea that there are no absolutes -- that everything in the universe is in a constant state of change and flux, and that the only reality is matter in motion.

Those darn atheists! You see what believing in matter gets you? Stalin! (And also Yossarian holding Snowden's bleeding body in the windy fuselage of a flak-damaged B-25: "Man was matter, that was Snowden's secret.") Gosh, we wonder if there any wider implications of this clearly dangerous worldview?

Once Communism is established, it seeks to transform society and the nature of mankind into an atheistic, humanistic image of "perfection" -- a self-sufficient, "pure" community with no need for God. Communism is the epitome of rebellion against God by Satan and by fallen humanity; it is the total repudiation of the Judeo-Christian tradition. Many Christians see Communism as the prototype of the beast-state described in the book of the Revelation which seeks to engulf and enslave humanity.

It is time for the world to realize that Communism is not just another political philosophy but a religion -- a religion which promises utopia to its devotees. The state is worshiped in place of God.

(That last bit is from Satan is Alive and Well on Planet Earth, a 1972 book from Hal Lindsey before he started writing books that were actually labeled fiction.) Again, we simply cannot guess whether the collapse of "international communism" in the early 1990's has put any discernable dent in Christianists' certainty that a communist "beast-state" is on the way; presumably, however, the Affordable Care Act's requirement that people buy health insurance from private companies is close enough for some believers. It seems like a bit of a letdown from being scared of the USSR, though. Maybe you just have to go to Armageddon with the Beast you have, not the Beast you wish you had.

So who were the knuckleheads that brought this awful system into being?

Communism is also known as Marxism-Leninism after two of its most infamous theorists, Karl Marx and Nikolai Lenin. As we examine the lives, words, and deeds of these two men and their disciples, we find not only a venomous hatred of God but also a total contempt for human life and liberty. Marx formulated the basic ideas of Communism, and Lenin (who added his own ideas) was the first to put Communism into practice on a wide scale. A third person, Friedrich Engels, organized Marx’s ideas into a pseudo-scientific format. The theories of these men have strongly influenced the social sciences and have distorted many modern writings on history, government, and education. The damage that they have done to society is inestimable.

One might read that line about "the damage they have done to society" as an indictment of the cruelties of communist governments in the 20th century, but that's far too limited a reading -- World History also considers virtually all of modern academe as tainted by Marxism, which is ultimately how we ended up with a clown like Rick Santorum campaigning on the notion that colleges are "indoctrination mills" that are cranking out Marxists. Marxists that want to be hedge fund managers, but still.

We have only gotten through -- literally! -- the first page of the textbook's chapter on communism, and this post is already getting on the long side. So let us close for this week with a brief look at what a sidebar tells us are the differences between "communism" and "socialism":

As previously stated, socialism is an economic system in which the government, rather than individuals, controls a nation’s businesses and industries. Socialists believe that the individual is unimportant when compared to the welfare of the group. They insist that the government must strictly regulate and control a nation’s resources in order to ensure that everyone receives an equal share of the wealth. Communism is a form of socialism which requires a violent, bloody revolution in order to set up a totalitarian dictatorship that controls every aspect of its people’s lives through force and terror. The main difference between socialism and Communism lies in their methods: what socialists (i.e.—the Fabian Society, ”democratic socialists" etc.) seek through legislation, regulation, and taxation, Communists seek through violent revolution. Both philosophies enslave people in a system that deprives them of their freedoms and property.

What's kind of weird here is that, by this definition, not only are there hardly any communist nations anymore, there also aren't really any socialist countries, either. The European countries that these folks almost certainly consider "socialist" are probably going to be pretty ticked off when they learn that they are "enslaved"...or at least they would be, if they'd just take some time off from their 6-week vacations and read the Bible to learn how bad they have it.

And finally, just because there's almost never a topic that can't be improved by a Randy Newman song, here's his paean to Karl Marx, with a far more prosaic explanation for why Marxism won't work:

Next Week: More Marxy-Snarxy Commie Follies! Also, Big News for fans of this feature: We have finally found an affordable copy of the third, 2010 edition of World History & Cultures on the e-bay machine, so we can be sure to be up-to-date on what weirdass versions of reality are being tossed at today's Home-Schooled darlings!