Sundays With The Christianists: A 'World History' Textbook That Spins One For The Gipper 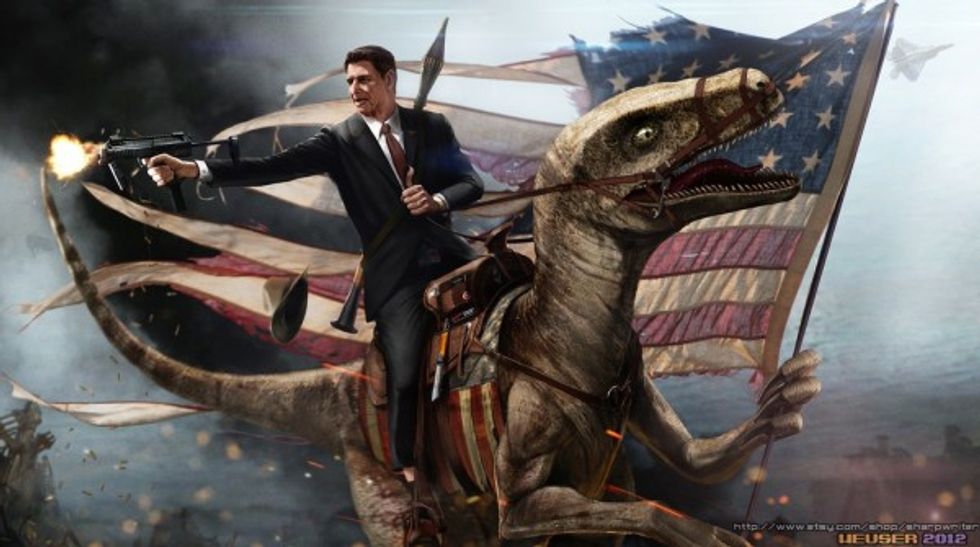 One of the nifty things aboutWorld History and Cultures In Christian Perspective, our 10th-grade textbook for homeschoolers, is that the editors do not suffer from any uncertainty about anything. None of that nonsense about differing opinions and disagreements among scholars here -- things are on God's side or are evidence of depravity, and it goes without saying that only conservative politics are on God's side. Needless to say, the editors find a lot to admire in Ronald Reagan. (Which reminds us -- we need a little mood music if we're going to talk about ol' Ronnie.) We'll wrap up the book's look at the Cold War by spending this week and next with the man whose understanding of history was every bit as accurate as the editors'.

Needless to say, we have to start with The Bomb. What a wonderful, fine thing The Bomb was, protecting America and Western Europe from the spread of Godless Communism! The book's discussion of nuclear politics starts with a hymn of praise for Edward Teller, who pushed through development of the hydrogen bomb over the objections of the

Oppenheimer was not "alleged to be" pro-communist in this version, he just was. The Bomb is just the greatest thing to ever come along, and the book is openly contemptuous of any suggestion otherwise:

Throughout the 1950s, the United States possessed an overwhelming nuclear superiority that made the Soviet Union fearful of confronting the free world directly. Because of this, the entire propaganda apparatus of the Communist bloc was directed toward somehow neutralizing or eliminating the United States' nuclear arsenal. Soon bitter proclamations about the "immorality" or "inhumanity" of nuclear weapons, or about the dangers to mankind of nuclear warfare or atomic fallout began to fill periodicals in the West.

Yup -- the very notion that nuclear warfare might be bad for humanity is itself a communist plot, and apparently, were it not for Soviet propaganda, no one in the country that actually dropped two nuclear weapons on human beings would have had any qualms about it otherwise. We aren't quite sure what book of the Bible that's from, frankly. The book decries the 1963 test-ban treaty as merely a Soviet ruse to prevent the West from developing better bombs, while the USSR supposedly "went on unhindered with its program of nuclear testing." Similarly, the textbook argues that even worries about nuclear annihilation were communist-inspired exaggerations. Consider the following evidence-free paragraph:

The next step in the campaign for Western disarmament was to persuade the public that the real danger in the world was not Communist aggression and expansion but the threat of nuclear warfare. By 1980, the Soviets had so many more lethal weapons than the United States that the threat of Soviet "nuclear blackmail" was a real possibility With a weakened American nuclear arsenal neutralized by an overwhelming Soviet superiority the Communist bloc could "blackmail" the free world into surrender with the threat of a devastating nuclear strike.

Now, they're not saying we wouldn't get our hair mussed...

World History is also no fan of diplomatic relations with the Communist Bloc, claiming that 1970s-era "economic cooperation" and "cultural exchanges" mostly resulted only in "an even greater transfer of technology from the free world to the Communist bloc that enhanced the Communists’ ability to make war" and "increased Communist propaganda in the West and the presence of more Communist agents and spies."

Happily, all that nonsense was about to end, as the cavalry rode in at the last minute to save the day:

By the late 1970s, many people, especially in the United States and Great Britain, began to take an active political stand against the tide of socialism, immorality crime, drug abuse, abortion, and Communism threatening the free world.

That's some list! We are somewhat surprised they left rock 'n' roll off there. We learn that the US and Britain were ripe for a revival of "conservative emphasis upon religious and moral issues such as sanctity of human life, the value of prayer and the Bible, and the importance of the family and traditional values."

First comes the awesome British lady, Margaret Thatcher, who made everything right as rain:

Her election was a response to the worsening conditions of Britain’s failing socialist economy and a sense of Britain’s failure to assert itself as a sovereign power in world affairs. Prime Minister Thatcher’s efforts to lower taxes, deregulate business, cut government spending, and reduce welfare dependency met with great success, and the British economy began to improve

As we noted a couple weeks back, there's no mention of Thatcher's career-saving pledge to keep the National Health System intact, because that would make her a compromiser with socialism, and therefore evil. Thatcher is also praised for "renewing patriotism" with the bloody stupid Falklands War, which was completely justified and glorious, although of course it met with "UN disapproval" and "liberals in the British Parliament and media condemned the war," because they were commies. We even get the impressive factoid that

British strategic bombers made the longest bombing missions in the history of warfare by flying all the way from England to bomb the Falklands and then returning to England, approximately a 12,000-mile round trip.

All in all, it was a pretty awesome little war, and since "the British victory was met by a huge outpouring of patriotism," totally worth it. Also, there's nothing in there about punk rock, the Brixton riots of 1981 or 1985, increasing inequality, or much of anything to suggest that anyone in Thatcher's England was ever unhappy.

And now we finally get to learn about the excellent awesome coolness of Ronald Reagan! We are told that

President Reagan’s rhetoric inspired many, particularly his emphasis that (1) budgets should be balanced and (2) trade and business should be free from government interference. These principles reflected the most basic tenets of free enterprise capitalism that had made America great. The Reagan years became the longest period of vigorous and continuous economic growth since World War II, with lower taxes and less government regulation. Though deficit spending and the national debt skyrocketed, sound conservative thought flourished on many levels during the 1980s.

Hey, remember that time in October 1983 when Reagan responded to the truck bombing of the Marine barracks in Lebanon by invading Grenada two days later? In a beautiful bit of bullshitting via chapter organization, the textbook completely divorces the two events; the Beirut fiasco ends a section on "The PLO and Lebanon" (which actually precedes the entire section on the freakin' Vietnam War) and then, a full 13 pages later, we read about Reagan's brave rescue of the tiny nation of Grenada, which occurs under the most dire geopolitical threat:

President Reagan learned that Fidel Castro planned to use the island of Grenada in the West Indies as a military base to invade the mainland of South America. A small force of Cuban military men had already arrived on the island when the people of Grenada and other Caribbean island nations called on the United States for help. To prevent a full-fledged Cuban invasion, Reagan sent American troops to Grenada to defend its people. The people of Grenada gratefully welcomed the American soldiers to their island, and with the help of small forces from neighboring islands, U.S. troops quickly rounded up the Cubans and shipped them back to Cuba.

Whew! That was a close one! Fidel Castro was on the verge of invading all of South America, but Ronald Reagan heroically saved the hemisphere! We'll close today's lesson with an alternative view of Grenada, via a Doonesbury Sunday strip from a few years after the invasion:

Next Week: Reagan Gives America an SDI but never mentions AIDS. Also, a complete lack of any mention of Iran-Contra!