Sundays With The Christianists: A ‘World History’ Textbook To Haunt Your Home-Schooled Dreams 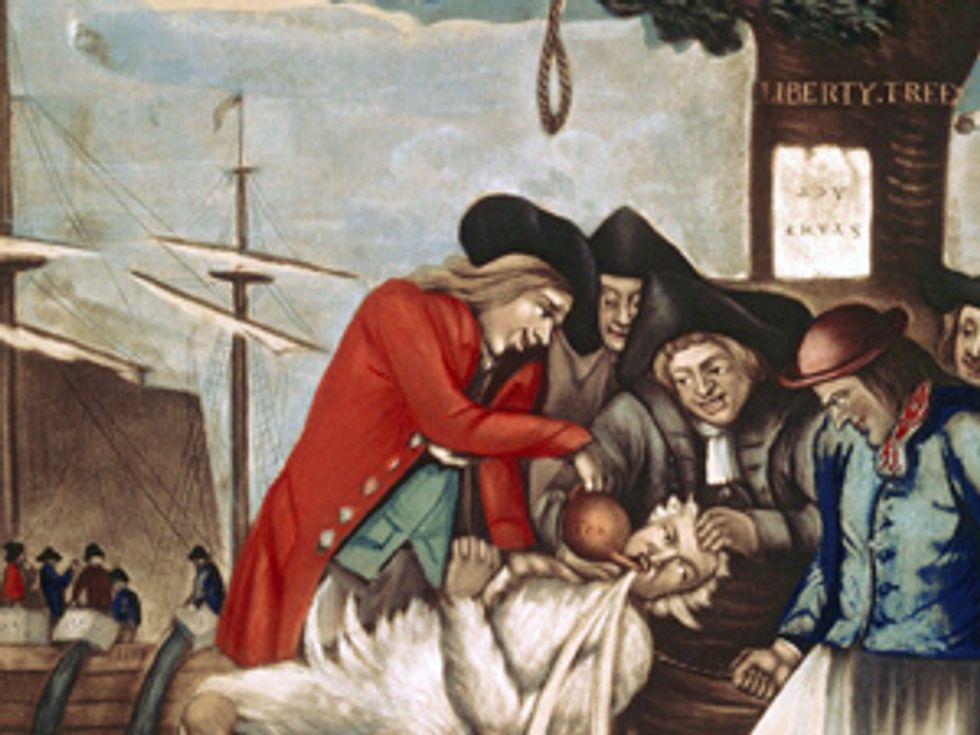 Charge up your Flux Capacitors, folks! It's time for our weekly foray into the past -- or at least, the past as it happened in the fevered imaginations of fundamentalist Christians. Our text is again World History and Cultures In Christian Perspective (A Beka Book, 1997). This book does, in its tendentious way, present mostly-factual history. You actually could learn a lot about world history from World History, even if you dismiss the Creationist nonsense, the relentless anti-Catholicism, and the obsession with connecting historical events to the ideological hobby-horses of the modern American religious right. We only focus on the craziest stuff here in our Sunday series.

On the other hand, there's also been enough crazy for five posts so far, and we're only up to the 18th century.

So last week, we learned how godless Enlightenment humanism led to the madness of the French Revolution. This week, we'll see how England and America managed to avoid anarchy. Do you suppose that being Bible-believing Christians had something to do with it?

With well-crafted narrative tension, we are first told how dangerously close England came to suffering the fate of France. What's worse, this decadence was not due to Romish meddling, but to the English people's own turning away from the Bible!

By the turn of the 18th century the English people had more freedom than they had known at any time before in their history but they had left the teachings of the Bible and had become slaves to their own passions. Gambling was the favorite indoor sport, while gin and beer were the favorite drinks (p. 330).

Needless to say, moral depravity is the only possible reason for all that gin and beer; any other explanations, such as rapid urbanization, social upheaval, the huge profits to be made by distilleries, or widespread poverty are just making excuses for morally-weak poor people who turned away from God. And you know what happens to debauched people who drink? They read humanistic philosophers, of course!

As England’s morals continued to slip, she became susceptible to the ideas of the Enlightenment. The late 17th and early 18th centuries in England were known as the Age of Reason because several English philosophers and writers adopted forms of rationalism, deism, and other humanistic philosophies. One of the most influential philosophers of this age was John Locke (1632-1704). Although Locke claimed to be a Christian and promoted Christian morals, he often supplanted the authority of the Bible with humanistic rationalism and empiricism, the belief that experience is the only source of knowledge. Locke wrote: "The last resort a man has recourse to in the conduct of himself is his understanding" This declaration leaves out the supreme authority of the Word of God, which truly has the last word on how we should conduct our lives.

So, remember what we said about this book being mostly factual? This paragraph is a lovely example -- it's not exactly lying about Locke, and yet it unmistakably paints him as a dangerous bad guy, and as usual, his ideological impurity even negates his own "claim" to faith. Once again, World History seriously sins by omission: This is its sole mention of Locke, so a homeschooled child might live unpolluted by any sense that Locke influenced America's Founders.* Still, at least he's mentioned -- Thomas Hobbes is nowhere to be found. But let's learn more about those awful English humanists!

Another philosopher of the Age of Reason was David Hume (1711-1776). Hume promoted the philosophy of skepticism -- the idea that to know truth is impossible, and that knowledge is uncertain. Hume’s skepticism rejected Christianity’s stand on the absolute truths of the Bible, as well as anything that was supernatural (i.e. -- God, miracles, etc.).

Insisting on evidence is just plain crazy, after all. There's already a book written by God that says that miracles are real, and as the bumper sticker says, that settles it.

Just when we're good and worried that, with "no spiritual restraints to preserve order and peace, England was ripe for the same crisis that ravaged France during the Revolution," a hero comes riding over the horizon, and he's literally on a mission from God!

But because of God’s providence, England would be spared from judgment. The ministry of ]ohn Wesley led the British nation to spiritual revival and reconciliation with God...

Thousands of British citizens responded to the message of salvation by faith alone, and in the power of Christ their lives were transformed... The results were such, as ]ohn Wesley put it, that no "reasonable man can deny . . . that God is now visiting this nation, in a far other manner than we had cause to expect. Instead of pouring out his fierce displeasure upon us, he hath made us yet another tender of mercy: so that even when sin did abound, grace hath much more abounded." England became a changed country (p. 331).

Whew! That was so close! This 1997 edition of World History quotes a lengthy passage by Woodrow Wilson to the effect that the Wesleyan Revival saved England from chaos and bloody revolution, an irony that might be lost on Glenn Beck fans who think of Wilson solely as the father of the "cancer" of progressivism; we really need to get the 2010 edition to see if that flaw has been expunged.

And now that the dangers of Human Reason have been, for now, successfully avoided, we're ready for the American Revolution. Surprisingly, the texbook presents an objectively factual narrative of the events leading up to America's founding, sympathetic to the colonists, of course, but without a word about divine inspiration or Providence. It does pause for a bit of jingoism:

On ]uly 4, 1776, the Second Continental Congress unanimously adopted theDeclaration of Independence, the most important human statement of political principles in the history of the world (p. 338).**

But on the whole the main text's handling of the War for Independence, the Articles of Confederation, and the Constitutional Convention are much like what you'd find in a secular history text. There is ideology, of course, but it's segregated in a couple of "boxes" separate from the main text. In one, which we touched on last week, we learn why the American and French revolutions were so different:

The most important difference was the spiritual condition of the two nations at the time of their struggles. France, under the influence of the Enlightenment, had largely rejected Christianity and turned to humanistic philosophies. America, however, had a strong Christian heritage revived by the Great Awakening, which gave her stability and unity -- things France sadly lacked. In a word, America had the benefit of righteousness, a characteristic that always brings God’s blessing.

The other differences between the two nations stem from this fundamental contrast. For example, America’s Christian heritage produced a people of high moral character and integrity who were well-prepared for the responsibilities of political liberty. Biblical values guided the English colonists in their attempt at reconciliation, their decision to take a stand for individual liberty, and their eventual fight for independence. The people of France, on the other hand, had abandoned Christian morality and had lost their integrity; their sinful passions -- greed, envy, bitterness, lust -- controlled them, leading the nation from a bloody rebellion to tyranny (p. 339).

Man, those lustful, greedy, bitter French! They were awful, weren't they? Happily, no American Founders were ever lustful, which will certainly leave the real Benjamin Franklin sorely disappointed. And American colonists of course never even imagined letting their sinful passions run wild, which may be why this textbook does not include that staple of high-school history books, the British engraving "The Bostonians Paying the Excise-man," which depicts a Crown tax man, tarred and feathered, having scalding tea poured down his throat. Good times!

The chapter closes with another short boxed-off essay about the U.S. Constitution; even this focuses on the liberty and justice for all stuff, and only drags God into the closing paragraph:

To the Americans of the late 18th century the hand of God was clearly visible in the framing of the Constitution. They realized, however, that, even with such a remarkable Constitution, a great nation could be built only upon the continued blessing of God, which comes from the righteousness which "exalteth a nation" (Prov. 14:34).

Compared to David Barton's nutty claims, earlier this year, that the Constitution incorporates "verbatim" passages from the Bible, this is an almost timid claim for God's influence on the founding of the United States. We wouldn't be surprised if this section of World History has been criticized for insufficient emphasis on God's direct involvement in the drafting of the Constitution. Hey... are these guys even really Christian?

*Locke doesn't even show up in the index of a couple of Christianist U.S. History textbooks that we'll look at later in this series.

** The italicized text is repeated, word for word, in he publisher's 8th-grade US History text, America: Land I Love.

NEXT WEEK: The Industrian Revolution, the British Empire, and the roots of -- ladies, please try not to faint -- Darwinism.