Sundays With The Christianists: American History Textbooks For Homeschooled Flappers And Bootleggers 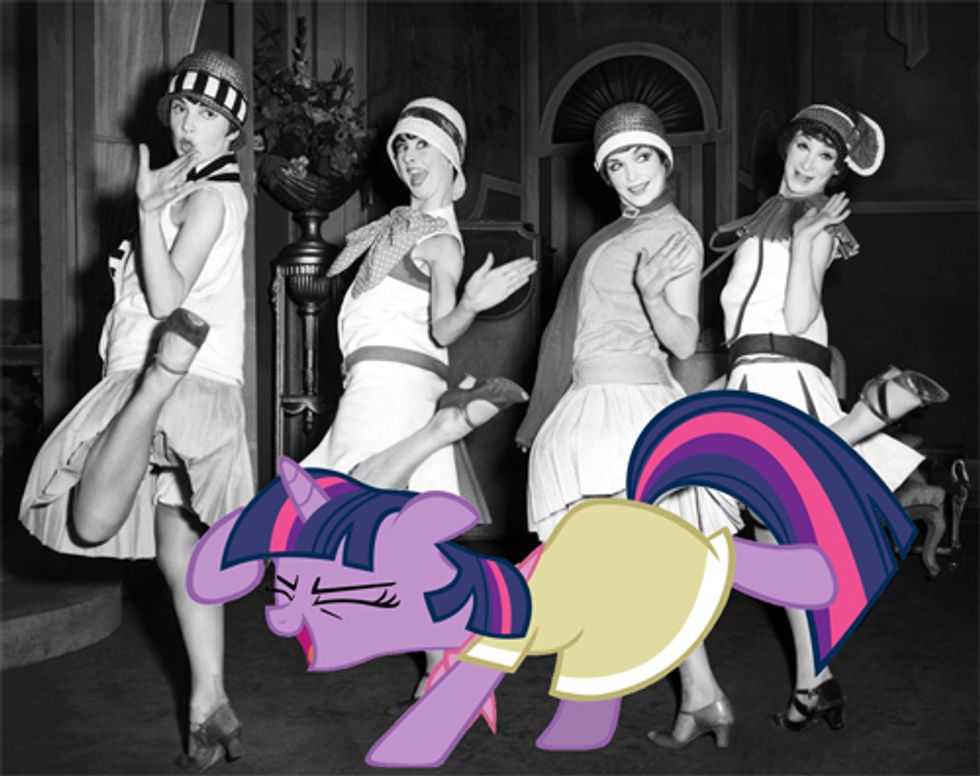 OK, this is the week we finally get to the flappers, you fappers. We've been spending a little extra time with our Christian textbooks' treatment of the 1920s, which turns out to be a fine decade for the authors to lecture about the culture wars of the last quarter of the century. And as usual, our 8th-grade text from A Beka,America: Land I Love, is delighted to jump in and let kids know exactly where America was deceived:

World War I boosted America’s economy and spurred great advances in technology. Prospering businesses and industries brought a higher standard of living, allowing people to work to provide for their families. Most Americans still held to traditional values based on Biblical principles. However, the Roaring Twenties became a turning point in American thought and culture, as prosperity encouraged Americans to pursue pleasure and material gain. Entertainment especially reflected an increasing decline in morality.

And of course, because this is a Christianist textbook for 8th-graders, we don't learn too much about what that decline entailed, except that the divorce rate increased and movies glamorized speakeasies and contraband booze. It's presumably left to the classroom or parental teacher to explain that there was also (shudder!) dancing.

Our 11th/12th-grade textbook, United States History for Christian Schools (Bob Jones University Press, 2001), takes care to provide similar tut-tutting about the morality of the '20s, worrying about the influence of Darwin and Marx:

Darwin’s evolutionary theory undermined the Scriptural account of creation while Marx’s economic philosophy denied the spiritual side of man as well as man’s depravity. Although these ideas had been too radical for most nineteenth-century Americans to consider, evolution and socialism began to find widespread interest and acceptance in the 1920s. A growing disregard of Scriptural truth naturally accompanied the acceptance of these views.

Even worse, a perverted Viennese (duh!) Jew came along with a bunch of crazy ideas about the mind:

The ideas of Sigmund Freud, which became popular in the twenties, added further disdain to moral absolutes. For this Austrian psychologist, sexual disturbances in childhood explained the development of emotional problems later in life. Sex is pervasive in man’s unconscious motivation, according to Freud, and he contributed to the popular sentiment that one has to get rid of inhibitions in order to have a healthy emotional life. Thereafter, many Americans argued that self-restraint, which they called "repression," led to emotional disorders, and that psychoanalysis was the cure. For some, having lost their moral bearings, the psychiatrist replaced the minister as counselor.

Even physics became morally suspect, what with Einstein and relativity -- U.S. History is at least careful to note that nothing in the theory actually claims to apply to the moral universe:

By 1929 a Harvard mathematician confessed, "The physicist thus finds himself in a world from which the bottom has dropped clean out." Seemingly, the absolutes of science were no longer absolute, and, unfortunately, many Americans erroneously transferred Einstein’s ideas to the spiritual realm. (Einstein himself opposed this use of his theory.) According to their faulty reasoning, Scripture could no longer be considered as absolute truth. Thus, they thought they were free of its moral restraints and responsibilities because these values were dependent upon the observer.

And where Land I Love is hesitant to go into any detail about moral decline, U.S. History is happy to share at least some of the awful truth:

The modern ideas that gained acceptance in the 1920s led to a social revolution in America. So obvious was the new disregard for moral standards that the decade has often been called the jazz age, the ballyhoo years, the age of excess, or more commonly, the "Roaring Twenties." The young people caught up in this moral vacuum were known as "flaming youth," and they captured attention with their rebellious behavior.

Egad! Jazz! Before you know it, they'll be playing boo-jee woo-jee music and consorting with negroes! And even more tawdry stuff followed -- women got uppity:

Before World War I police arrested women in towns and cities for smoking or for dressing immodestly, but during the twenties some young women in the cities flaunted their new-found freedom by drinking and smoking in public and by shortening their hemlines. Bobbed hair and the boyish look were fashionable for these "flappers." Immorality became glamorous and virtue was too old-fashioned for many of the pleasure-seeking young people of the era.

It's really rather astonishing just how much the textbook blames "moral decline" on women, who obviously can't be trusted with machines or freedom:

The breakdown in morality naturally weakened the family. From the 1870s to the 1920s the U.S. population increased three hundred per cent, but divorce increased two thousand per cent. Several factors contributed to this rapid rise in divorce. Women were freed from some of the chores around the house by the use of new inventions or the provision of new services from local businesses. In addition, families were generally smaller than in previous generations. The result was that wives often had time for work and social activities outside the home, and sometimes those interests interfered with family relationships. Also, the newspapers and the silent screen were ablaze with stories of immorality, and that emphasis naturally changed attitudes about purity and fidelity.

We're just going to pause and let that sink in: women leaving the house destroyed America.

Carrying on! Land I Love also finds cultural poison seeping into America from a sleazy foreign capitol, complete with the things you need to know for the test:

During the early 20th century, a group of American writers known as the Lost Generation rejected the traditional, Biblical morality of American culture. Young writers like Ernest Hemingway and F. Scott Fitzgerald represented a generation that wanted to escape the "narrow confines" of traditional values and copy the loose morality of Paris. A "sophisticated" Parisian way of life began to influence the artistic communities in New York, Chicago, Hollywood, and San Francisco. While critics trumpeted the writings of the Lost Generation, most Americans rejected the literature as too immoral or depressing.

You know, the stuff that they teach in every public school to this day. Evil stuff, it is -- stay away!

Fortunately, there was also a fundamentalist counterattack. Land I Love provides an extended discussion of the career of evangelist Billy Sunday, who started as a baseball player with the Chicago White Stockings, but in 1887 got born again and eventually became "the most exciting, effective, and popular evangelist of the early 20th century" (not to mention the kindest warmest bravest most wonderful human being they've ever met). And in true Land I Love fashion, the book is careful to give his stats, which are no doubt listed on the back of his Evangelist Card:

In a ministry that lasted until 1935, Billy Sunday preached to an estimated 100 million people. Several hundred thousand people were saved during his revivals.

The textbook also claims that all those ladies marching around with signs and hatchets and preaching against the sorrows of gin were pretty much secondary to Billy Sunday in getting Prohibition passed:

Having seen lives ruined and homes destroyed by alcohol, Billy Sunday preached strongly about the evils of liquor. Wherever he preached, bars closed for lack of customers. Billy Sunday was perhaps more responsible than any other person for the adoption of the 18th Amendment to the Constitution in 1919, prohibiting the sale of alcoholic beverages. Prohibition resulted in healthier babies, fewer broken homes, and a decrease in the number of diseases and deaths caused by alcoholism.

And while the book is correct that Prohibition actually did result in substantial reductions in drinking, it sort of leaves out the minor detail that it became wildly unpopular, too, attributing such beliefs to all those movies "glamorizing" speakeasies and bootleg liquor. Both books also connect the trade in illegal liquor with the rise of organized crime, but that's not evidence that moral crusades can have unexpected consequences -- it's just more proof of the corrupting influence of alcohol, and maybe of women not having enough housework to keep them home.

As for the financial excesses of the '20s, U.S. History frames the wave of Wall Street speculation as an outgrowth of Americans' personal irresponsibility, which was fueled by a consumer society:

Advertising began to coax the public to buy even if they did not need the product or have the money. Mass production was providing greater and greater numbers of products that needed to be sold. Therefore, mass consumption was also necessary ... Ads bombarded consumers with temptations to spend, not save; to enjoy the present, not worry about the future; to pamper themselves, not practice self-denial. Materialistic values undercut Biblical values as advertisers increasingly persuaded Americans to be better consumers of goods than producers of them.

It's always sort of fun to see the gospels of Free Market and moral restraint crash into each other like that. Land I Love takes a slightly different approach: instead of discussing the stock bubble and crash in its chapter on the '20s, it moves that topic into the next chapter, which is titled "The Rise of Big Government: 1929-1939." It's a pretty neat trick -- while they don't actually claim that FDR caused the 1929 crash and the Great Depression, they place the starting point in a chapter on "Big Government," so that the problems are clearly connected with the bad ol' Democrats. It's a bit reminiscent of another bit of subtle editing in in A Beka's "world history" book, in which the bombing of the Marine barracks in Beirut and the invasion of Grenada, which were separated by two days in reality, get dumped into two different subsections of their chapter on the 1980s, and are kept a full 13 pages apart. Editing is fun!

Next Week: The Great Depression, and how socialists exaggerated it to encourage a communist takeover.