Sundays With The Christianists: American History Textbooks For Revolting Patriots 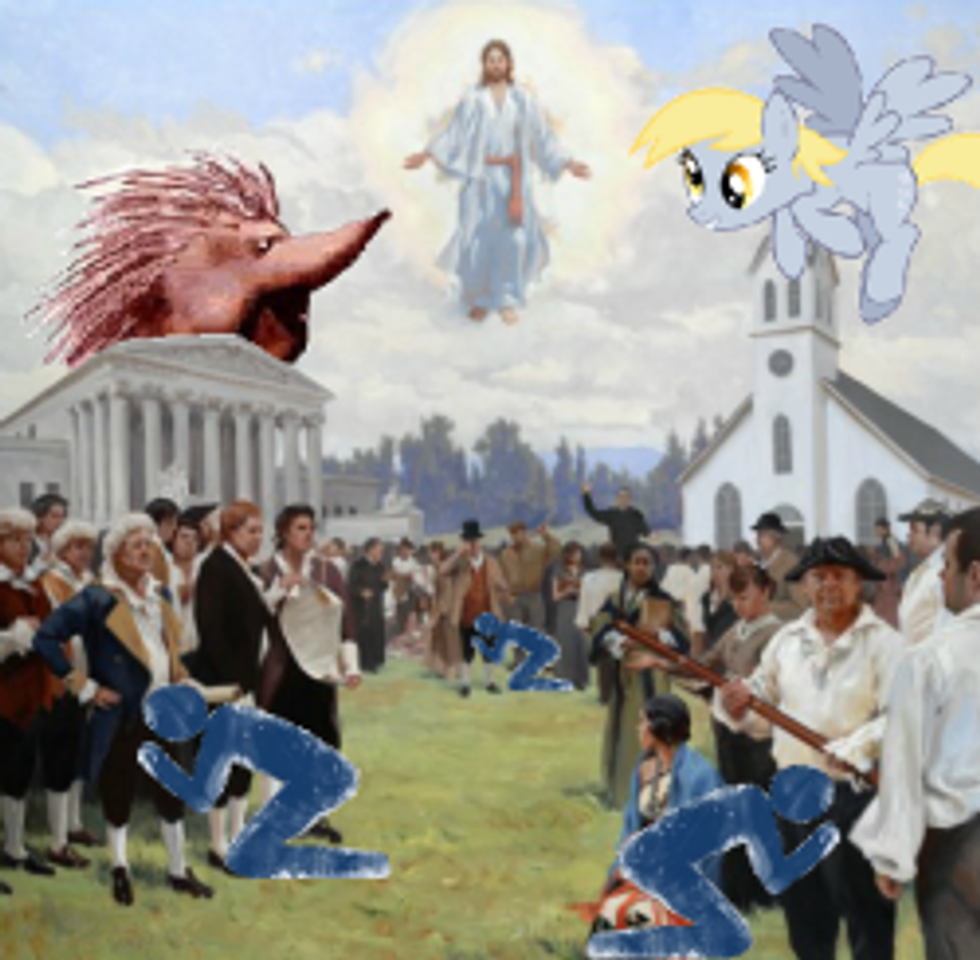 Fresh on the heels ofAmerica's Bestest Holiday, it's time for another delightful visit to the world of Christianist textbooks, and as it turns out, they're talkin' about a Revolution, too. As we've noted in some of our earlier visits to wingnut history books, the editors of these books tend to be fairly straightforward when it comes to military history, and the American Revolution is no different. Both of our samples, the 8th grade America: Land I Love (A Beka Book, 1994) and the 11th-12th grade United States History For Christian Schools (Bob Jones University Press, 2001), present the conflicts and events of the period in terms that wouldn't be out of place in a secular textbook -- there's no idiocy about God helping out the colonial forces with a bunch of "miracles," for instance. It's as if once the editors have some actual war-making to talk about, they feel free to set aside the Culture War that's at the heart of the books' agenda.

Still, there are subtle differences. Where a secular text might note that colonial anti-Catholic paranoia was stoked by the 1774 Quebec Act, which established Catholicism as the province's official religion, Land I Love suggests that Colonial propagandists had it right:

For years, colonists had feared that an Anglican bishop might be sent to America to dictate their religious affairs, but now the Quebec Act brought about an even worse fear for the future of religious liberty -- the fear of being ruled by the pope.

Land I Love also puts a Reagan-era spin on colonial gripes over taxation, suggesting that Prime Minister William Pitt sought to pursue a 1760s version of supply-side economics (he "planned to lift trade restrictions on the colonies to boost private enterprise and thus increase the amount of tax money sent to Britain") while Chancellor of the Exchequer Charles Townshend was some kind of 18th century Ted Kennedy who "believed that the colonies should pay what he considered their 'fair share' of taxes" to the Crown. Since both texts date from the days before America had to be taken back from the Kenyan Usurper, the Boston Tea Party is mentioned only as an anti-British act, and both texts are careful to note that the colonists felt just awful about destroying private property, but they had to in order to make their point.

For its part, U.S. History presents a similar, mostly-straightforward discussion of events and motives, with occasional forays into weirdness, like a full-page text box on the essential differences between the American Revolution and later Revolutions in Russia and France. It starts by quoting Mikhail Gorbachev addressing the UN in 1988 and the French and Russian revolutions "two great revolutions." This aggression, of course, will not stand, man. The text then adds that "like most Communist leaders, accustomed to censoring history for their own purposes, Gorbachev conveniently ignored ... the American Revolution." It then explains that "The French and Russian revolutions were about power; the American Revolution was about freedom" and goes to great lengths to show that the bad European revolutions were perpetrated by "a narrow, ruthless minority" who sought not only to dethrone kings, but God Almighty as well. In America, on the other hand,

the Patriots were simply preserving the freedoms and rights of self—government that had been nurtured and enjoyed in America for over a century. Popularly elected assemblies continued to govern in the states, as they had for years, and many Christians who feared the religious tyranny that comes with political tyranny felt compelled to join the Continental line.

Both textbooks bend a knee to the Declaration of Independence, of course, although where U.S. History is content merely to describe it as both an argument justifying separation from Great Britain and as a "statement of universal principles" that would shape the nation, the editors of Land I Love go a bit farther in pounding the message home, explaining (in italics, for easier rote memorizing) that Thomas Jefferson and his cohorts had drafted "the most important human statement of political principles in the history of the world." And of course, there's no mention of Enlightenment philosophers here:

The Declaration of Independence openly recognizes that God created all men, and that they have a right to be treated with the dignity due God’s special creation. This includes (1) respect for human life and private property; (2) equality before the law, and (3) responsible liberty.

Just to be sure that kids don't get any crazy ideas about rebellion, Land I Love also emphasizes the essentially conservative nature of the Patriots' break with Britain, which in the end, would even make England free:

Americans had inherited their love of liberty from a long history of English tradition. The English people held a deep respect for political and religious freedom. England had come closer to realizing true liberty than any other country of the world, but real liberty for the common Englishman would come later. America’s struggle for independence was the first step in a series of events that would put England’s noble ideas of liberty to practical use for every Englishman.

Good for us! They probably sent us a nice note later on.

Once the Declaration is taken care of, it's all over but the fighting, and we get a pretty conventional history of the Revolutionary War in both books, mercifully free of both godstuff and conservative axe-grinding for the most part. Land I Love does devotes a full paragraph to George Washington's 1778 proclamation of a "Day of Thanksgiving to God" (Valley Forge gets two paragraphs), and U.S. History has a full-page text box labeling Benedict Arnold "The American Judas," which made us want to go burn down West Point. The section also compares Arnold to another Biblical bad guy: "Like Simon the Sorceror, Arnold was soon 'in the gall of bitterness' (acts 8:23)." We'd actually never heard of Simon the Sorceror, but would totally read a Harry Potter fan fiction about him.

The Totally Best Thing in U.S. History, however, has nothing to do with the book's political agenda, but is merely the result of boneheaded writing and editing: in explaining just how disastrous the war's decisive battle would be for the British General Cornwallis, the textbook says,

"On August 1781, Cornwallis set up his headquarters at a sleepy little tobacco port on Virginia's York River. Little did he realize that Yorktown would be his Waterloo."

Awesome metaphor, guys. The Battle of Waterloo, of course, would not be fought until 24 years later, in 1815. My, my.

Next Week: The Constituion, and how it was assembled from Bible verses.