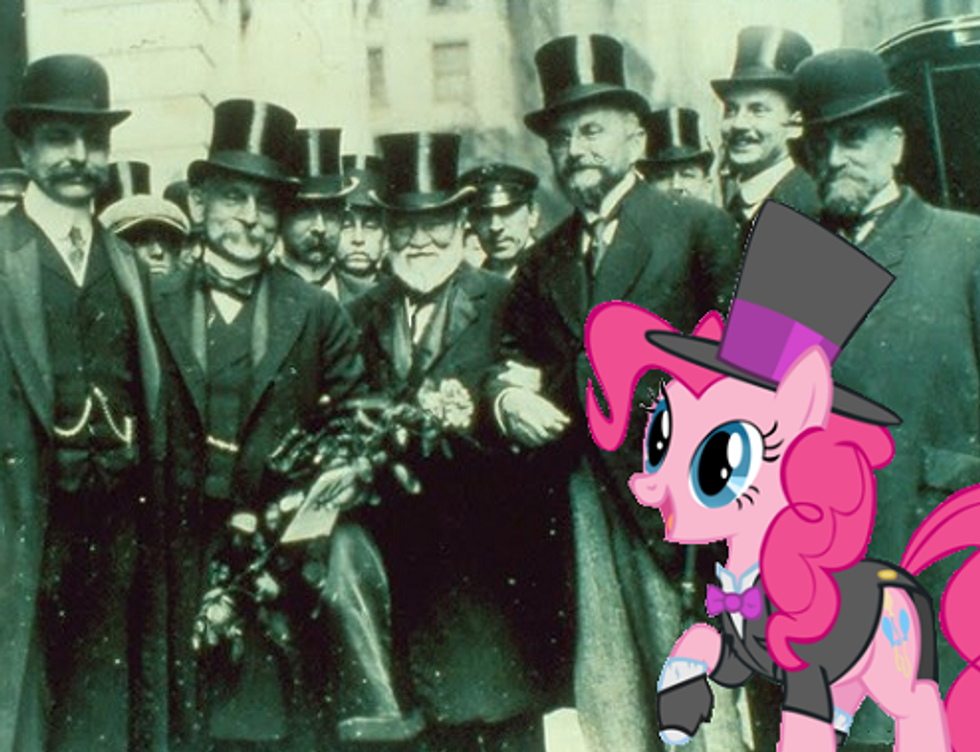 After all the excitement of the Civil War and Reconstruction, it's time for our textbooks for Christian homeschoolers to turn to America's best time ever, the Gilded Age, before all those troublesome unions and Progressives and minorities started causing trouble. For a change, our 8th-grade text from A Beka, America: Land I Love, has the more accurate definition:

The author Mark Twain called the Age of Industry the Gilded Age because when a cheap object is covered with gold paint (gilded) it appears to be worth more than it actually is. Twain felt that the prosperity of the age covered up a great deal of corruption in politics and society.

In his 1873 work The Gilded Age, Mark Twain unwittingly but fittingly named the postwar era. Industrialization put its golden stamp of prosperity on much of society. The rich got richer, and even the poor got less poor.

Twain (and co-author Charles Dudley Warner, who's not mentioned by either book) would have hated to see the novel's ironic title seen as an endorsement of the shallow prosperity of the era's One Percent -- that's just gilt by association.

You will not be astonished to learn that both textbooks are in favor of prosperity. To underline the point, Land I Love follows its chapter on Reconstruction with separate chapters on "The Age Of Industry (1865-1900)" and "The Gilded Age (1865-1900)," so that the marvels of technology and capitalism and the social problems of the era are neatly separated. Land I Love assures us that it was a time of exciting, world-changing inventions and advancements:

This wonderful progress came about through the dedication and labor of American inventors and entrepreneurs working under an economic system that rewarded initiative and hard work. An entrepreneuris one who risks personal loss to develop and market a new product. The wealth produced by new inventions and industries benefited all Americans as it provided jobs, improved the standard of living, and funded charities and public works.

That last bit almost sounds like an endorsement of Big Government, but don't worry, they don't often allow such slips. The chapter is a triumphal list of achievements: Edison, Bell, George Washington Carver, bridges, railroads, and so on. There's a brief mention of Irish and Chinese immigrants who worked on the Transcontinental Railroad, but nothing about the bloody conditions of that work, because what are you, a commie? And of course there are the great entrepreneurs, Andrew Carnegie and John D. Rockefeller (but no love for Cornelius Vanderbilt or J.P. Morgan, for some reason). The term "robber baron" doesn't seem to be mentioned, not even as the unfair slur it obviously was.*

U.S. History is awfully fond of capitalists too -- their section heading on the big guys is "Captains of Industry" -- but they at least acknowledge that these Great Men's "lives often illustrated the best and worst aspects of industrialization."  On the whole, they were good for America, but

For some of them, however, greed for gain and aggressive business practices earned them the less flattering title of "robber barons."

And of course, in assessing the various flaws and sins of the industrialists, U.S. History knows what really matters. It notes that John D. Rockefeller reduced the "chaos" of the free market by "systematically, sometimes deviously, eliminating all competitors" and even makes an approving mention of the Sherman Antitrust Act of 1890. But the text reserves far stronger criticism for Andrew Carnegie, on theological grounds. Where Land I Love approvingly notes Carnegie's philanthropy as "a generous example that would be followed by many Americans who made their fortunes during America's rise to industrial greatness," U.S. History warns that Carnegie's 1889 manifesto The Gospel of Wealth revealed

the influence of evolutionist Charles Darwin on his thinking. The accumulation of wealth, Carnegie believed, simply illustrated the survival of the fittest -- and Carnegie clearly considered himself among "the fittest."

The textbook seems none too happy about his appropriation of the word "gospel," either. While acknowledging his philanthropy, the text suggests that Carnegie's approach is both too Romish and too pagan for good Protestants:

Unfortunately, despite his good works, Carnegie was an avowed unbeliever who scorned the Scriptures. His Gospel of Wealth was a gospel of works. The man who had everything died in spiritual poverty because he had rejected Christ and the only gospel that saves.

Far better to follow the example of the "unbendingly honest" H.J. Heinz, who was apparently the bestest industrialist of them all, because his Christian faith prevented him from enriching himself at the expense of others:

A devout Methodist, he wrote in his will: "l desire to set forth, at the very beginning of this Will, as the most important item in it, a confession of my faith in Jesus Christ as my Saviour."

Although Heinz pioneered much of modern billboard and newspaper advertising, he refused to allow his products to be advertised in Sunday newspapers, because he believed such advertising desecrated the Lord's day.

Since he was devoted to the real Gospels, it's a very good thing that he "gave liberally to Christian works, particularly Sunday school organizations," and not an empty sham. The textbook praises Heinz for his business practices, especially their literal transparency:

Other producers added fillers to their products, such as mixing ground turnips or even wood pulp with their horseradish, and sold their goods in green-tinted bottles to hide the impurities. Heinz insisted on one-hundred-percent pure products, and he sold them in clear bottles so that everyone could see the purity for themselves.

This next bit seems astonishing for a textbook written in the Reagan years:

When the government proposed regulating the quality of packaged foods, other food producers protested this "government interference," but not Heinz. Realizing that he had nothing to fear from regulation and believing that the public had a right to expect the food they bought to be pure, Heinz supported the Pure Food and Drug Act (1906) and helped secure its passage.

A positive role for federal regulation? Shocking! Even stranger is the book's apparent endorsement of what sounds like a recipe for spoiling your workers:

Other business leaders endured strikes and labor unrest. The H. J. Heinz Company never suffered a single strike during Heinz’s lifetime. Heinz intended that his employees should have no reason to strike. He provided them with free medical care; recreation facilities such as gyms, swimming pools, and gardens; and educational opportunities such as libraries and free concerts and lectures. Employees of other companies labored in dark, dirty, noisy factories. Heinz`s workers enjoyed clean, well-lighted, well-ventilated plants where dining halls provided food at discount prices while they were serenaded by the piano or organ.

Considering the rightward tilt of the last decade, and the family-values crowd's demonization of Teresa Heinz in 2004 for her unforgivable slur of Laura Bush (" I don't know that she's ever had a real job" -- Ms. Bush had actually been a teacher and librarian), it would be fascinating to know whether this flattering portrait of her first husband's great-grandfather -- and of capitalism that isn't entirely rapacious -- survived unchanged into the 2012 4th edition of U.S. History. (The sucker's $45 bucks online, and there's not much of a used market yet, so we'll let that go unanswered for now.)

All in all, we learn quite a bit from both texts about the blessings that industry brought to our mighty nation, and if most of the factories were dark, dirty, and noisy, that's not too big a deal because there were some Christian industrialists who were much nicer to their workers.

Next week: The rise of unions, and the dangerous progressives. Also, segregation gets invented somehow.

*Incidentally, if anyone knows of a good history of where the terms "captains of industry" and "robber barons" originated, please mention it in the comments or send Yr Doktor Zoom a note at doktorzoom at Wonkette dot com. Our intuitive (commie) sense is that "captains of industry" was probably coined as a positive counter to "robber barons," but we have no evidence for that at all .