Sundays With The Christianists: American History Textbooks That Defeat The Evil Empire 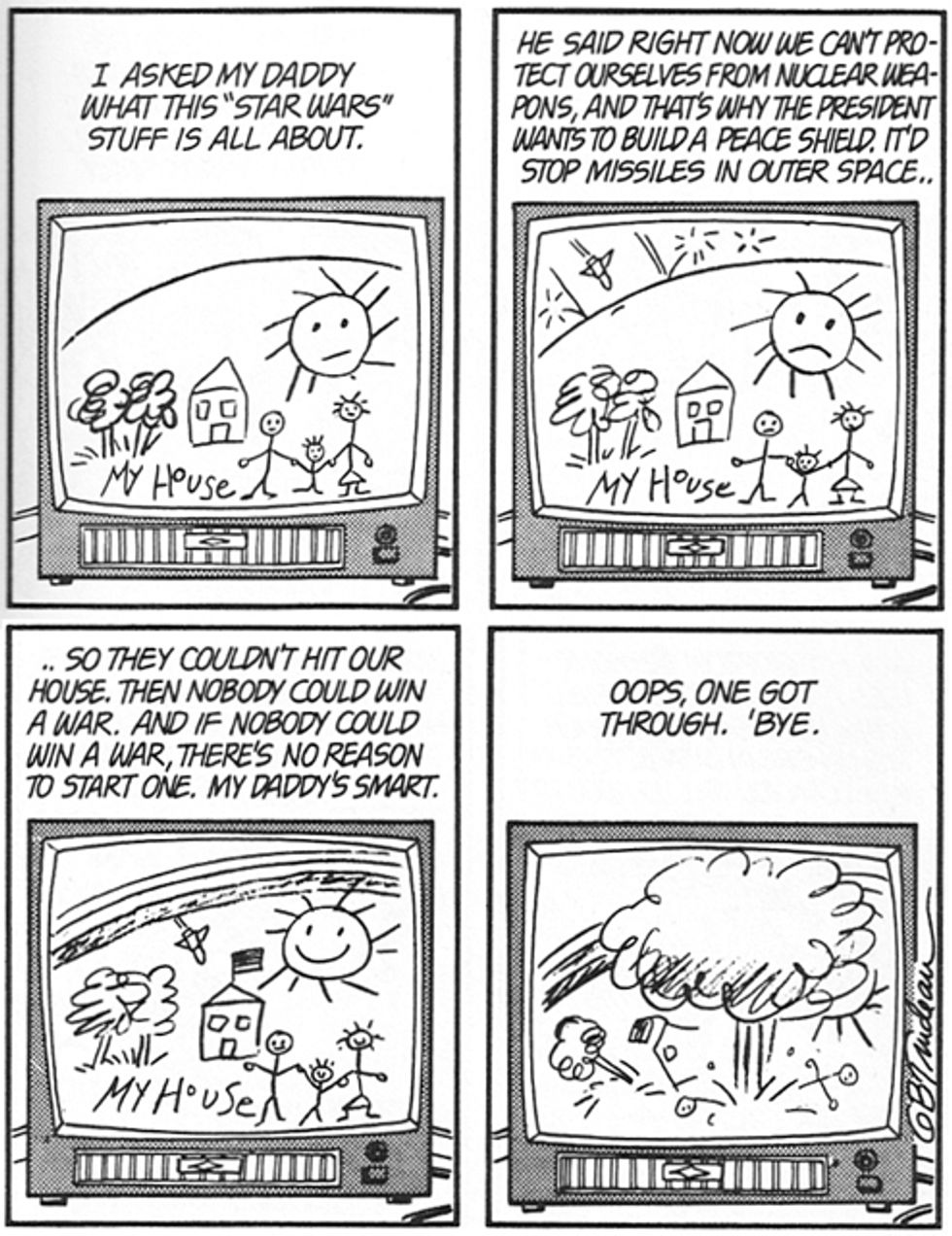 This week's installment will be easy, since all it has to do is explain how Ronald Reagan ended the Cold War by scaring the Godless Rooshians with a laser gun. And lots of deficit spending on the military, but we don't need to talk about that. But Reagan didn't do it alone -- he had help from the moral rot of communism itself, which left the USSR unable to keep up with Reagan's youthful vitality and manly bonerism (OK, on that, we're extrapolating from what's implied in our Christian textbooks).

Our 8th-grade text, America: Land I Love (A Beka, 2006), explains how it worked, and really, it was pretty darned simple:

The Presidency of Ronald Reagan set into motion a chain of historic events. Under his leadership, America strengthened her defenses and pursued research in space-age technology with renewed vigor.

Although the Soviet Union strove desperately to keep up, several obstacles stood in its way. (1) The inefficient system of Communism itself hindered progress because it gave the Communist people little incentive to work hard or improve their skills. (2) The Soviet government spent so much time and resources building weapons that it could not provide basic food, shelter, and clothing for its people, although powerful members of the Communist party enjoyed a high standard of living. (3) The Communists also gave vast amounts of aid to terrorist groups around the world, creating severe financial problems within the Soviet Union. Thus, the "Evil Empire," as Ronald Reagan called it, began to collapse.

And of course, there's no contradiction between 1 and 2 there -- the USSR made everyone lazy by providing them everything, but it spent so much on the military that it couldn't provide everything; also income inequality is bad when it happens in the Soviet Union but not when it's the result of capitalism. And then in 1987, Reagan traveled to West Berlin and shouted at a wall, which eventually made the USSR collapse:

With the ugly concrete blocks and barbed wire of the Berlin Wall behind him, Reagan addressed a crowd of West German citizens. Motioning toward the Wall of Shame behind him, the President issued a challenge to the Communist leader of the Soviet Union Mikhail Gorbachev: "Mr. Gorbachev, open this gate! Mr. Gorbachev, tear down this wall!"

And then it just kind of happened, because the very next section is headed "Frightened Communists." What's beautiful about this bit is that it implies that the Glorious Star Wars Peace Shield actually worked:

Reagan knew that America’s progress in the development of laser weaponry alarmed Gorbachev. The Soviet leader was especially concerned about a program called the Strategic Defense Initiative (SDI), a system of space-age weaponry designed to destroy enemy missile warheads in flight. President Reagan had equipped the American military with technological marvels that the bankrupt Soviet economy could not match.

Heck, it was so advanced that the flourishing American economy couldn't match what Reagan promised, even with hundreds of billions of dollars, so that's really one advanced technological marvel. Land I Love shares the same view of this beautiful ad from 1985, put together by something "The Coalition for the Strategic Defense Initiative":

We were pleasantly surprised to even find this thing online; don't you just love the gentle bubble-popping sounds of the incoming missiles being destroyed? Of course, Garry Trudeau had to go and notice that there might be a flaw in the premise:

But anyway, it totally worked, and so, based mostly on the actions of Ronald Reagan and nothing else (because why would the USSR have its own internal politics?), Gorbachev decided to get his act together:

Desperate to save the Soviet Union from complete collapse, Mikhail Gorbachev agreed (1) to reduce Soviet weapons strength, (2) to free the enslaved nations of Eastern Europe, and (3) to stop encouraging revolution and bloodshed throughout the world. In return, the United States and other free nations promised to help the Soviet Union rebuild its economic and political system on a democratic, free enterprise model -- a plan the Soviets called Perestroika, which means "restructuring." The Communists also adopted a foreign policy known as Glasnost, which means "openness," claiming that they wanted world peace and had no plans to conquer other countries. However, conservatives in the United States noted that Communist terrorists continued to receive Soviet aid on a reduced scale.

We like that definition of "glasnost," which is utterly unrelated to the actual changes that Gorbachev pursued -- it was an internal policy aimed at more open government and freer expression, and didn't involve any foreign policy promises. It's like saying that the Monroe Doctrine promised to free the slaves -- and then adding that many conservatives noted that slavery continued anyway.

Land I Love then closes the chapter with a summary of all the good that Ronald Reagan wrought during his two terms. In addition to appointing conservative justices to the Supreme Court and lower courts, who "began to interpret the Constitution of the United States more in line with the traditional values of the Founding Fathers," Reagan's legacy was, all in all, pretty darned impressive, with three (always three) main achievements that will be on your test:

The President’s buildup of American military defenses aided in the collapse of Soviet Communism, and his support of private enterprise caused an economic boom that further weakened the appeal of Communism around the world. As President, Ronald Reagan represented (1) traditional values, (2) less government regulation of private property, and (3) a return to patriotism and military strength.

Our text for 11/12th-graders, United States History for Christian Schools (Bob Jones University Press, 2002) at least acknowledges that the Soviet Union had its own internal political reality, a little bit:

The Soviet Union went through a procession of dictators during the Reagan years, but it was more like a funeral procession as death took its toll on the old-guard rulers. Leonid Brezhnev died in 1982; his successor Yuri Andropov died in 1984; and his successor Konstantin Chernenko died in 1985. Mikhail Gorbachev took the Kremlin reins in 1985, presenting a new, polished style in contrast with his stodgy predecessors.

Happily there is no mention of the embarrassing press mentions of Raisa Gorbachev as "the next Jackie Kennedy," because come on. U.S. History more accurately presents Glasnost and Perestroika as responses of the USSR to problems of its own making, particularly the drain on the Soviet economy from its occupation of Afghanistan:

In order to make the transition to the Western economic mainstream, Gorbachev urged glasnost, or "openness,” in Soviet society. The Soviet leader believed that loosening some of the shackles of Communist control, allowing greater self-expression, would help motivate the masses to move from a passive to a more active economic role.

Gorbachev spoke of new ideas, however, while mostly clinging to the old ones. The practice of perestroika turned out to be a series of half-measures that raised Soviet expectations rather than the standard of living. Yet in contrast to the slow progress of perestroika, glasnost was perhaps too successful from Gorbachev’s point of view. The taste of freedom only awakened a thirst for more, as nationalism replaced Marxism. The diverse ethnic groups of the Soviet Empire, bound together by a Marxist philosophy that in both theory and practice was now an official failure, called for greater freedom from Kremlin control. Gorbachev and the Red Army responded to these stirrings of independence and nationalism with tear gas and bullets. Glasnost was even more successful on the fringes of the Iron Curtain as, one by one, Communist governments were ousted in Central Europe in 1989, and a Germany divided since World War II was united in 1990.

Weird -- U.S. History doesn't even mention Reagan's speech at the Berlin Wall, which made all that stuff happen. We hope that Bob Jones U has investigated the loyalties of the persons responsible for that oversight.

In U.S. History, Ronald Reagan is still a great leader, of course, but he's less of a superhero -- the book even chides him, gently, for believing that Reds can be trusted in nuclear arms talks:

Despite the fact that the Soviets had consistently cheated on previous arms agreements, Reagan placed a new-found faith in the power of treaties to correct Soviet behavior. At the Washington Summit in 1987, Reagan and Gorbachev signed the Intermediate Nuclear Forces (INF) Treaty, which eliminated most medium-range missiles from Europe. Events in Eastern Europe, though, soon lessened the importance of the INF Treaty. Nonetheless, with leaders eager to show progress, the superpowers’ agreement was heralded as a symbol of friendlier relations.

Not mentioned, of course, was the influence on Reagan of The Day After, the TV movie about the immediate aftermath of a nuclear war, on Reagan's thinking, because Godless Hollywood only ruins America -- it couldn't possibly have left Reagan so shaken that he wrote in his diary that the movie was "very effective & left me greatly depressed.”

In any case, Reagan was still committed to big ideas like SDI, which U.S. History almost comes close to admitting never actually worked, but nonetheless credits with helping to win the Cold War:

Although SDI was many years, many billions of dollars, and not a few technological hurdles away from reality, the program seriously affected the nuclear arms equation. Gorbachev knew that SDI would force the Soviet Union to develop its own defense shield -- a long and costly endeavor. With the Soviet economy on the verge of collapse, SDI development strengthened Reagan’s bargaining position, and by the early 1990s more down-to—earth problems such as empty store shelves would further weaken Gorbachev’s position.

The chapter closes with two text boxes, one listing the European countries that fell out of the Soviet orbit, and another quoting a 1990 Reagan speech about the "reverse domino effect" as the Evil Empire fell apart, and confidently predicting that Cuba would be the next communist country to embrace democracy. There's also a brief discussion of the 1988 presidential election, assaying that the election of George H.W. Bush and The Little Prick "was in many ways a final vote of approval for Ronald Reagan," which is actually pretty accurate; Land I Love, clearly not enamored of the 41st President, merely gives the names of the candidates and the outcome, noting that Bush "promised to continue the direction that Reagan had begun." And then in the next section we learn why they're not so crazy about that Bush fellow: He was too soft on Communist China.

Follow Doktor Zoom on Twitter. He did not start listening to the Ramones until the 90s, and confesses to being a total punk fake.