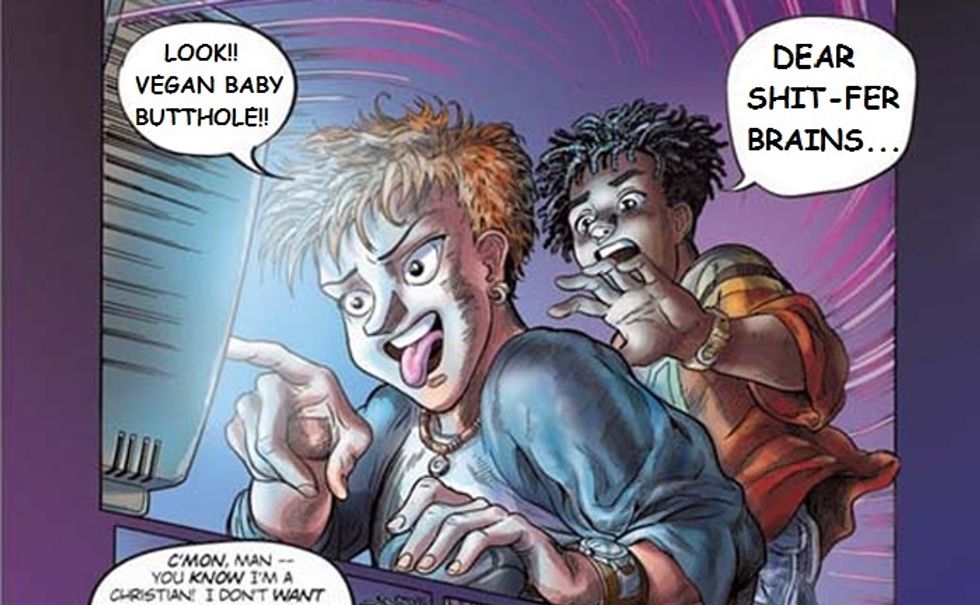 No vegan baby butthole for you, young man!

The comics are all penned by Rev. Todd, with art by some anonymous person who may well have wanted it that way. Todd has high hopes for his crappy comics: he wants nothing less than to "bring the message of the Gospel to America’s youth and counter the ill effect of the liberal agenda being promoted aggressively in America’s public schools," by getting as many copies of his crappy comix to America's youth as possible. Since the comics look like the Japanese mangas the kids are all into these days, they're certain to appeal to all the youngsters, or at least the ones who aren't too critical. Also, the back cover has all sorts of important information about how the evil secularist schools cannot take away your Bible, so you can be properly confrontational about it.

Our example today, "Parental Controls," is all about the perils of pornography, and why even a single glance at nekkid human bodies can lead you into a life of lust, depravity, and possibly even voting for Democrats. You can read the whole sorry mess here. Let's meet our protagonists, Marty and Jesse, as Marty tries to lead Jesse into temptation:

Is Jack Chick In Hell?

Jack Chick is up in heaven now, with Isaac Asimov and Kurt Vonnegut.

Check out Dad's necklace and that pencil-thin mustache -- as in any good didactic comic, you just need one look to know he's sleazy. But wait -- jail? Oh, sure, Marty explains nonchalantly -- dear old Dad has been arrested for being with a 16-year old girl, but he only had to stay in jail overnight, and another time he was accused of date rape, but beat that rap, too (no doubt because of lenient liberal judges, although the comic doesn't say). Also, he's had two failed marriages, and never has any luck with women, either, Marty trails off, on the verge of awareness of the Horrible Effects Of Porn On Men. But he quickly goes back to the sex computer, telling Jesse, "You'll like this page, Bible-Boy! It's called 'Eve's Garden of Eden Girlies!'"

But let's just pause a minute for the best damn drawing in the comic: Clearly frustrated by the banality of the whole project, the unnamed artist decided to at least make the snake interesting to look at. Dang ol' snake is far more engaging than frizzy-haired Veronica there:

Jesse tries again, with the story of David and Bathsheba as an example of how lust can Ruin Your Life, but Marty remains clueless, exclaiming that he typed "Bathsheba" into an "X-rated search engine" and found a site called "Bathsheba's Bad Bathing Babes" (sadly, the only results we got searching for "Bathsheba's Bad Bathing Babes" were reviews of this comic. But we weren't using one of those X-rated search engines). Jesse has had it with Marty's refusal to take these Bible stories serious, and shouts, "Marty! This is serious! (* Galatians 5:19, 21)" Well heck, we had to check that out:

It's true -- if you fill your head and heart with garbage like these comics, the consequences could be dire, and lifelong. Even worse, you could read Ayn Rand and become a real jerk, or worse, a Republican senator.

Marty has had enough of Jesse's "whiny preaching," which makes him all the more sympathetic, though nowhere near as lovable as that snake a couple pages back. He throws Jesse out, and we have to say the dialogue here is a truly impressive reflection of how teenaged boys actually talk:

Ah, but at that very moment, Marty's dad stumbles in the door, fresh from more porn-induced sexual assaulting, just like every man who ever looks at nekkid ladies:

As Mr. Hugh Flintner (that's not even a pun -- talk about disappointing) heads into the house, carrying a six-pack of beer and muttering "All women are worthless," Jesse makes his way home, deeply troubled by what a terrible date night this has been for everyone and hoping his parents are still up. It is probably about 8:30, after all.

Fortunately, they're awake, though in their jammies -- lucky thing Jesse didn't walk in on them trying to become more Quiverfull -- and they're there to give Jesse the Parental Guidance he needs. Dad explains, "Marty's involvement with pornography is just a symptom, Jesse --" but before he can explain what dread disease Marty suffers from (demonic possession, onanism, or maybe dropsy), Mom breaks in: "That's right! He needs Jesus!" But is Jesus really enough? Jesse's not sure! He admits he knows kids who say they're Christian, but are also "secretly hooked on pornography, too -- they're just ashamed to admit it!" Thank goodness his parents have the answers, complete with footnotes:

Just look at how excited and relieved they are to find all those terrific Bible verses to help their son stop touching himself -- surely now, with a strict fundamentalist upbringing, he will respect and honor women every bit as much as Jimmy Swaggart, Jim Bakker, Todd Akin, and that great big fan of the Bible, Donald Trump.

Also, we should mention that this is actually the second edition of "Parental Controls;" while we were researching this post (yes, we do research. How else are we going to steal jokes or let you, the reader, know whether there's an "Eve's Garden of Eden Girlies" out there? [There isn't, sadface :( ]), we came across this earlier version of the comic's first page, and just look at the major change they made when they ran it through the Mangarizor:

Believe it or not, we came across that at a 2002 thread on wingnut hub Free Republic; several people actually thought it was indeed a crappy comic, although once someone brought up Chick tracts and evolution, the thread devolved into 361 pages of arguments about why evolution is a dirty satanic lie that no real scientists accept anymore. Also, the Freepers were disgusted when someone said making the father and son team of sicko, woman-abusing, sexual-assaulting porn addicts black was somehow racist, because in today's sick Politically Correct media, everyone is too damn touchy. Excellent point -- there is nothing at all objectionable about the original version of Marty's dad:

We think he's supposed to be salaciously winking (the manga version of dad is), or maybe he lost an eye in a knife fight, as Those People do.

Have yourselves a lovely Sunday, Wonkers, and please try to stay pure for a while, will you? Also, whaddya want next time our Deleted Comments are too lame to bother doing a Shitferbrains: a comic about the dangers of Ouija boards, or one about how The Gays are definitely not "Born That Way"?

Yr Wonkette is supported by reader donations. Click the "Donate" clicky and maybe we can find some nice crazy-ass Christianist textbooks for you!