Sundays With The Christianists: Marx Was Wrong Because Jesus Loved Inequality 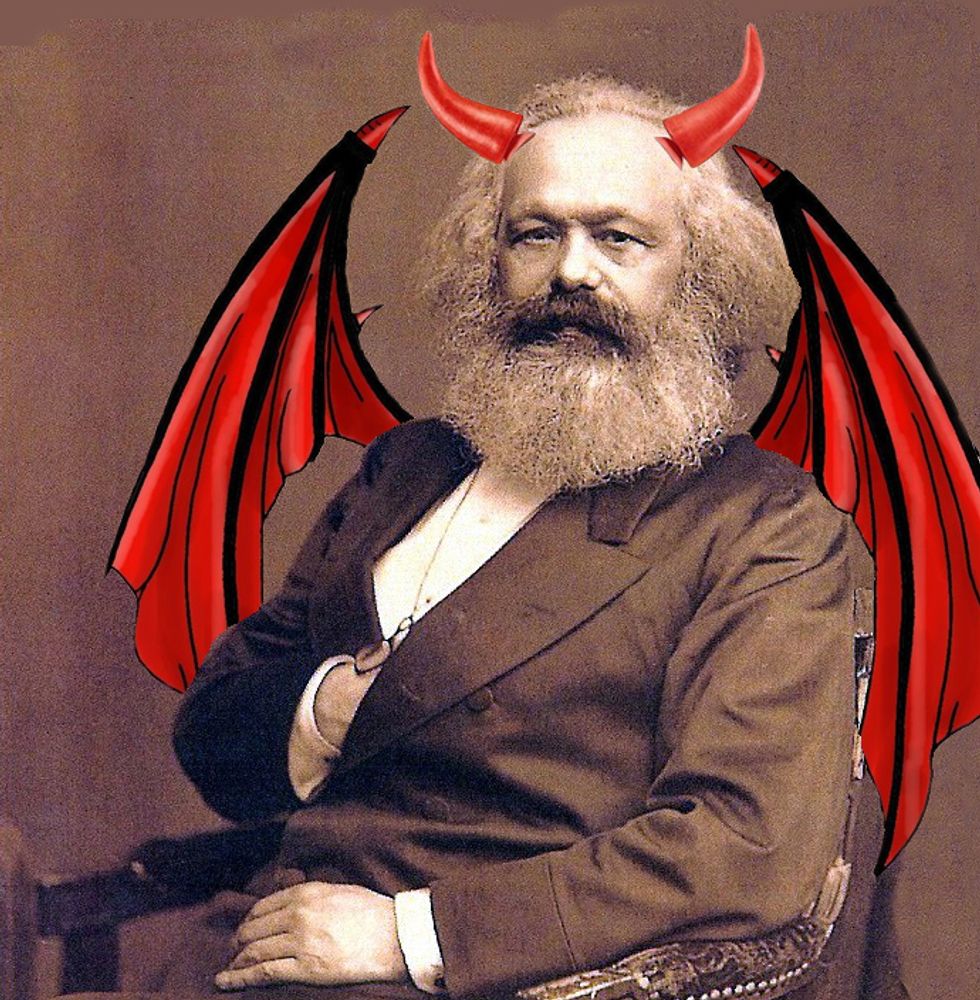 Happy Dia De Los Muertos, all you Wonkees! Grab a candy skull and let's commune with the spirits of the departed, which of course probably sounds like consorting with demons to our favorite deranged Christianist, Colorado radio preacher Kevin Swanson.

For the past few weeks, we've been slogging through his premature autopsy of Western Culture, Apostate: The Men Who Destroyed the Christian West, the thesis of which is simple: Things have been going downhill ever since roughly the 10th century, when non-Christian philosophy started polluting European Christianity, and it's about time we chucked all that evil secular thought and got back to the Bible. But we can keep the science and technology, sure, now that we have it.

Why bother examining the rants of a third-rate Colorado radio preacher who thinks that The Pill leaves ladies' wombs studded with tiny dead babies that are eating their innards? Mostly because it's fun, but also because Swanson is sort of a big deal in the Christian homeschooling movement. When he bloviates, at least some people listen.

Last week, we began learning about Karl Marx, who Swanson is pretty sure had direct contact with demons, since several of the plays and poems Marx wrote in his twenties sounded distinctly Satanic -- they openly rejected God's authority, just like You Know Who. This week, we'll finish with Marx and his demonic agenda, which Swanson doesn't exaggerate one single bit.

The main thing you need to know about Marx, says Swanson, is that "From the beginning, Karl Marx’s agenda was destruction, which is characteristic of all demonic agendas (1 Pet. 5: 8)." And unlike a lot of other philosophers who helped to destroy Christianity, says Swanson, Marx didn't even pretend to hide his agenda:

A host of philosophers have planted the seeds of destruction in social, economic, cultural, and education systems, but not many will admit to purposefully working a destructive agenda. Only Karl Marx was self-conscious and honest and purposeful enough to profess his intentions to the world! He fully intended to destroy mankind and to consign the whole world to hell.

Oh, sure, there's nothing in Marx's writing where he actually says, "Golly, I am sure looking forward to consigning the whole world to hell," but you can totally tell from those plays and poems where he talked about overthrowing God. No way was that a metaphor, man.

The other really important thing you need to know about Marx is that he was a monster in his personal life, according to Swanson's caricature of a biographical sketch:

As would be expected , Karl Marx’s life was a disaster. He had seven children by his wife, Jenny. Continuing in the shameful tradition of Descartes and Rousseau, he produced a child out of wedlock with his house maid, Helene Demuth. Eleanor, his favorite daughter, married Edward Aveling, a Satanist known for his blasphemous lectures on “The Wickedness of God” and for his poems to Satan. If that wasn’t horrible enough, Marx starved three of his children to death, five of his children died prematurely, and the two daughters who outlived him committed suicide. Thus ends the miserable, tragic life of Karl Marx.

We especially love that "starved three of his children to death," which, if a dead person could sue for libel, would probably be actionable. As a corrective to this horrible paragraph, we'd suggest Mary Gabriel's biography of Karl and Jenny Marx, Love and Capital, which discusses the conditions of the Marx family's life in London in great detail. Quite simply, they were dirt poor and lived in a slum, with the attendant health effects common to the poor in that environment: one baby, unnamed, lived only a day (so presumably she was not among those Marx "starved"); two others didn't make it to the age of two (the family couldn't even afford a coffin for one of them); and Marx's son Edgar, nicknamed "Mush," died at the age of 8 after a long illness. All the deaths left both parents heartbroken. Or, in summary, Marx starved them to death (as far as we can tell, the fifth "premature" death would have to be Jenny Caroline, who died at 38 of bladder cancer, no doubt brought on by communism). Marx was constantly in debt and relied on Friedrich Engels for any number of loans while he wrote. Obviously, if he'd been a better person, he would have gotten honest work, and his children would have lived, because no children of virtuous people ever died in poverty in Victorian London.

Swanson explains that the "character trait most carefully honed in the life of Karl Marx was surely hatred," which almost magically carried itself over into the hearts of those who led genocidal regimes based on Marx's ideas, according to yet another passage Swanson cribs from Paul Johnson's book Intellectuals:

He was never in a position to carry out large-scale revolution, violent, or otherwise, and his pent-up rage therefore passed into his books, which always have a tone of intransigence and extremism. Many passages give the impression that they have actually been written in a state of fury. In due course, Lenin, Stalin, and Mao Tse Tung practiced, on an enormous scale, the violence which Marx felt in his heart and which his works exude.

The rest of the chapter is an examination of why Marx's economic ideas are anti-Biblical, which is pretty much what you'd expect, so we'll just leave it alone, except for one seriously strange interpretation of a parable from the Bible. Swanson says Marx's focus on economic inequality is wrong from the get-go, because in fact Jesus is perfectly fine with inequality:

Instead of dealing with the sin of covetousness, Karl Marx makes the problem worse by institutionalizing envy and redistributing wealth in an effort to address this new “sin” of economic inequality. However, the Bible does not condemn inequality in pay scales, even for people doing the same work (Matt. 20: 1-15). In his parable, Jesus insists that a landholder should be able to pay his workers whatever he would like to pay them, as long as the employees agree to it at the outset of the work. An inequality in pay scale does not amount to inequity or injustice, according to the law of God. Moreover, the same passage in Matthew 20 actually condemns the envying of those who received more money than the others (vs. 15). Elsewhere in Scripture we find the law of God specifically forbidding the redistribution of the wealth.

Matthew 20: 1-16, just in case you skipped your Bible reading this morning, is the parable of the vineyard workers, in which a landowner hires some workers in the early morning for one denarius per day, then keeps going back to the front of Home Depot to pick up more laborers in his Dodge Ram flatbed, promising all of them the same wage, one denarius. When the first hired complain that they worked a lot harder than the guys hired in the late afternoon, the rich guy says, hey, you agreed to the wages at the beginning, it's my money, I can do as I want. The parable is usually taken as a story of God's grace -- no matter when in life you get saved, you still get to enjoy Heaven just as much as anyone else, an interpretation that is helped along by Jesus saying at the start, "For the kingdom of heaven is like a landowner who..." But for Swanson, that's not a metaphor. It's just plain solid economic policy: The guy with the gold makes the rules, however capricious, and God wants it that way, so calls for equality (and probably the minimum wage) are totally offensive to God.

Most important for Swanson's purposes is the fact that since Marx advocated public education, all public education is therefore Marxist. There are a whole bunch of Bible verses about the responsibility of the family for education, and Marx knew that, so to destroy the family, it was necessary to turn the job of teaching children over to the state:

For thousands of years, education was considered the responsibility of families, churches, and small communities, and was carried out under their direction. Karl Marx now perceives that the nuclear family and its commitment to direct the education and upbringing of children is the one major impediment to the all-consuming state. Thus, home education is the core concern of the Marxists and would remain the core battle for succeeding centuries. With the abolishment of home education, family bonds would gradually weaken and the state would assume a more dominant role, generation by generation.

And by golly, that's exactly how things turned out! And just look at the suspicious timing:

In 1852, Massachusetts became the first state in America to pass a compulsory school attendance law, just four years after the publication of the Communist Manifesto. By 1918, all fifty states had incorporated compulsory attendance laws; the tenth plank of the Communist Manifesto was now well established in the United States of America. There are currently 50 million students enrolled in public schools in this country at a per-student cost of $11,467 per year. It has become almost impossible to oppose the $600 billion public school monopoly in the face of the growing, totalitarian state in this country.

(Update: As willi0000000 points out in comments -- which we don't allow -- in 1918 there were only 48 states, but damned if all fifty of 'em didn't mandate public schools. That's just how pervasive Marx's influence was.) Swanson loves to attribute all sorts of nastiness to Marx. He's also sympathetic to neo-Confederates who say Lincoln was a commie. Needless to say, Swanson doesn't see any other possible reason that an increasingly technological, urban culture might institute public schools. Marx called for them, and they are therefore, of necessity, Marxist. It's really so obvious once you look at it. Now go starve your children, comrades.

Next Week: Charles Darwin personally makes everyone an atheist.