Sundays With The Christianists: Sex Education For Godly Virgins Who Intend To Stay That Way 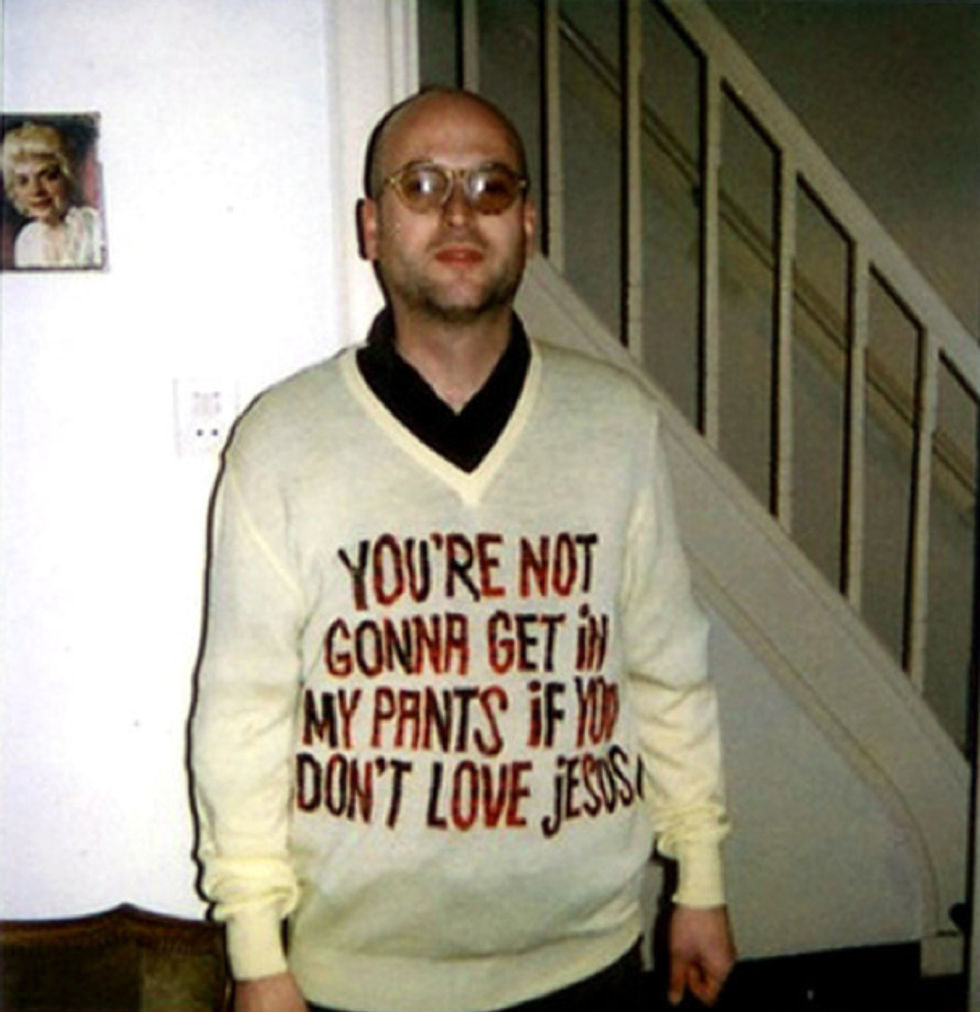 OK, you harlots and fornicators, let's get something clear right off the bat. This column's examination ofChristianist sex education books is a serious look at the cultural attitudes of the Religious Right, not just an excuse to snicker at the crazy fulminations of the late Hugh F. Pyle of Panama City Florida, the author of Sex, Love, & Romance: Sex Education from the Bible.

Now that we've made that clear, Dr. Pyle needs to have a serious talk with you about dancing: "It is impossible to separate sex and the dance; to a greater or lesser degree they go together." What's more, dancing is just not something that good Christian boys and girls should do!

Pagan natives around heathen campfires often drink and dance until they become so aroused that they take off their clothes. Things haven’t changed much in the dance of modern times. Young people dance in such a lewd and provocative manner that the flesh (sex lust) is aroused. They sway and writhe in front of each other in lustful movements. Many times they have very little clothing on, or the clothing is so tight that it is suggestive and revealing. Rock stars have often been arrested for exposing themselves in a shameful manner while performing their heathen rituals with dirty lyrics and movements that are vile and lewd.

It's really surprising how often Dr. Pyle contrasts ideal Christian behavior to that of "pagan natives." In addition to all that filthy dancing, these ignorant heathens are invoked when it comes to make-up ("Heathen natives around pagan campfires usually streak their faces with gaudy paint" -- there's a certain familiarity to that phrasing, no?) and of course, to the very important issue of never being unnecessarily naked:

in backward countries, the more pagan the heathen tribe the less clothing they usually wear. Missionaries tell us that as soon as these pagans get saved, they want to cover up their nakedness -- they look for some clothing to put on. It may take awhile to teach them just how to dress and how much to cover up, but they soon learn.

But yes, back to the dancing. Pyle informs us that "The dance and sex have always gone together," and tells an approving story of how the "good Christian men" of one city came together to combat the evils of the high school prom, by convincing school officials to

have a fine banquet with clean entertainment for the high school youth who didn’t dance. For years this was done. These businessmen who had been saved in later years all testified that they had tasted liquor and raw sex for the first time at the annual high school prom.

And goodness golly, Pyle certainly lingers on the potential for sin that comes with dancing:

The embrace of the dance, the closeness of the bodies (or the constant twisting, shaking, and writhing of the bodies) cannot but arouse a person and the dancing partner. The body’s response to this type of physical stimulus is normal -- but not designed to occur outside the marriage relationship.

Whew! We believe we will just have to step into the other room for a refreshing glass of lemonade after all that excitement! But this dancing is seriously dangerous stuff, as seen in a couple of random Bible passages that are unabiguous in their condemnation of dancing:

All in all, you'd be much better off just staying home and reading your Bible. There are just so many risks associated with all that gyrating and writhing (We'll grant Pyle this much: he at least refrains from invoking "jungle rythms" -- at least in the 1989 edition):

Dancing is worldly; it is sensual, suggestive, and arouses beastly appetites. It is almost always associated with drinking (often drugs) and a profane and corrupt atmosphere where the music is wild and Satanic. That should not only reveal to the honest Christian that dancing is off-limits to the believer, but should show the definite relationship the Bible teaches about dancing and sex.

God probably isn't all that fond of eating, either, seeing as how it is so frequently associated with drinking and with the smoking of those funny marihuana cigarettes.

We should probably also note that this chapter on dancing is in a thematic section headed "The Scarlet Sin," which deals with all sorts of other horrors: fornication and adultery; sexually transmitted diseases; "the nakedness question" -- God's against it, in general; prostitution -- Pyle prefers to call it "whoredom," of course; and pornography. And frankly, Pyle's proclamations against nonmarital fucking are ultimately not all that different in tone from his fears about the consequences of simple nakedness, or even near-nakedness:

God has a lot to say about nakedness. In Leviticus 18, the whole chapter deals with nakedness. He emphasizes again and again the danger of being careless about covering up. He plainly declares that we are not to uncover the nakedness of "any that is near of kin." So we are not to run around the house naked nor become immodest in other ways, even around our own family members and relatives.

Yes, Hugh Pyle is a never-nude.

He also firmly rejects that newfangled feminist nonsense about women being able to dress as they please without fear of what men will do when they parade around like harlots:

Christian girls and women should be careful not to dress in sensually provocative clothes (such as shorts, miniskirts, long-slit or open skirts, low-neck dresses, skimpy bathing suits, etc.) when they are around other people, for they thus bring shame and criticism to the Christian cause. They may also cause men to lust after them with evil thoughts. Many a woman or girl who has been assaulted [raped] or beaten and abused by some evil man has at least been partly to blame if she was dressed in such an immodest way as to cause temptation.

We're betting that Dr. Pyle just had oodles of fans at the Panama City Women's Shelter.

Still, he does have some practical advice for girls so that their dirtypillows won't cause a scandal at the beach:

she can wear a robe to the water’s edge to swim and then cover up properly when coming out of the water. If possible, go to a secluded spot on the ocean, gulf, or lake, and swim with just your own family; even then we should be modest. The family that has their own pool has another solution. Many good Christian camps have separate swim periods for boys and girls for these reasons.

Thank heavens! We would hate to think that a nice Christian family might go for a refreshing swim, only to have a frenzy of dancing break out.

Next Week: More filthy dating advice, and why Jesus doesn't want you to marry a pagan (Beyond the campfires and the dancing, and of course the engorgement).