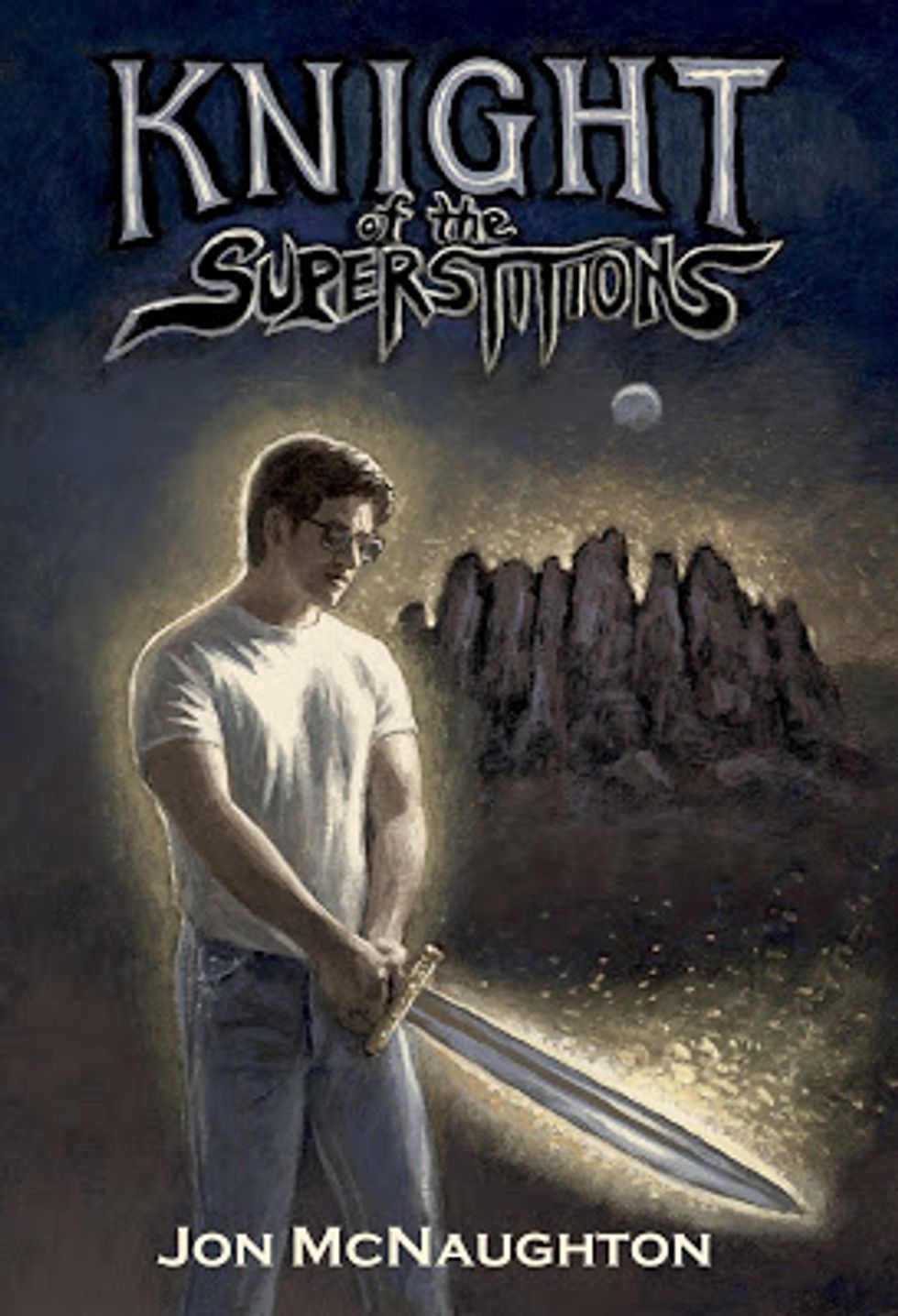 Update, 5/1/2019: Jon McNaughton's embarrassingly bad self-published novel is no longer available on Amazon. We may be mistaken, but we believe this two-part review is now the only detailed record of its existence. World culture may somehow survive the loss.

We're going to take a short break from our American history textbooks for homeschoolers, because Alert Reader "Blanche" tipped us off to a self-published booklike object that we somehow missed when it splashed into the internet in late July: Great American Artist Jon McNaughton has written a novel that does for Teen Fiction what Christian Rock did for music. McNaughton took a little time away from painting Patriotic Classics like "Jesus Hands Washington the Constitution," "Obama Burns the Constitution," and "Bro Shames Democrat Preznits By Holding Up The Magically Unburnt Constitution," so he could write a book. A book for young people, full of magic and imagination and wonder, with all the subtlety of McNaughton's art. It is called Knight of the Superstitions, and it is easily the equal of the "Harry Potter" books, in that it contains words and can be purchased as an e-book. It's getting rave reader reviews* on Amazon, which means that a whole bunch of homeschooled teens are going to have it dumped on them, poor things. We read it so you won't have to.

McNaughton's introduction [archive link] gives you a taste of what you're in for:

I had been thinking for some time about writing an autobiography for my children and posterity to try and document the many outrageous and incredible experiences I have had throughout my life ... This story was just too good to keep to myself. My life has been a fantasy/science fiction novel with a twist.

McNaughton promises a tale that will show us "the unseen Spirit World around us," which turns out to be a lot more boring than you might think: people have auras ("halos" actually, since "aura" is far too New-Agey and pagan) in different colors, like mood rings. There's even a color chart, which you'll want to bookmark for easy reference. McNaughton challenges the reader to "try to decide where you think the truth ends and the fiction begins," and we're pretty sure we managed to do it! We're guessing that the stuff about being a football player in 1984 in Mesa, Arizona is true, as is the stuff about learning to paint. The rest is hooey, and the whole thing reads like New Testament fanfic written by an earnest college freshman.

McNaughton also has this very important note about the book's language:

As you read, you may see some symbols that are unique to my writing. If you see ////////// this means that I felt the text was too sacred to include on these pages. If you see XXXXXXXXXXX it means I chose to leave out the bad language. (I don't want my kids thinking their Dad writes bad words, you know.)

And indeed, one passage of the book contains a prayer that is so sacred that it's just a couple of paragraphs of "//////." Stirring stuff, and no XXXXX about it.

McNaughton's protagonist is 16-year-old Josh Knight, although he might as well be named Mary Sue McAuthorStandIn. We meet him on his first day of public high school, where he's starting 11th grade. He's kind of like a teen version of the Claymation boy from Davey and Goliath, only without the charisma. Josh has been homeschooled up to this point, although his dad has been the head football coach at Westwood High for years. His dad is named only "Coach." Coach has this manly advice for Josh: “Remember to keep your sternum up and always remember who you are." Is this an actual phrase that people use? And by golly, Josh does indeed keep his sternum up, and we hear about it several more times throughout the book:

“Just keep moving," he thought as he walked with his sternum up... “

My name is Josh," he said with his sternum up.

Josh walked through the front doors, his sternum was up and his crooked smile began to shine.

Josh walked tall and confident, with his sternum up, as he went to his locker.

This isn't a novel; it's Posture Pals with a plot about angels and demons.

Oh, and that angel: Josh gets his very own personal art tutor and spiritual guide, an angel named Nathaniel who — oh this is wacky! — looks like an leathery old surfer dude, wears loud Hawaiian shirts and drives a "red Thunderbird Classic."** Not only does he walk Josh through his spiritual journey, such as it is, he is also the novel's comic relief. He shops at Angelmart -- get it?? His car's radio picks up only music from Heaven, with perfectly harmonious tunes:

“Wow, that makes rock and roll sound like nothing," said Josh as he sat overwhelmed in the front seat. “What group is this?" “That. [sic] my friend, is Cherubim and the Flaming Swords; do you like them?"

As cool angels go, Nathaniel is several notches down from Clarence in It's a Wonderful Life.

Nathaniel teaches Josh how to bind dark spirits with cords of light and banish them to the moon, and to call down angels to drag demons off to the Eternal Prison. This constitutes most of the "action" and "adventure" in the novel, again and again. Multiple set-pieces go like this: Josh wakes in the middle of the night, sees an unholy presence of some sort, and calls on God to help him banish the Evil Thingy. Then he goes into another room and does it again, only maybe the Evil Thingy is a gargoyle this time. And then another room. And then, God help us, the friggin' dog house. At one point he has to Cleanse his parents' room, and there's the brief hope he might walk in on them XXXXing, but no such luck, just more Summon and Banish. He thinks he's cleared out the baddies from his older brother's room, but God tells him to check under the bed, where there are two

"Spirits of Lust, very evil female spirits. They cannot be allowed to be entertained for even a second. They must be shackled and chained and sent away quickly. They are almost as evil as vampires."

Summon, banish. And presumably big brother loses his erection and dreams about Jesus instead.

Elsewhere in the novel, there's a football game (state championship, of course) that Josh and his pals almost lose because the other team — the "Tempe Red Devils" (you'll never guess what Phoenix-area college team they're supposed to be!) — is literally assisted by demons, who cheat and blind the refs and trip the players on Josh's team (the Warriors, of course). But then at halftime, Josh's dad leads the team in prayer and Josh calls in a bunch of angels to block. You will never ever guess who wins!

McNaughton can't even make the final confrontation with Satan himself particularly interesting. The Prince of Lies offers Josh a pile of gold and gems from Scrooge McDuck's vault if Josh will help convince people to worship him. Spoiler Alert: Josh refuses to go to the dark side, cookies be damned:

"No soul shall hunger under my rule. Nobody will be without. And I will make them all obey me so that the whole world will be saved."

“That sounds like Socialism to me, Satan. Under your plan, we all suffer together. That is why you have been a liar from the beginning. Leave me, Satan, I will not follow you." Josh held up his bright sword as his light shown around him.

“You will worship me!" growled the dark man as he paced beside the circle ...

“I am a Son of the Light," cried Josh holding his sword in the air. “I will only serve the Almighty God of Heaven!"

Upon those words, a powerful blast of light exploded from the circle surrounding Josh and the Dark Creatures of the other Realm retreated until nothing was left except a small dark spot in the sky.

Also, Josh Gets the Girl, but they agree that until they graduate from high school they'll only hold hands and kiss each other on the cheek. He finds gold and God in the Superstition Mountains. He gets to keep the car. He finds out about his Heavenly Destiny. But first, he has to defeat the most fearsome enemies of all: the liberal teachers at his high school. But that's going to have to wait for next week: Josh Knight's political rants really do deserve a post of their own.

We are hesitant to recommend Knight of the Superstitions, even for the lulz. Where some bad movies or writing — like Troll 2 or My Immortal — are so bad they're good, this is just so bad that it's terrible. This is the Star Wars Holiday Special of Christian Youth Fiction — it's just so grimly awful that the so-dumb-they're-funny moments are barely worth wading through the rest of the swamp to find. We'll say this much for Jon McNaughton: with this novel, he's found a way to make his art look pretty darn competent.

More next week and until then, keep your sternums up, people. (Here's Part 2!)

* Reviews that were no doubt helped along by the little "win some art" contest [archive link] McNaughton used to get people to review the book when it was first published in late July.

** This is the worst sort of nitpicking, but we're never told what year it is. It can't be the first-generation T-Bird (1955-57), which most people would be inclined to think of as the "classic," since Josh goes on a double date in it, and the Thunderbird didn't get a rear seat until 1958, another atrocity we can thank Robert McNamara for.

Knight of the Superstitions, by Jon McNaughton. Self-published for Kindle, e-book only. $7.95, approx. 318 pages.