Sundays With The Christianists: U.S. History Textbooks On The Advent Of Saint Reagan 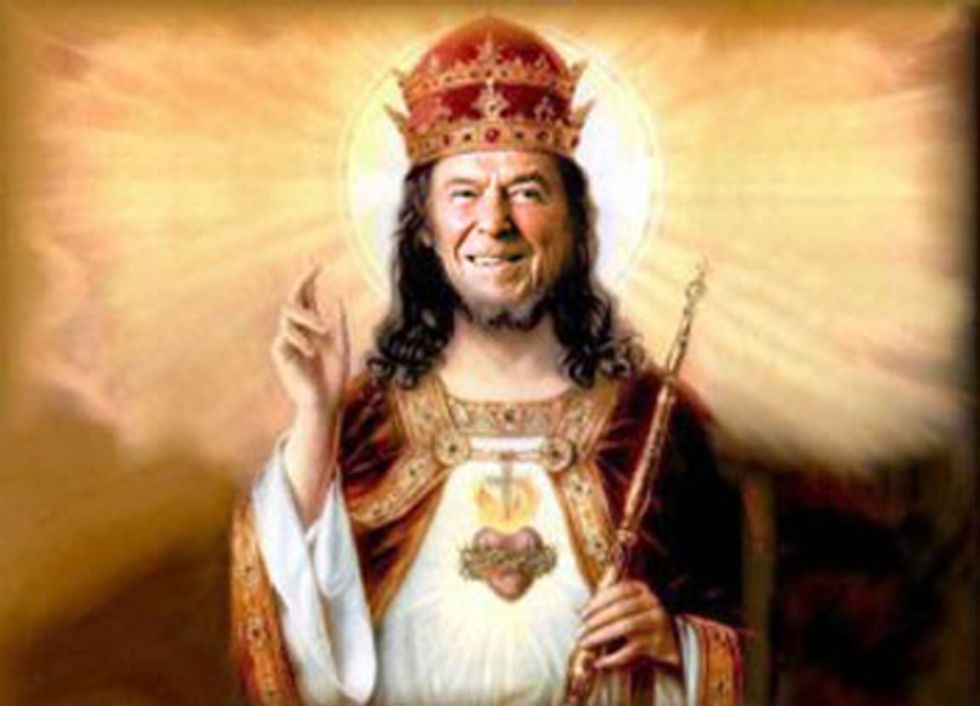 Congratulations, America! After 400 years of divine guidance, we've finally gotten to the President that God wanted the most, Ronald Wilson Reagan (genuflection optional). Both of our textbooks for the Christian school market just love the heck out of him, of course, because he made America Great Again... or at least made usfeel Great Again, which is every bit as important.

Americans approached the Presidential elections of 1980 feeling that something had to be done to restore the United States' image at home and abroad. The hostages were still being held in Iran, and Communism was spreading throughout the world, especially in Latin America. Burdened by heavy taxation and welfare spending, the country suffered from rampant inflation and economic recession. President Carter had failed both in foreign and domestic affairs, and the nation was ready for a change.

Our other textbook, the 11/12th grade United States History for Christian Schools (Bob Jones University Press, 2001), is at least a bit more specific about who was unhappy with the political shape of things as of 1980:

Among those dissatisfied with the course America was taking in the 1960s and 1970s were political conservatives, typified by Republicans Barry Goldwater and Ronald Reagan. These traditional conservatives held to a firm ideology of limited powers for the national government and staunch opposition to the growth of communism. They opposed increased government spending, especially since the nation’s budget deficit was growing at an alarming rate. These conservatives feared particularly that the United States was falling behind the Soviet Union in military power and therefore opposed initiatives such as President Carter’s SALT II Treaty. They also denounced Carter’s decision to break relations with Nationalist China on Taiwan in order to establish relations with Communist China. Such an action was to them a cowardly betrayal of a long-time friend and anti-Communist force in order to accommodate a totalitarian Communist regime. Likewise most political conservatives opposed the Panama Canal Treaty as a symbol of America’s declining power and prestige. These events served to energize conservatives as a political force.

Thank goodness, there were also a whole bunch of rightwing Christians ready to help save America from the threats of high inflation (sadly, there's no mention of Gerald Ford's WIN buttons), moral decline, and disco music. Land I Love explains,

Many Christians became more actively involved in the political process as the election approached by educating people on the issues, encouraging people to vote, and taking responsibility to vote themselves. They called for a return to traditional values, knowing that without such a change, America stood in danger of being washed away by a tide of runaway inflation, immorality, crime, drug abuse, and Communism. Several conservative political action groups formed to support candidates for public office. The Moral Majority, the largest of these groups, and other politically influential people, including Constitutional lawyer Phyllis Schlafly, backed Ronald Reagan for President.

U.S. History is also pleased with the rise of the Religious Right, but also has a few qualms about its inclusion of some people whose doctrine was not sound enough for Bob Jones University:

The religious right grew in reaction to immoral trends in the United States, such as widespread drug abuse, the legalization of abortion, and increased toleration and even advocacy of homosexuality. The religious right hoped to stem this tide of immorality through political action that would re-establish America’s traditional standards of morality, standards that reflected the unique contribution of the Christian faith to American history ...

Catholics, Mormons, and numerous non-Charismatic Protestants joined this vaguely religious crusade for morality. One of the most controversial was Baptist pastor Jerry Falwell of Virginia, who...utilized television to promote his cause. Falwell founded a religious political action group called Moral Majority to help elect conservative candidates and urther conservative political causes. ... A number of fundamentalists charged that Falwell’s political activities distracted Christians from their primary purpose of preaching the gospel. Others pointed out that he was using politics to bring together religious groups which differed strongly on important points of Scriptural teaching, linking Bible-believers with Mormons and Catholics, for example.

The religious right also benefited from the fact that more Americans were turning from theologically liberal churches to more doctrinally conservative ones. In a 1977 survey, seventy million Americans described themselves as "born-again" Christians. Although their varied definitions of "born again" did not always agree with the Scriptural doctrine of regeneration, these numbers meant that a large portion of the American population was at least sympathetic to conservative religious views.

U.S. History also doesn't miss out on the chance to accuse liberals of hypocrisy in their criticism of the Moral Majority's attempt to restore prayer to public schools and otherwise advocate theocracy:

Falwell drew heated criticism, however. Liberals attacked him for supposedly breaking down the separation of church and state by attempting to force his religious views on the general public and by using a religious organization to achieve political ends. (Many of these liberals were silent, however, when many civil rights leaders were using black churches to register voters and advance liberal causes.)

Yep, those civil rights leaders were all about imposing their religious views, like "all men are created equal," onto the nation as a whole.

Also, just to give a more complete picture of the rampant paranoia of the movement (though maybe this wasn't their intent), U.S. History adds that the religious right feared that after banning the Bible and prayer from public schools, the government might take

control of Christian schools. Since the 1960s, many Christians had placed their children in private Christian day schools or had even begun to educate them at home in order to protect them from the secular influence and declining educational standards of the public schools. Some state and federal authorities began to call for regulating or even closing Christian schools. Religious conservatives, realizing that growing governmental power could threaten all constitutional religious freedoms, began to fight back with their dollars and their ballots.

Left unmentioned, of course, is the trivial detail that a lot of those private schools came into existence as white parents pulled their precious darlings out of schools that were integrating, although of course that is covered by the code word "declining standards."

One of the more fascinating bits in U.S. History is a one-and-a-half page text box on the rise of the Pentecostal/Charismatic movement in the late 20th century; it's one of those things that really reminds you you're reading a fundagelical textbook, not just a hyperconservative one. We get a brief overview of Oral Roberts' mastery of TV in the '50s and '60s, and this definition:

Charismatics are distinguished by their belief in the revival of certain New Testament "gifts": the power to heal illnesses, speaking in "tongues" (ecstatic speech) as a sign of the baptism of the Holy Spirit, and the gift of prophecy (giving out special revelations from the Spirit).

The book has some definite qualms about the theological implications of all this, while the editors presumably want to sell to the widest range of rightwing churches and parents, there are some things where a line just has to be drawn:

Charismatics have received their share of criticism from other Christians. Most often critics simply reject the existence of the gifts of tongues, healing, and prophecy in the modern church. Some point out that the Charismatic movement un-Scripturally unites groups who have little in common spiritually save a belief in Charismatic gifts; the large number of Roman Catholic Charismatics is the primary example. Critics also cite un-Biblical tendencies among Charismatics: the emphasis on the work of the Holy Spirit over the saving work of Jesus Christ, the accepting of "special revelations" over the revealed Word of God, and the separation of the baptism of the Spirit from the time of conversion. Several Bible scholars have also accused Charismatics of violating the standards for speaking in tongues that Paul set down for the Corinthian church (I Cor. 14:26-32), such as limiting such speaking to no more than two or three persons in one service.

Frankly, we were a little surprised to see that U.S. History even calls attention to these episodes:

The movement received several setbacks in the 1980s, however. Oral Roberts raised both alarm and ridicule by claiming that God would "take him home" (i.e., to heaven) unless Roberts’s supporters raised $8 million for his ministry [the book doesn't mention his vision of a 900-foot-tall Jesus -- Dok Z]. Pat Robertson lost a well-publicized effort to capture the Republican presidential nomination in 1988. Two other prominent Charismatic television evangelists were enmeshed in sex scandals.

No, kids, no need to learn the names Jim Bakker or Jimmy Swaggart. We can only conclude that U.S. History includes those embarrassments to arm students for arguments with nasty secularists, so that they can confidently reply that those people were not really Bible-believing Christians like the good folks at Bob Jones University.  Rightwing Christian unity is nice, but now and then you need to prune out the heretics.

We had a feeling this might happen: we've reached the end of our review of "why Reagan was necessary," and the Great Communicator hasn't even made it onstage yet. Fear not, dear readers -- we'll have some Actual Ronnie next week.