Sundays With The Christianists: U.S. History Textbooks That Do Not Like Broccoli 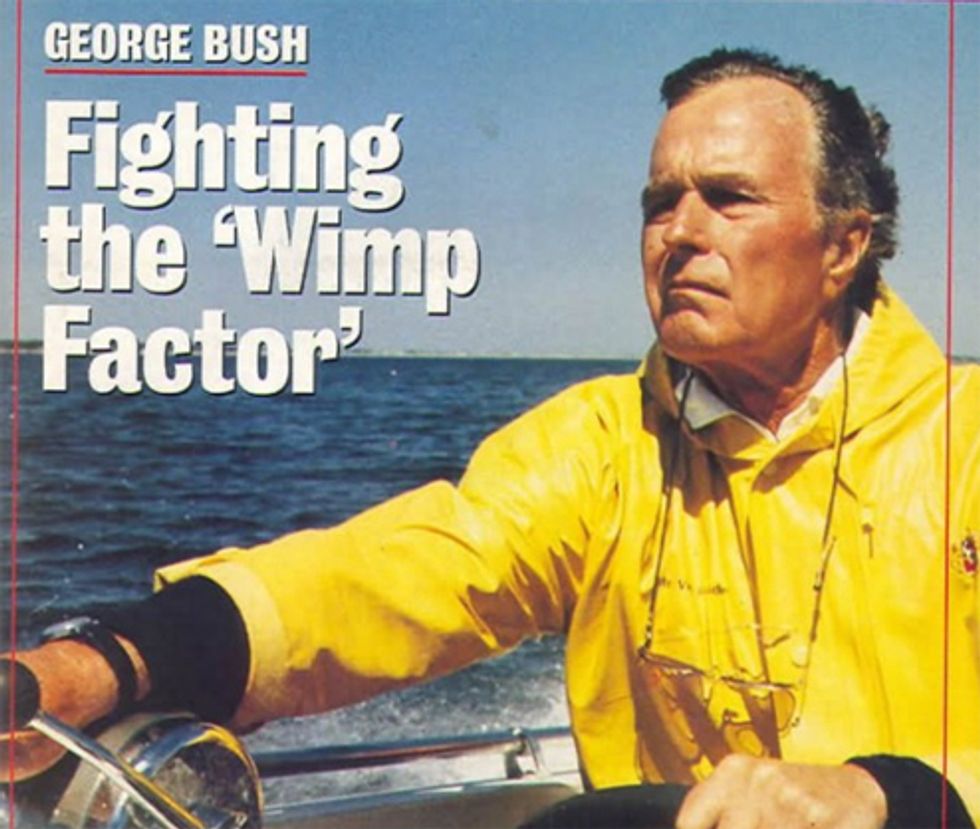 After a million weeks on Ronald Reagan, the Greatest President Ever, our survey of a couple of rightwing Christian textbooks will devote about 1500 words to his successor, George Herbert Walker Kennebunkport Milli Vanilli Bush, the 41st President and only the second-worst President named "George Bush." And Happy Father's Day to a very middling president whose son managed to make him look like a freakin' statesman.

You can pretty much get the tone of our two textbooks' coverage of GHWB's four years from the section headings. Our 11/12th-grade textbook, United States History for Christian Schools (Bob Jones University Press, 2002) uses the nice, noncommittal "The Bush Presidency," while our 8th-grade text, America: Land I Love (A Beka, 2006), shakes its head sadly and leads with "In Reagan's Shadow."

Land I Love is especially unhappy that Bush was soft on Communism in the aftermath of Tiananmen Square:

As many expected, the Communists sent soldiers to crush the freedom demonstrations in Tiananmen Square. Many people were killed, and others were jailed. Once again, the world was reminded of the cruel oppression of Communism.

For many years, China had received Most Favored Nation (MNF) trading status, meaning that the United States extended certain trading privileges to China in exchange for the same. After the massacre in Beijing, Congress passed an amendment to withhold MFN status from China. But President Bush believed that the best way to combat Communism in China was through free trade. Thus, Bush continued to grant China MFN trading status in spite of Congressional opposition, overlooking the Communist tyranny and violation of human rights by the Chinese government.

Yes, that was indeed Land I Love dissing free trade and grumping that the President didn't respect the will of a majority-Democratic Congress. Go figure. By contrast, U.S. History somehow doesn't even discuss Tiananmen in its main section on the Bush presidency, relegating it to a brief mention in a text box on the fall of communism in Europe in 1989, noting that China crushed its democracy movement while Eastern Europe freed itself from oppression.

On the domestic side, both books note the Savings and Loan crisis of the late '80s and early'90s; oddly enough, neither book suggests that the deregulation of financial institutions had any role to play in the fraudulent schemes. Instead, Land I Love embeds its short paragraph on the S&L scandals in a section on the "Growing National Debt," attributing the problems to "careless speculation and illegal accounting procedures" and actually misidentifying the agency that ran the resulting bailout as the "Federal Deposit Insurance Corporation (FDIC)." For people who think history books ought to contain facts, the actual bailout was managed by the Federal Savings and Loan Insurance Corporation (FSLIC), which operated in a similar way, but was very definitely a different agency. And yes, the error appears in the original 1994 edition of Land I Love, and was never corrected for the second edition published in 2006.

U.S. History is less concerned about how the crisis happened than with the fact that The American Taxpayer got stuck with the bill. It also uses the scandal to foreshadow the Coming Evil:

Unsound investments and a drop in oil prices drove several of the "S&Ls" into bankruptcy. Because government guarantees underwrote the deposits in the banks, some $300 billion of government money ($3,000 per adult taxpayer) was required to cover the debts of the defaulting banks. Voters and federal prosecutors wanted to know why so many troubled S&Ls were allowed to stay afloat for so long. Some suspected that political favors, more than financial soundness, kept the S&Ls open. Investigators in several states delved into the murky, even shady transactions behind the S&Ls. Among those investigated in the scandals was the then little-known governor of Arkansas, Bill Clinton.

Dah-dah-DUUNNNNNHHHH!! Strange, no mention of the "Keating Five" Senators who were more directly implicated in helping out sleazy Arizona S&L head Charles Keating; apparently, that's not nearly as dramatic as the fact that Bill Clinton was "investigated."

President Bush himself comes in for criticism for, of all things, the Americans With Disabilities Act. U.S. History accuses him of flip-flopping:

This legislation prohibited job discrimination based on disabilities. It also required local governments and businesses to improve and alter their accommodations (e. g., provide special parking places for the disabled, install ramps for wheelchairs) to benefit the disabled. When he opposed the legislation as an intrusion by the federal government on local governments and private citizens, Bush was labeled as uncompassionate by the bill’s supporters. When he finally did give in and sign the act, Bush angered those who opposed the new costs and the flood of lawsuits that resulted from the act’s adoption.

And both textbooks take Bush to task for going back on his sacred "Read my lips: no new taxes" campaign promise; U.S. History says that "budget deficits and pressure from Democrats in Congress made him rethink his vow" -- and even though Congress was just as responsible, "Bush took most of the blame for the tax hike," and we ended up with Grover Norquist somehow being able to destroy any Republican candidate who ever allowed any tax increase ever again, although that doesn't get mentioned. Land I Love is, predictably, considerably more clear on the evils of the tax increase:

Seeing no other alternative, President Bush finally agreed to raise taxes in order to keep the government from going further into debt. But it soon became evident that the extra tax revenue would not be used to reduce the national debt, because Congress continued to increase government spending. Many conservatives felt that Bush should have known that raising taxes only encourages more government spending.

Foolish, foolish George Bush! If only he had continued Ronald Reagan's sound policy of cutting taxes and increasing military spending! (Needless to say, Land I Love observes that Bush faced a huge debt and deficit but doesn't note that the national debt had ballooned under Reagan. But that's OK, it was all Congress's fault.) Another strange omission -- given both books' fondness for culture-war issues, Vice President Dan "Potatoe" Quayle's war on Murphy Brown and single motherhood never gets mentioned.

GHWB gets far more generous treatment for his foreign policy, because hw Got Tough with Saddam Hussein; before we get to the praise for the Gulf War, however, we do have to note that Land I Love is very sad about another overseas development:

In 1989, the South African government released the Communist leader Nelson Mandela from prison. Mandela toured the United States in the summer of 1990, claiming to be a moderate socialist. The news media portrayed him as a hero and focused national attention on apartheid, South Africa’s policy of racial segregation, overlooking the Communist movement that Mandela led.

Stupid old media, thinking that systematic racial discrimination was somehow worse than the fact that the guy who opposed it was a communist! The book notes that apartheid ended, but somehow fails to provide any information on the communist revolution that inevitably followed, largely due to its inconvenient nonexistence.

Both books are reliably rah-rah about the wonderful success of the Gulf War, in which no smart bombs ever hit civilians and the bombing and strafing of retreating Iraqi troops on the "Highway of Death" doesn't need to be mentioned. U.S. History emphasizes the lopsided victory:

Allied planes flew over 100,000 missions during the six-week war, losing fewer than 50 aircraft. With losses of fewer than 200 men and women, the American—led coalition wrecked nearly 4,000 enemy tanks and captured over 50,000 prisoners as it destroyed the effectiveness of an enemy force numbering more than 500,000 soldiers. General Schwarzkopf said, "The loss of one human life is intolerable to any of us who are in the military. But ... casualties of that order of magnitude, considering the job that’s been done and the number of forces that are involved, is almost miraculous."

Even so, the authors say that there were still long-term problems following that stunning success:

Although defeated, Saddam Hussein still ruled Iraq and threatened the stability of the Middle East. He resisted all efforts by UN inspectors to inspect his military sites and defied an embargo placed on him by the victors. Among the allies, differences forgotten in war were soon remembered in peace. Trouble continued to simmer in the Middle East long after Desert Storm had blown over.

Egad! Trouble in the Middle East? Imagine that! Even so, U.S. History and its cheerleading seem positively sober compared to some of the weirdness in Land I Love, which seems almost delusional at times. For one thing, Land I Love claims that one of the decisive reasons for the UN's decision to support action against Iraq was that "Israeli secret agents discovered that Hussein was close to developing an atomic bomb," and it also suggests that once the war began, "Israeli forces stood ready to assist," when in reality the Bush administration pressured Israel to stay out of Iraq for the sake of keeping Arab nations in the coalition.

Even stranger, according to Land I Love, the most important lesson of the Gulf War is that we finally overcame the greatest shame of our military history -- not Vietnam, but the firing of Douglas MacArthur during the Korean War:

Bush insisted that the war in the Persian Gulf be directed by military men rather than by politicians. He knew that soldiers knew better than politicians how to fight and win a war. Thus President Bush placed General Colin Powell in command of Operation Desert Storm. As Chairman of the Joint Chiefs of Staff, Powell was second in military command only to the President ... For the first time since World War II, Congress followed the counsel of a military commander.

And then there's this, which has to be one of the single weirdest sentences in the entire book:

Because General Powell had to remain in Washington, D.C., General Norman Schwarzkopf was appointed to lead the troops into combat...

Honestly, that sounds like something an eighth-grader would write, not something written for eighth-graders to learn. Do these idiots really have no idea how military command structure works? Are they trying to suggest that under other circumstances, the Chairman of the Joint Chiefs would directly command troops in battle? We can only imagine how teachers explained that weird little phrase.

In any case, the Gulf War was a huge success, and we also learn that

Unlike the Vietnam War, the Gulf War had the support of the American people. Patriotism and national unity in America reached an all-time high since World War II.

Also, President Bush wisely decided not to invade Iraq to topple Saddam, "because the primary objective, the liberation of Kuwait, had been achieved." File that thought away for a few chapters, OK?

Unfortunately, despite the brilliant success of the Gulf War, George H.W. Bush was not re-elected; U.S. History, as we'll detail next week, sees this as the result of a fairly complicated set of circumstances, while Land I Love knows exactly what happened: Even though the economy was "strong and healthy,"

the liberal media helped...create a "climate of economic crisis," warning the American people that only a major change in leadership could save the nation from economic disaster.

You guys remember that, right? When everyone in the media said "We totally need a new president" and we all foolishly believed them?

Next Week: Bill Clinton: Absolutely the Antichrist, because neither of these books knew Obama was on the way.