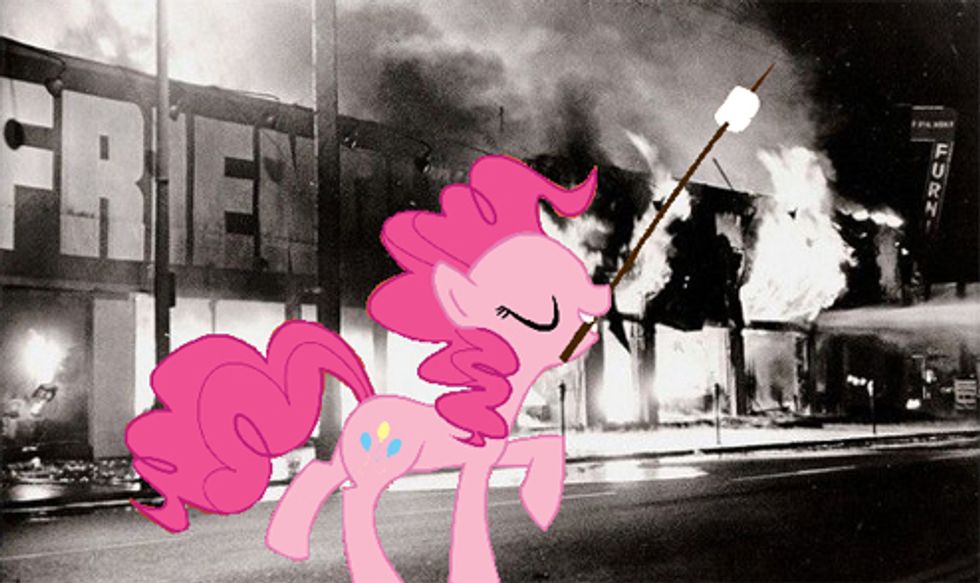 This week, we'll wrap up our rightwing Christian-school textbooks' version of the 1960sas they actually happened -- not the way the liberal media would have you believe -- with a look at the Civil Rights movement, which is  pretty good timing considering this week's 50th anniversary of the signing of the 1964 Civil Rights Act. Both of our textbooks agree that ending segregation was a very good thing, although they are a little unclear on exactly how segregation came into being in the first place -- apart from mentioning that it began as a backlash to Reconstruction, and the obligatory mention of Plessy v Ferguson, neither text goes into it too much. Jim Crow was just something that was kind of there, somehow.

But it sure is nice that segregation ended. As our laff riot of an 8th-grade textbook America: Land I Love (A Beka, 2006) puts it in its chapter on postwar prosperity, "Many Americans saw that the time had come to end racial prejudice." And so many Americans decided to just knock it off already.

We learn that in the early 1960s, the nonviolent methods of the civil rights activists worked pretty easily, and somehow the violent backlash from the white establishment just doesn't get mentioned. Here's a typical explanation from Land I Love:

Easy-peasy! (And, OK, one thing that actually is useful, we suppose, is the explanation of that vanished bit of commerce, the department store lunch counter.) We're also impressed that desegregation apparently resulted when enlightened store owners simply saw how bad for business segregation was. Nobody got dragged off to jail, there was no Bull Connor, no police dogs or fire hoses,* no "Letter From Birmingham Jail."

Astonishingly, our 11th/12th-grade textbook, United States History for Christian Schools (Bob Jones University Press, 2001), which tends to go into more depth -- as you'd expect from a book for older readers -- actually says less about this part of the civil rights movement. It gets a whopping two sentences:

U.S. History does at least mention segregationist backlash later, albeit in the context of a later section on "Racial Conflict" later in the Sixties, and divorced from  any mention of that "focus[ing] more attention on social equality" stuff:

Fighting in the Streets: The civil rights movement had never been free from violence. Early protest marches and demonstrations sometimes ended with assaults on the demonstrators by mobs of angry whites or even by policemen using tear gas and police dogs. These incidents, however, paled in comparison to what happened during the Johnson years.

And isn't it just darling how that's phrased? It's not that whites reacted violently to demands for civil rights, no, not at all -- the civil rights movement itself had just "never been free of violence."

Neither book is any better on the topic of the Freedom Riders, about whom we learn little more than that they were bus aficionados. Land I Love gives us a description that can be described as "factual" only in the loosest possible sense:

To protest segregation at bus stations, many black and white college students took freedom rides throughout the South. Upon their arrival at a bus station, the freedom riders refused to obey the signs for segregated toilets, water fountains, and waiting rooms. In 1961, Attorney General Robert F. Kennedy ordered the Interstate Commerce Commission to ban segregation in any facilities used by interstate buses.

U.S. History adds only the fact that the Freedom Rides were intended to see if federal court decisions actually meant anything in the South:

Testing the effect of Supreme Court decisions prohibiting discrimination in interstate transportation, black and white "freedom riders" traveled in buses across the deep South in 1961 to challenge segregated buses and terminals.

No mobs, no beatings, no buses burning on the side of the highway, no Bull Connor giving advance notice to the KKK that they'd have first crack at the buses as they arrived in Anniston and Birmingham Alabama, no mention of the police escort being withdrawn at the Montgomery city limits, no arrests of the riders themselves.  In both books, it was apparently a  nice sightseeing tour, with some activism. We'd love to see the editorial conferences where these sections were planned.

And then, of course, there's the 1963 March on Washington and King's "I Have a Dream" speech, which both texts reduce to the same two passages:

I have a dream that one day this nation will rise up and live out the true meaning of its creed: "We hold these truths to be self-evident: that all men are created equal."**

... I have a dream that my four little children will one day live in a nation where they will not be judged by the color of their skin but by the content of their character.

None of that stuff about the nation writing a check that came back "insufficient funds;" not even any of that "let freedom ring" or "thank God Almighty, I'm free at last" crap. Gotta teach the kids that Martin Luther King, more than anything else, would never have supported affirmative action.

Would you be surprised to learn that neither book mentions that a month later, Birmingham's 16th Street Baptist Church was bombed, killing four little girls? If your answer is "Yes," then welcome to our weekly feature "Sundays with the Christianists," because it is obviously your very first time here.

Following the passage of the Civil Rights (1964) and Voting Rights (1965) Acts, which both books agree were Very Good Things, we learn that things got ugly. It's surprising how the amount of detail increases as the story progresses. To highlight the contrast, let's go back to that bit from U.S. History about how the movement was never free of violence. It goes on to briefly note the 1964 murders of voter registration workers (though not by name) in Mississippi, and then includes this weird summary that somehow removes the Selma-to-Montgomery Marches and the beatings of marchers by state troopers from history altogether:

...during a voting rights protest in Selma, Alabama, three white civil rights advocates died in separate incidents at the hands of Klansmen and other extremists. (Johnson used the Selma incident to spur Congress to approve the Voting Rights Act.)

History is way nicer when you don't have to know that those "other extremists" included Governor George Wallace, the State Police, and the county sheriffs of the area, or to know that the FBI spread false rumors that Viola Liuzzo, one of those murdered after the march, had been a drug addict, a member of the Communist Party, and a floozie who slept with blacks.

In contrast, when we get to the riots that exploded later in the '60s, we get plenty of detail:

Northerners who had approved of the negro cause when it centered in the South suddenly found it a far different matter when northern blacks began to call for desegregated schools and neighborhoods.

Racial hostility blazed the hottest in the cities during the summers of 1965, 1966, and 1967. Black resentment of discrimination and apparent slowness in meeting black grievances led to uncontrolled riots. The first of this series of urban riots began in a predominantly black section of Los Angeles known as Watts. Only days after Congress passed the Voting Rights Act, a white policeman in Watts tried to arrest a young black for drunk driving. Angry crowds began to gather in the summer heat, and wild tales of police brutality began to circulate. Finally, the tension exploded into an orgy of destruction. Mobs roamed Watts, burning and looting. Police and eventually the National Guard tried to restore order. In six days of violence,thirty-four people died, nearly nine hundred were wounded, and $45 million in property was destroyed.

And so on -- where the violence directed against civil rights advocates was mentioned only in passing, or erased altogether, we get tons of details about property damage in Watts and later in Detroit, although there's no mention, of course, of police brutality or of National Guardsmen firing into crowds.

Land I Love explains that both sides were guilty of extreme actions, mostly due to meddling outsiders:

During the civil rights movement, many Southerners resented federal officials telling their state and local governments what to do. Most black and white Southerners had long lived together in harmony; they had been taught to accept segregation as a way of life. However, some people in both the North and South took the law into their own hands. A few belonged to white supremacist groups like the Ku Klux Klan, and a few belonged to black supremacist organizations. The most prominent black supremacist leader of the 1960s, Malcolm X, considered Martin Luther King, Jr.’s methods too peaceful and slow. Malcolm X wanted to assert what he called "Black Power," calling for the segregation, or complete separation, of the races to preserve black culture.

We also learn of Malcolm X's murder, and we're cautioned that "As time went by, many people forgot that Malcolm X had supported violence and racial separation, and he became a symbol of black pride."

And it turns out that, even though Martin Luther King advocated nonviolence, he also set a very bad example, and things went astray when "Communism and other radical ideas hurt the civil rights movement":

Martin Luther King, Jr.’s teaching that people should break the law in nonviolent ways to bring about change opened the door to other kinds of lawbreaking. When power-hungry individuals stirred up the people, riots terrorized black neighborhoods in the late 1960s. In 1968, while on a visit to Memphis, Tennessee, Martin Luther King, Jr. was assassinated by a gunman who used the violent atmosphere to justify his own racism.

Isn't it ironic how, by urging people to break the law, King laid the groundwork for his own murder? Even so, he was a hero, because "Today, people of all ethnic groups are striving to realize Martin Luther King, Jr.’s dream that people be judged by their character rather than by the color of their skin." That's really the only thing he cared about.

Oddly, for all its loving detail on urban riots and black radicalism, U.S. History makes no mention of Malcolm X at all, and only names the Black Panthers, which it calls "the black version of the Ku Klux Klan." The last thing we hear about the ashes of the Civil Rights movement in this chapter is this ominous passage:

Racial divisions seemed to be deepening in America. Some began to fear a race war which blacks could not win but in which all races would suffer.

Funny how some of our more trigger-happy citizens in the 21st century are still looking forward to the chance to fight that race war, just as soon as the EBT cards stop working, of course.

Next Week: On to the '70s! Put on your leisure suits and get ready to learn all about Watergate.

* You want a really good compact history of the Birmingham Campaign? Look no further than the Wikipedia entry, and when people tell you that Wikipedia's not a trustworthy source of information, tell them to read it. Ditto for the entry on the Freedom Riders.