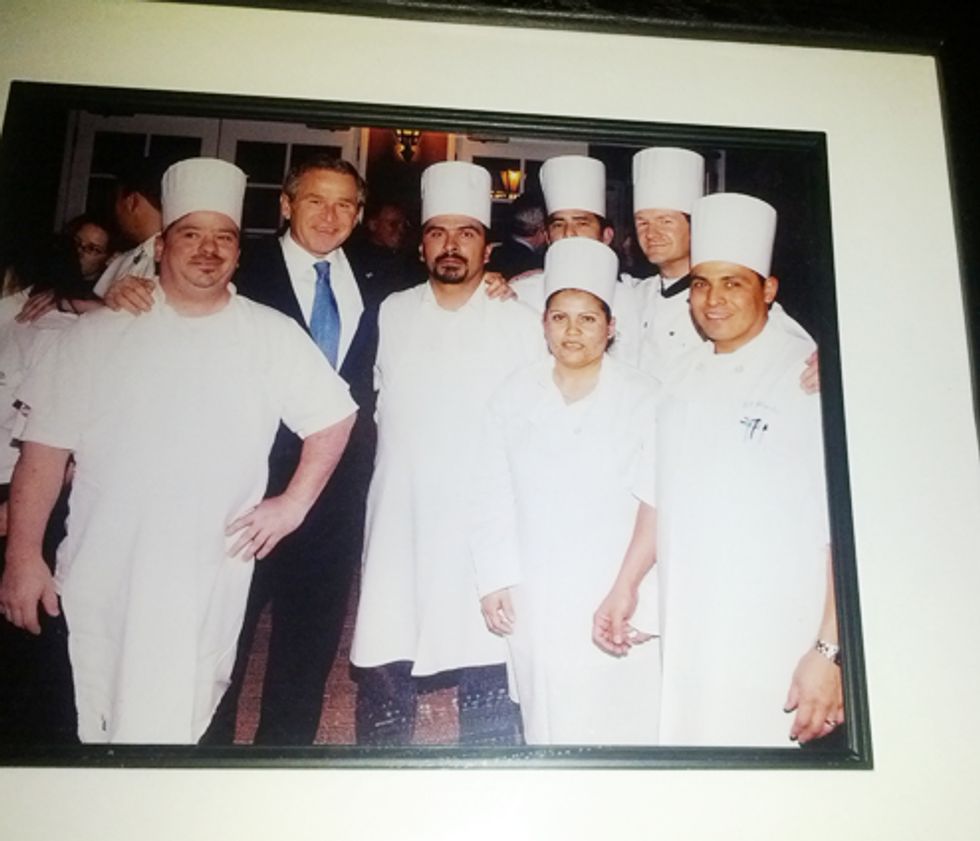 Will Mittens lose Ohio to Weird Rick? We don't know, is the thing! The two losers are still neck and neck as 65% 85% or so of precincts have been counted. The cable news channels are beginning to talk about important vote mini-clusters in small counties. This usually means we'll be here until 5 a.m. waiting for some 90-year-old poll volunteer to come out of a cabin in the woods and turn in the 15 decisive votes that had been missing all night. Let's type about it! (See liveblogs one,two,three, and four, for further trenchant Super Tuesday political commentary.)

10:38 -- Lightning-fingered commenter "Barb" shares this photo from some restaurant. It's a powerful reminder of what real leaders look like. George W. Bush is in the photo, too.

10:41 -- CNN suggests -- get this -- that Mitt Romney still has trouble winning people over. He will have to work on this! And here we watch this, like suckers. They just replay the tape of the panel discussion from Iowa caucus night over and over every primary night now. The 2008 Iowa caucus night.

10:54 -- Oh come on: "@ChuckTodd reports NBC News will NOT call Ohio TONIGHT." Does this mean we have to go back to our lives soon? Ugh.

10:57 -- Most annoying, hackneyed debate/election night pundit line of this election cycle that must never be said anymore because it's a joke of extremely limited comedic return: "The winner tonight? Barack Obama!"

11:02 -- "We say it boldly, and we say it exclusively: Romney is slightly ahead of Santorum in Ohio" -- Wolf Blitzer.

11:10 -- Roll Call: "With 65% reporting, Marcy Kaptur leads Dennis Kucinich 57%-39% in #OH09. Hard to see how he makes up that margin." Sounds good to this Wonkette writer! Throw your tomatoes right here, right at the browser.

11:17 -- From Benjy Sarlin at TPM: "'I don't want to miss a thing' comes on at Santorum party to audible, visual groans." It's gotta be Rick Santorum's favorite song, right? Either that or the Goo Goo Dolls song from the City of Angels soundtrack.

11:22 -- "Let's go out to the Taco Bell Arena" -- Wolf Blitzer. It's a simple statement of fact! And yet can we get an audio clip of Wolf Blitzer saying that, anyway, to embed on America's grave?