Supreme Court Gets Another Chance To Impeach Obamacare 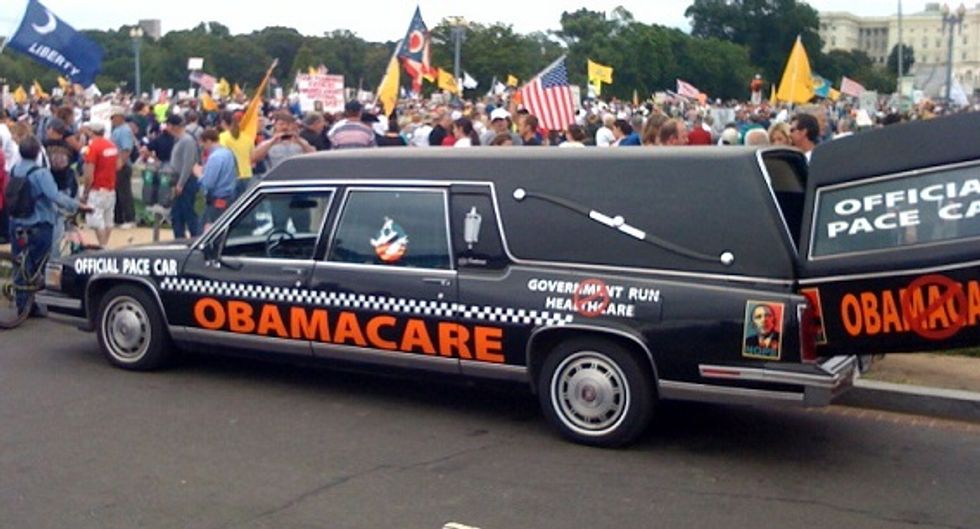 As Republicans have been telling us since before President Obama even signed the Affordable Care Act, they will vote to repeal it as many times at it takes -- so far, more than 50 -- until it is gone forever. And after Tuesday's election, Sen. Mitch McConnell and House Speaker John Boehner said AGAIN that they are going to fix all the things the president has done to destroy America by repealing Obamacare, for real this time, which will create jobs somehow, not sure how that works, Republican magic, probably.

Sure, we've laughed at them, except now they just might get their wish. SCOTUSblog reports that the Supreme Court has agreed to hear another challenge to the law, King v. Burwell, this time on the issue of whether government subsidies for those who cannot afford insurance on their own are legal or not legal. You know, all those poors who for the first time ever in their lives were able to get themselves some healthcare because of the socialist communist fascist whatever redistribution of wealth so that the Greatest Healthcare System IN THE WORLD! would be available to regular working stiffs who do not have bank accounts in the Cayman Islands. Here, let's let Lyle Denniston (Lyle!) at SCOTUSblog splain it for us:

Since the health care exchanges have been in operation, nearly five million individuals have received federal subsidies to help them afford health insurance on an exchange run by the federal government. The average subsidy had been about $4,700 per person. The fate of those subsidies apparently will now depend upon how the Court interprets four words in the Affordable Care Act. In setting up the subsidy scheme, Congress said it would apply to exchanges “established by the State.”

So even though turncoat chief Justice John Roberts -- who was supposed to be an objective umpire, but for the right -- determined that Obamacare does not equal the Holocaust, there's a chance he could change his mind this time. Neat! Also ugh.

If the Supreme Court decides that those government subsidies are not what Thomas Jesus Jefferson had in mind when he wrote the Constitution and the Bible, the very people the law was most intended to help could go back to the sweet days of liberty and freedom when they didn't get to have any healthcare at all. But at least it would be a victory for the Republicans and America. Or something.