Supreme Court Not Having North Carolina's Jim Crow, Thanks And Fuck You 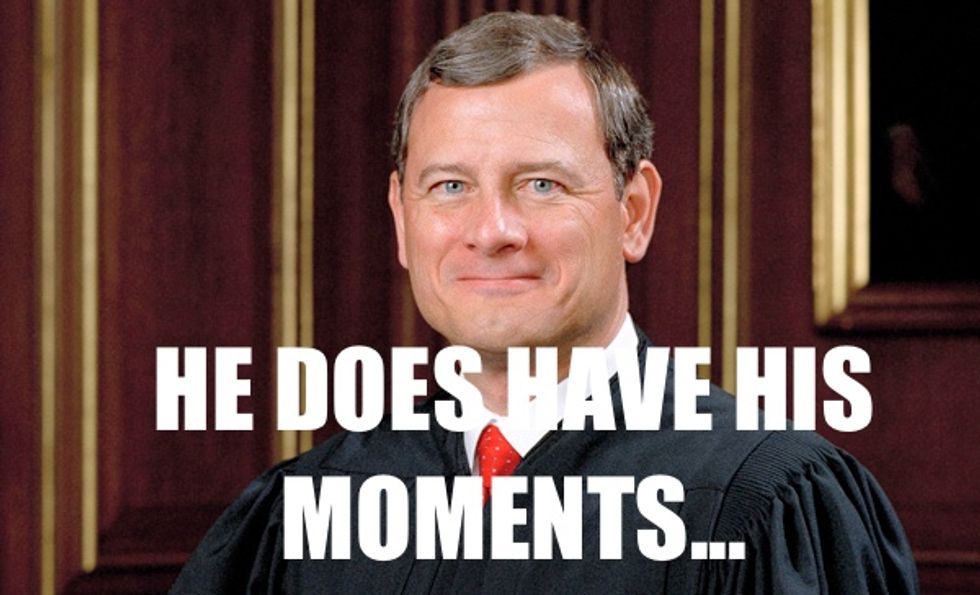 Poor, naive Chief Justice Roberts! How was he to know back in 2013 when he gutted the Voting Rights Act that state legislators would take it as a license to bring back those oldtimey Jim Crow laws? Who could have seen that one coming?

On June 25, 2013, Justice Roberts was the fifth vote in Shelby County v. Holder, overturning the requirement that states with a history of racist vote suppression must pre-clear any changes to their election laws with the Justice Department. In an amazing coincidence, on June 26, 2013, North Carolina's Republican legislators decided to embark on a sweeping overhaul of their state's voting laws.

Before enacting that law, the legislature requested data on the use, by race, of a number of voting practices. Upon receipt of the race data, the General Assembly enacted legislation that restricted voting and registration in five different ways, all of which disproportionately affected African Americans. [...]

Although the new provisions target African Americans with almost surgical precision, they constitute inapt remedies for the problems assertedly justifying them and, in fact, impose cures for problems that did not exist. Thus the asserted justifications cannot and do not conceal the State’s true motivation.

Prior to Justice Roberts's gift to American voters in Shelby, black registration and turnout in North Carolina had almost reached parity with whites. Obama carried the state in 2008, and Romney barely squeaked out a win in 2012. But then Republican legislators got to work. If black voters wouldn't see reason and vote Republican, maybe it was because voting was just too easy!

There was no evidence of fraud by in-person voters, although there was a marginal degree of fraud in absentee ballots. But white people vote by mail! So the Republicans hunched over the demographic data and came up with this fine plan instead.

The US District Court for the Middle District of North Carolina found that there was no discriminatory intent in North Carolina's voting law. Oh, mah stahs and gahters, how could a person think such a thang? It was entirely coincidental that black turnout for early and primary voting declined 8.7% between 2012 and 2016.

In July of 2016, the 4th Circuit Court of Appeals ruled the law was clearly enacted with discriminatory intent. The fact that Republicans ordered up all that demographic data was a big tip off! Republican Governor Pat McRory pleaded with the Supreme Court to prettyplease let them protect the integrity of the ballot for the November election, but the Supreme Court refused to intervene. Donald Trump carried North Carolina, but voters gave poor Pat McRory the boot. Sad!

And then all hell broke loose in North Carolina! New Governor Roy Cooper and Attorney General Josh Stein, both Democrats, sought to withdraw the appeal of the 4th Circuit decision to the Supreme Court. The Republican General Assembly argued that they had the right to obtain private counsel to keep the case alive. And then the Speaker of the House decided to intervene personally to tell the Supreme Court how absolutely important it was for North Carolina to "protect the ballot!"

Today Justice Roberts brought the final hammer down on this episode of North Carolina's long running soap opera, The Black and the Voteless. The Supreme Court will not be hearing North Carolina's argument as to how they accidentally came up with a plan that disenfranchised black voters so well, which was never their intent. We have no idea which Justices wanted to hear North Carolina's appeal, but we know that at least five of them elected not to stick their noses into a steaming pile of racist horseshit. So, thank you Justice Roberts for going easy on us this morning, since this promises to be a crazy, nightmare week. Can we look forward to future non-crazy decisions from your Honor in the future? We hear that DC's wanton ways have ruined many a Republican Judicial appointee...

NICETIMES! We'll take 'em where we can get 'em!

Hey, we managed to give you a story that wasn't FUCKING DEPRESSING! No mean feat in the Trump era! Don't forget to tip your server.