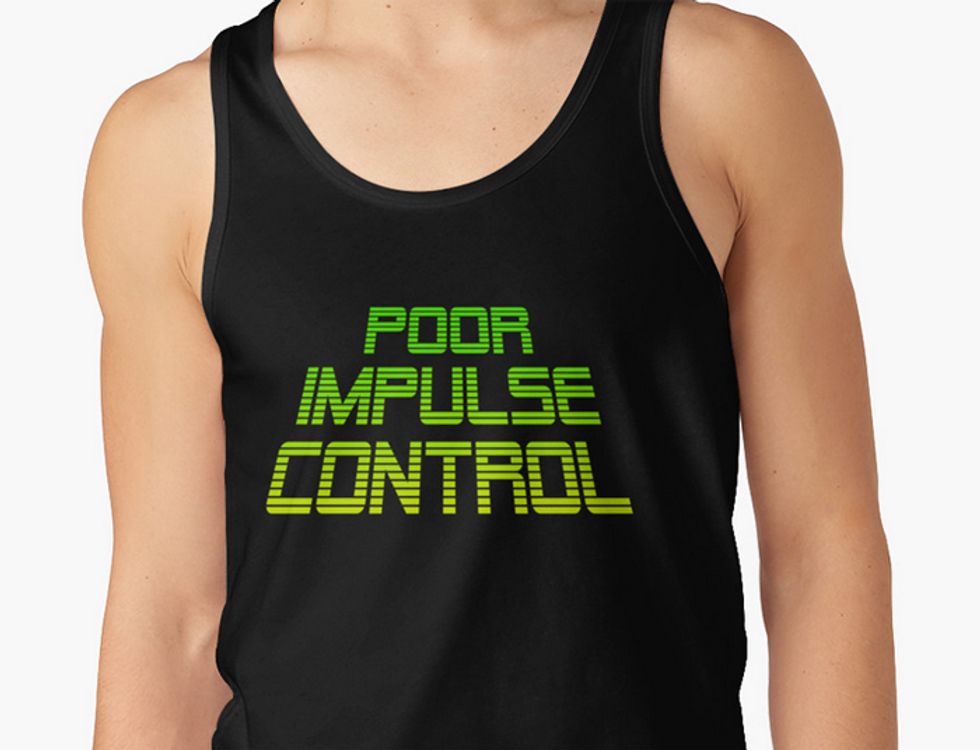 Glad they have this in a sleeveless undershirt. Isn't there another term for those?

both men lost motions to dismiss the [federal firearms] charges, based on the same argument: that their prior assault convictions did not meet the definition of “misdemeanor crime of domestic violence” because the applicable Maine statute broadly permits a conviction for “intentional, knowing, or reckless” assaults and their indictments did not specify which type of intent they actually had.

Today's decision effectively said that even though the federal statute doesn't specify anything about intent, a misdemeanor domestic violence conviction is a misdemeanor domestic violence conviction, and the Gun Nazi says "No Guns For You!" (Little known fact that our deleted commenters will no doubt discover: Hitler got his start by taking guns away from spouse abusers.) "Reckless" doesn't mean "accidental" here; HuffPo explains:

Under Maine law, a person acts recklessly when he or she “consciously disregards a risk that the person’s conduct will cause such a result.”

So basically, acting without giving a damn to the consequences of one's actions. Just imagine all the Manosphere morons who'll decide the Supreme Court is attacking a basic principle of masculinity with that. The majority opinion, by Elena Kagan, didn't buy the notion that Congress only intended guns to be kept out of the hands of intentionally abusive partners, but was perfectly cool with recklessly abusive partners having all the firepower they want:

“Then, as now, a significant majority of jurisdictions -- 34 States plus the District of Columbia -- defined such misdemeanor offenses to include the reckless infliction of bodily harm,” Kagan wrote. “In targeting those laws, Congress thus must have known it was sweeping in some persons who had engaged in reckless conduct.”

Reckless conduct was intended to be covered under the Lautenberg Amendment, which was enacted to bar domestic abusers convicted of “garden-variety assault or battery misdemeanors” from owning guns, she added.

Monday's decision extends a 2014 Supreme Court decision that upheld the Lautenberg Amendment's restrictions on gun ownership for misdemeanor domestic violence offenders. In some ways, it's a very narrow decision, because it applies only to a small portion of domestic abuse cases -- the ones that aren't "garden variety" abuse where the intent to do harm is clear -- but as Vox points out,

it’s still important because of what the court didn’t do. The court could have decided that gun laws don’t cover domestic violence crimes in which the abuser’s intent isn’t clearly violent -- and that could have, depending on how some states and the feds apply their domestic violence laws, limited the scope of federal restrictions on guns for domestic abusers. But the court instead allowed federal gun restrictions to remain more broad.

It may also have broader implications in the Court's willingness to consider domestic violence as an important aspect of gun crimes -- there are a hell of a lot more domestic abuse cases than there are terrorists running around loose, for instance, and victims of domestic violence are especially at risk of being threatened or killed. The 1996 Lautenberg Amendment already bans gun possession by those convicted of misdemeanor domestic violence, and states keep nibbling around variations on that theme, like whether people convicted or accused of stalking, or those subject to personal protective orders in DV cases should be allowed to have firearms. There have been some (unsusccessful) attempts at the federal level to broaden the prohibition on guns for such situations as well. For the most part, the NRA says anyone falling short of a felony domestic violence conviction absolutely mustn't have their Holy Second Amendment rights infringed, because wasn't allowing stalkers to keep their rifles what we fought the Revolutionary War for?

Still, Monday's decision is definitely a step in the right direction, since it clarifies that no matter what your intention was when you beat up your spouse, you don't have any business buying a gun. So no guns for you recklessly abusive people. Unless of course you want to buy a secondhand semiautomatic rifle at a gun show or from a Craigslist ad. Such a purchase would definitely be illegal. But since no background check is required, nobody will ever know.