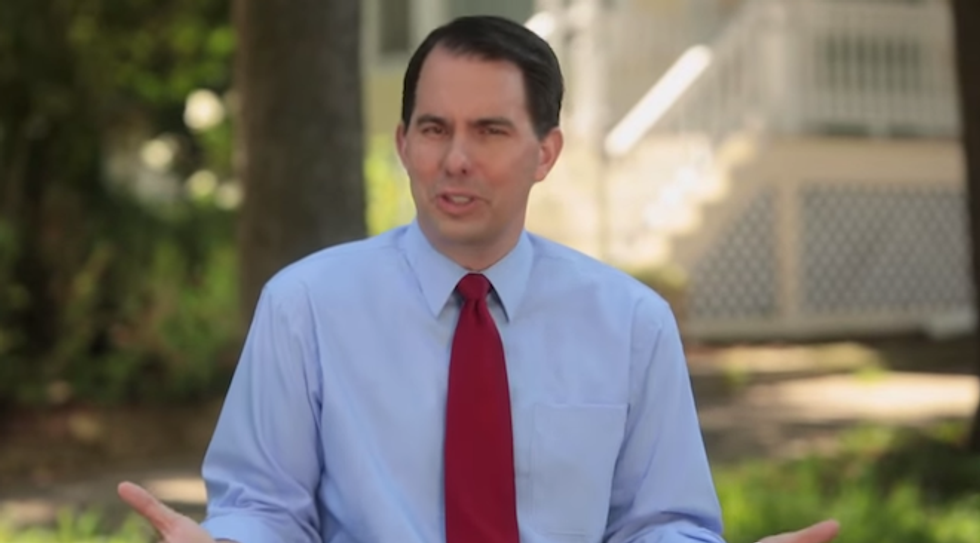 Gov. Scott Walker wasthis close to being able to keep those lousy Democrats from voting, until the Supreme Court blocked Wisconsin's new voter ID law from going into effect before the midterms in November.

Walker, following the example of his conservative gubernatorial brethren across the country, used his first term to push through the new voter restrictions -- or, as Rachel Maddow calls it, "cheating" -- then spent two years and a lot of public resources defending them in court. He got a sudden thumbs-up on Monday by three judges from the 7th Circuit Court of Appeals, in spite of the fact that voting is underway for the midterm elections, but we imagine Scotty's party hat is a little droopy after six of the Supremes rained on his voter suppression parade.

We can't figure out what the Supreme Court's problem might be. The 7th Circuit had allowed nearly a whole month to prepare precinct workers, election officials, and hundreds of thousands of voters for a radical change in voting procedure in an election in which ballots have already been cast. With Republicans in the state legislature refusing to release funds for informational campaigns to tell voters about the new restrictions, we're sure everything would have gone smoothly on Election Day!

The Supreme Court, having recently freed North Carolina to crank their voter suppression up to 11, decided that it's just not sporting to surprise Wisconsin voters with their newfound disenfranchisement when they're already voting. Antonin Scalia, unwilling to be a party to this miscarriage of justice, woke up Clarence Thomas to help him arglebargle some objections for the Court's resident Webelow Samuel Alito to translate into English and append as a snooty little post-script. Sure, it might be "particularly troubling" that ballots had already been cast without warning those voters that they hadn't documented themselves well enough to have their votes counted, but nonetheless, the 7th Circuit panel hadn't "demonstrably erred," so bring on the ballot-shredders!

Gov. Walker must be crushed after the initial excitement of getting the go-ahead to crack down on Wisconsin's non-existent scourge of voter impersonation. He's mysteriously not coasting to a second term after tearing down the state's long-held respect for union labor, failing to deliver on sweeping campaign promises to create All The Jobs, and throwing partisan bombs on gayness and abortion. Excluding voters without government ID would almost certainly push down Democratic turnout and help ease Walker's heartburn over his unexpectedly hairy re-election campaign, and Scotty's still holding out hope that he'll be free to turn away legitimate voters in November:

Voter ID is a common sense reform that makes it easy to vote and hard to cheat.  While we understand the need for awareness about the law, we think it is important voter ID is implemented, so voters can have confidence in the electoral process, and we are confident the law will ultimately be upheld.

And this, dear Wonketteers, reminds us how important it is toss Scott Walker out of office this fall, while he is facing a serious challenge from former state commerce secretary and Trek Bicycle executive Mary Burke. Please throw many wonkbucks into our special Wonk For Burke page, and let's help carry Mary Burke over the line and into the Governor's Mansion! Scott Walker's anti-democracy, anti-labor, anti-woman agenda has no place in our enlightened America. Let's buy some wonkfluence WITH OUR MONEY and send Scott Walker packing!

You can follow Beth on Twitter. She offers complimentary translations of Midwestern English into your coastal dialect of choice.