Sure We Believe You Sarah Huckabee Sanders! Wonkagenda For Fri., May 4, 2018 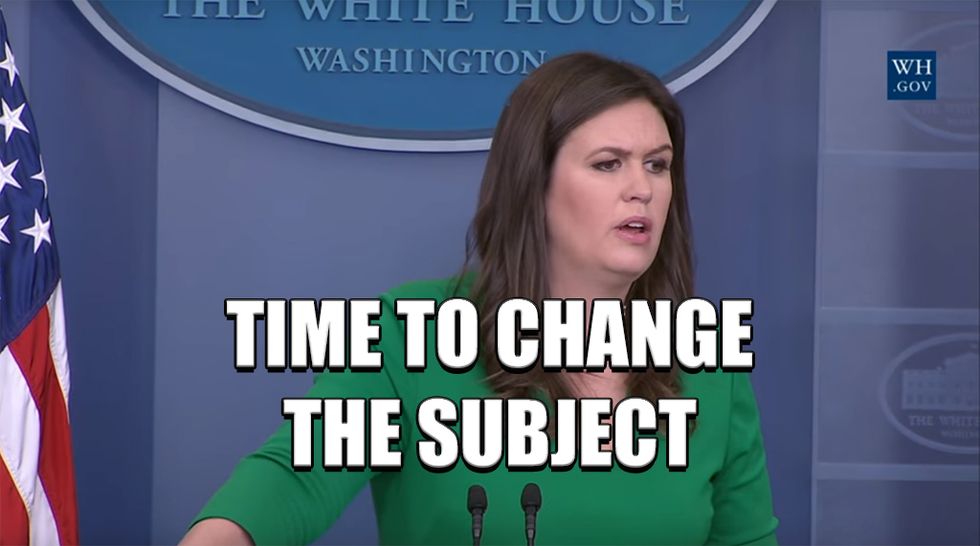 Morning Wonketariat! Here's some of the things we may be talking about today, and May the 4th be with you!

The staff of Trump's White House was shocked (SHOCKED) after Rudy Giuliani went all 9/11 on Trump's legal defense. While Trump loyalists hailed Giuliani's rambling admissions of guilt, some aides began texting reporters "a string of emoji characters in response, including a tiny container of popcorn." Now, Giuliani is attempting to backpedal and say that Trump didn't know about anything about the reimbursement until Giuliani told him. ¯\_(ツ)_/¯

In the fallout from Giuliani's comments, Stormy Daniels's lawyer, Michael Avenatti, went on TV to say that the $130,000 hush money payment was totally a campaign expenditure, and cited "extensive communication" between Michael Cohen and Keith Davidson just prior to the election.

This morning, a number of analysts seem to agree that Giuliani dun goof'd, and probably did Mueller's team a tiny favor.

House Chaplain Patrick Conroy has rescinded his resignation, and Paul Ryan has decided to keep him around after Conroy explained that Ryan's Chief of Staff commented to Conroy, "maybe it's time that we had a Chaplain that wasn't Catholic," after Conroy criticized the Trump tax cuts (for the super rich).

Mitch McConnell is still dead set on packing the courts with Trump's judicial nominees before the Blue Wave can stop him.

A bunch of House Republicans have endorsed Trump for the Nobel Peace Prize because Obama has one and Trump doesn't.

According to a new report by the Military Times, in the six months since Defense Secretary Jim Mattis order the military to do X-TREME vetting of new recruits, non-citizen military service members seeking citizenship has declined 65 percent.

WaPo has a story on how Sheldon Adelson and other lobbyists have been helping Scott Pruitt plan fancy trips to Not America.

Meanwhile, the New York Times has a story about how 15 years ago Pruitt bought a house with a lobbyist while he was in the state legislature. Coincidentally, they were both pushing for the same changes to workers compensation rules.

The chair of the House Freedom crazies Rep. Mark Meadows thinks Trump will re-up the Iranian nuclear deal in order to seem trustworthy with China and North Korea, but stresses that it's not a "foregone conclusion." Great...

Trump has told the Pentagon to consider downsizing the US troop presence in South Korea as Trump "demands" South Korea pay more than $800 million a year to station about 30,000 US troops. It really is all about money.

Unfuckably ugly and disgraced former Texas Republican Rep. Blake Farenthold won't pay $84,000 for the special election to fill the House seat he vacated after he found out he was going to be hit with ethics violations. Note: Farenthold is a millionaire.

Mother Jones has a great long read about how West Virginia Republican Senate Don Blankenship went to jail for the deaths of 29 miners, so it's only natural that a Blankenship campaign advisor threw them out of a campaign event and called them dirty hippies. (Not a joke!)

The PAC of super rich guy Tom Steyer is going negative on right-leaning and pro-Trump Democrats running in the 2018 primaries.

A court has ruled that Native American voters in North Dakota will be able to use tribal documents to meet voter ID laws, but the fight for the right to vote is far from over.

State lawmakers in Missouri have called a special session to consider impeaching Republican Gov. Eric Greitens on May 18. Gee, governor, kettles aren't very fun, are they?

Read this gut-wrenching ProPublica story about one West Virginia community's efforts to fight pollution from natural gas producers, and preserve the natural beauty of their mountain homes.

ANOTHER white supremacist has been convicted in the beating of DeAndre Harris at the "Unite the Right" rally in Charlottesville, Virginia, last year. The 39-year-old man faces fines, and five to 20 years for malicious wounding. LOCK HIM UP!

New Jersey Democratic Governor Phil Murphy says he's all for recreational weed, but that he's really more of a "Scotch or Irish whisky" guy; he's "never been a marijuana guy."

Wisconsin Republican Gov. Scott Walker is literally buying favor with voters by sending a $100 check to every family with a kid.

A 19-year-old man has been arrested in Illinois after someone tipped off the ATF to his fondness for guns. Agents found a cache of unlicensed of guns, an association with a neo-Nazi group that encourages "ethnostate rape gangs," and apparent threats to a judge and Jewish preschool.

State legislatures in Kansas and Oklahoma have approved laws that would allow faith-based adoption agencies to stop gay or non-Christian people from adopting children. Sorry, Annie, the sun won't come out.

Teachers in Arizona have ended their walk-out after the state agreed to a 20 percent pay raise by 2020, and an additional $138 million in school funding. It's not all that they wanted, but it's a good start.

Trade talks between the US and China are over and the the Chinese are pissed after being given a $200 billion list of demands for ending Trump's trade war. [Archive]

Senior officials in the UK are in discussions about extending the December 2020 transition period for Brexit after realizing just how hard it's going to be to separate themselves from the EU.

The US has cut off funding to the White Helmets, an all volunteer group of rescue workers who run into the remains of Syrian bombed out buildings in search of survivors. In March, Trump froze funding for recovery efforts in Syria, and Russian state-controlled media has been engaged in a concentrated disinformation campaign. [Donate] [Netflix Doc]

James O'Keefe is SO SAD that no news outlet will take him seriously due to his penchant for bastardizing and butchering stories, and now he wants revenge.

As Sinclair waits for FCC approval to buy Tribune Co., it's locked in a battle with Fox News for eyeballs, salivating at yet another crackpot cable news channel.

Dame Peggington swallowed another thimble of gin for her nerves, cracked her fingers and sighed. She had never heard such vulgarities as those espoused by Michelle Wolf. Why, in Dame Peggington's day, a woman knew her place! [Archive]