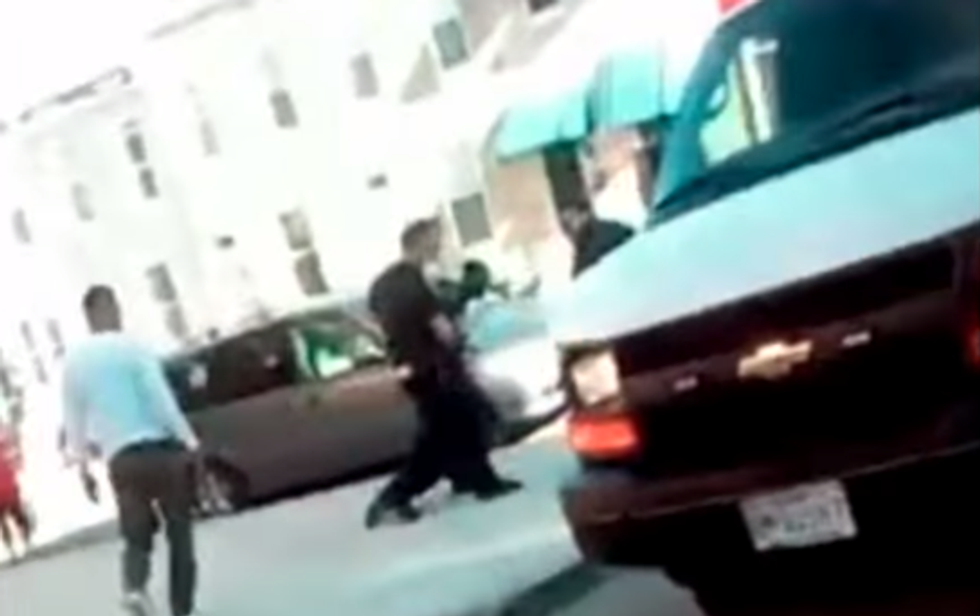 The city of Baltimore is enraged this week, after the arrest and subsequent suspicious death of a young African-American man name Freddie Gray, while he was in police custody. Details are hazy at this point as to what exactly happened, but this is what we know. Baltimore cops were patrolling on bikes in an area that was "known for drug dealing," and Gray ran away from them. By the time they caught up to Gray and arrested him, as can be seen in video footage, he was shouting that he was in pain, and a bystander yells that his leg is broken. A witness, Kevin Moore, stated that the police "folded Gray like 'origami'," and added that "[t]he officer had their knee in his neck. And he was just screaming — screaming for life. He couldn't breathe. He needed an asthma pump, which he let them know ... They ignored it."

Gray was then transported in a van and sustained some kind of medical emergency on the ride, but was not taken for medical care until the van had made two stops, one of which was to put shackles on his legs. Once in the hospital, he survived for a week before dying of a spinal cord injury on April 19. Gray's family adds that "his voice box was crushed and his neck snapped before he slipped into a coma and died."

What we don't know: A metric fuckton is what we don't know! For one thing, why wasn't Gray wearing a seat belt in the van? Oh, and also, um, why was Gray arrested? We know that Gray had a switchblade on him, but Baltimore mayor Stephanie Rawlings-Blake acknowledged that that, in and of itself, is not a crime. We know that he died of a spinal cord injury, but where did that injury happen? During the chase? During the van ride? Because an attorney for the police union is on record saying that the fatal injuries could have been sustained during a "rough ride," which old-timers used to laugh about giving to arrestees. No big deal, just making sure they got slammed from one side of the police van to the other. That seems like something the police should not do? We are sorry, we are not an expert in police work, but we can't imagine what benefit would come from driving in a way that's unsafe for drivers, passengers and other people on the road, but we're sure the police know better, especially since other people have also been paralyzed -- oh, and have also died -- during Baltimore's clever "rough rides."

So, the city of Baltimore is pissed, because the facts of this case are so, so sketchy, and also Baltimore police have a bit of history with the whole "police misconduct" thing, as the Baltimore Sun reveals in an extensive investigation:

Over the past four years, more than 100 people have won court judgments or settlements related to allegations of brutality and civil rights violations. Victims include a 15-year-old boy riding a dirt bike, a 26-year-old pregnant accountant who had witnessed a beating, a 50-year-old woman selling church raffle tickets, a 65-year-old church deacon rolling a cigarette and an 87-year-old grandmother aiding her wounded grandson.

Those cases detail a frightful human toll. Officers have battered dozens of residents who suffered broken bones — jaws, noses, arms, legs, ankles — head trauma, organ failure, and even death, coming during questionable arrests. Some residents were beaten while handcuffed; others were thrown to the pavement.

And in almost every case, prosecutors or judges dismissed the charges against the victims — if charges were filed at all.

So, they are used to this kind of thing, in Baltimore! We are sure the people of Baltimore take great comfort in that.

Meanwhile, did you know the police union called protesters a "lynch mob"?

Previously, union officials caused further outcry when a local union compared the protests to a lynch mob. "While we appreciate the right of our citizens to protest and applaud the fact that, to date, the protests have been peaceful, we are very concerned about the rhetoric of the protests," the  said in an April 22 statement. "In fact, the images seen on television look and sound much like a lynch mob in that they are calling for the immediate imprisonment of these officers without them ever receiving the due process that is the constitutional right of every citizen, including law enforcement officers."

Huh, we wonder how that played with black Americans who, over the course of their centuries of struggle in this country, have been subject to ACTUAL lynchings and lynch mobs? Apparently for this police union, the protesters are saying mean things, and that is just exactly the same as people being lynched. That has led certain people on Twitter to say things like this:

Good question! So, of course, now we wait, as the official investigations proceed. The mayor and police commissioner Anthony Batts have promised full investigations, all while acknowledging that a whole fucking lot of what happened that day was plain wrong. Of the six officers involved, CNN reports that five have given their statements, and one "has invoked his right to refuse to answer questions." So that sounds promising! What's a police brutality case without a little good old-fashioned obfuscation and ass-covering?

We'll just have to see how this plays out, but somehow we are guessing that, regardless of whether the investigation shows wrongdoing on the part of the police, they will probably go free and Freddie Gray will remain dead, because America.