Surprise! Donald Trump Was A Horrible Garbage Monster To Marla Maples! Who Would Have Thunk It? 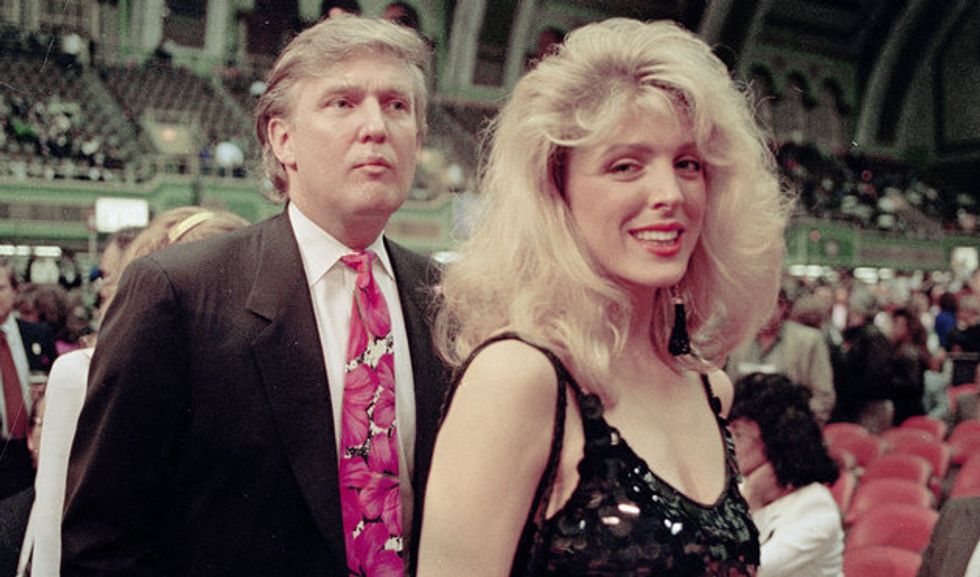 Oh hello! Welcome to what I assume is the 43rd story today about how Donald Trump is the actual worst human on the planet! "What is it now?" you ask, exhausted, knowing that whatever it is, it will probably not even sort of matter to the garbage people who are voting for him. Yaaaaaay! Nothing matters and we're all gonna die anyway! Probably sooner than expected if Donald Trump DOES become president and declares nuclear war on our very own country because some evil journalist somewhere said he had tiny hands. Or if all the other countries are like "Yeah, no, it's time for America to go now" and then THEY bomb us to death.

So what is this thing Trump was garbage about? WHELLL, Buzzfeed made a breakdown today of all the bad stuff he did to Marla Maples back when he was first starting to run for President way back in the '90s! You see, Marla (whom he cheated on Ivana with, but it doesn't count because it was in CHURCH. Adultery is totally wholesome if it happens in a church, so sayeth the lord) threatened to spill the beans on what kind of person he is, should he make it to the general election.

“If he is really serious about being president and runs in the general election next year, I will not be silent,” Maples told London Telegraph. “I will feel it is my duty as an American citizen to tell the people what he is really like.”

Trump, who is specifically not OK with anyone saying anything bad about him ever, tried to discredit her at first by insisting that she was only saying mean things about him because she was so very desperate to be back in the spotlight, because bitches love attention. Like she couldn't get on some Bravo show in two seconds flat if she wanted. Then, he tried to withhold the $1.5 million dollars in alimony he still owed her. His lawyer told the Daily News, “We notified the court that we are not paying and that we are putting the check in an escrow account.”

However! When they did go to court, the judge was all like "SORRY DONALD TRUMP, she did not actually reveal any of your marriage secrets in that interview, so it does not actually violate the pre-nup! Also, she is as free as anyone to say bad stuff about Donald Trump, because you can't actually pre-nup someone into only saying complimentary things about you."

SIDEBAR FOR DATING TIPS: If some dude asks you to sign a pre-nup in which he specifically states that you cannot, if you get divorced, talk about how horrible he was to you, then that is actually a pretty good sign that you should not marry him. At all. For any reason. Also you should then run very far away from that dude, and never speak to him again. RUN FUTURE MARLA MAPLES! RUN!

So, after they were all embarrassed about court and whatnot, Trump's lawyer, Jay Goldberg was all "WE WERE NOT SERIOUS, DOY" and splained that they were only trying to put the fear of god and no $1.5 million dollars into her so that she would shut up!

“It was never our intention to withhold the $1.5 million check,” Goldberg said to the New York Post. “Our purpose was to send a message that she was playing close to the fire. That should slow her down.”

Yikes! Donald Trump must have been pretty freaking awful to Marla Maples if he is this desperate to keep her quiet. I mean, if whatever he did to her was so terrible that he will go this far to keep her from talking about it, it has got to be pretty bad. Did Donald Trump strangle a kitten? Did he murder someone? OH MY GOD, DONALD TRUMP MURDERED VINCE FOSTER AND ASSASSINATED JFK! I will bet you that is what it is, although honestly I don't know enough to really say for sure that it happened, but it totally could have happened, and probably some people out there think it happened, so basically it happened and we can now talk about it as if it DID. That is how these things work, right?