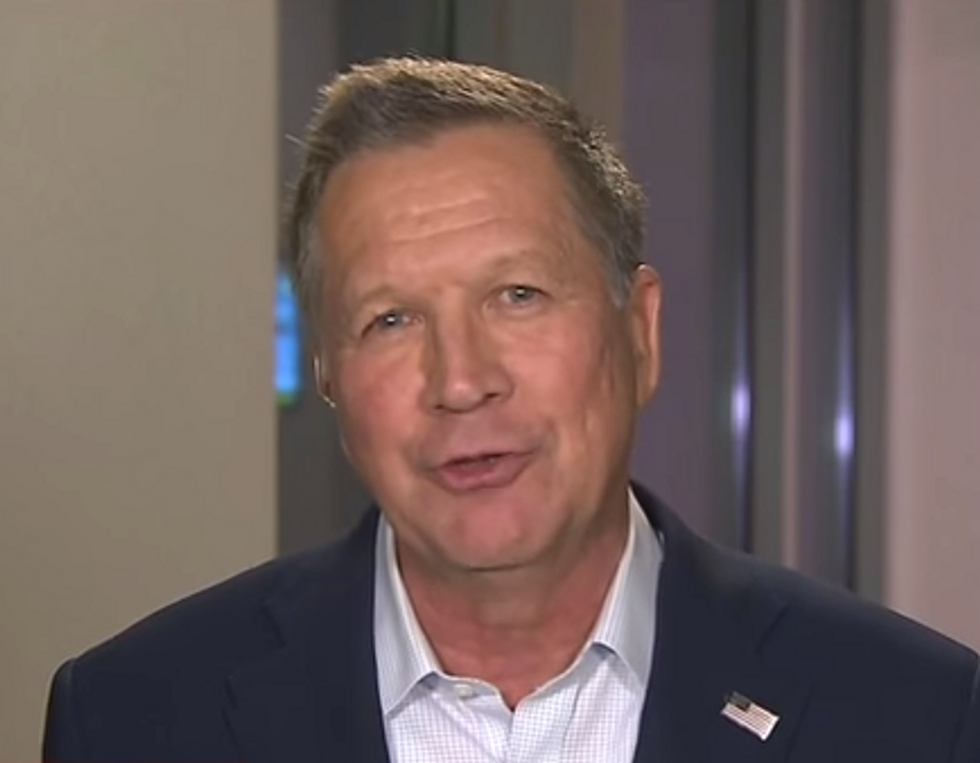 But he seems so nice

We keep telling you Ohio Gov. John "Look at me, I'm so moderate!" Kasich is a terrible rotten standard-issue rightwing extremist Republican butthead. But do you ever listen to us? Sigh. No, you get suckered in by his inside voice and his folksy sing-songy gee whiz cadence, and the fact that he has never said he wants to "carpet bomb" "the shit" out of anyone. Oooh, he's practically a liberal!

[contextly_sidebar id="fDR72CwitgWIZOW50zClE2UiPwYlEWMw"]Last month, he signed a bill to gut the fudge out of funding for women's health care because it's very pro-lifey to prevent access to HIV testing and cancer screening. That's on top of a bill he signed a couple years ago, which prevents rape crisis counselors from talking about abortion with rape victims, just in case they end up pregnant and don't especially want to have their rapists' gift-from-god babies. When he was asked, during a meeting with the editorial board of the Cleveland Plain Dealer, what even the fuck, governor, he didn't exactly respond with hugs and Midwestern charm.

His "welfare reform" to stop lazy moochers from stealing food stamps right out of the mouths of hard-working Ohioans has made his state one of the worst in the nation when it comes to food insecurity, which is a fancy way of saying people who do not have reliable access to enough gosh danged food to eat on the regular. Nothing says pro-lifey like letting people go hungry, right?

[contextly_sidebar id="pZJmrR9I1616Xt48YGkqhE1WgMSEZaM0"]Also, he believes God hates homosexuals and their untraditional dirty sinful "marriages" and thinks we should try to be nicer about how we treat bigots who think so too.

But you are welcome to keep ignoring us and our constant Drudge siren alerts and hysterical hand-waving and GRRRR MAD cusses that "moderate" John Kasich is anything but and would be as bad for America as any other Republican who doesn't bother pretending to be nice-nice about it. Check it:

Mr. Kasich’s aura of civility, kindness and positivity is so pronounced — and so at odds with the fulminations of the real estate mogul — that an anxious voter in Worcester, Mass., wondered whether he could summon the combativeness required to be an effective president.

“I worry that you’re just so nice,” the woman said.

Mr. Kasich’s colleagues in Ohio and Washington do not share that worry.

The New York Times girl-talked to people who have actually worked with Mr. Nice 'n' Easy, and you'll be shocked -- shocked! -- to know that in their many years of experience with him, he is kind of a dick. And no, we're not just talking about members of the Democratic Party. Unless we missed the memo that notorious asshole Newt Gingrich switched his party affiliation:

The John R. Kasich of 2016 is a much mellower politician than the hard-charging congressman of the 1990s, who could be so difficult that House Speaker Newt Gingrich, never known for his diplomacy, offered Mr. Kasich firm advice about his tendency to bulldoze colleagues.

“I talked to him a lot about unlocking people rather than running them over,” Mr. Gingrich recalled, adding of his counsel, “I think some of that actually stuck.”

Naturally, Gingrich pats his own back for having a positive effect on Kasich and making him be more nicer because Gingrich is an insufferable narcissistic shit stain. But when Gingrich -- the petulant toddler who shut down the government because mean President Clinton didn't give him choice enough seating on a plane one time -- is calling someone else a bully who needs to tone it down, well, you can probably finish that sentence yourself, right?

In Ohio, it's not just Democrats who say the whole John "Aw Gosh Willikers" Kasich act is a bunch of bullpoop; his fellow Republicans don't really dig his mood swings and general jerkosity either.

“Anyone who’s been around Governor Kasich knows that it depends on what kind of mood you catch him in,” [Republican state Sen. Jay] Hottinger said.

Several of the governor’s longtime allies and adversaries said they were watching the newly genial Mr. Kasich, as a presidential candidate, with bewilderment.

[contextly_sidebar id="2xfX7BvfdsM0DjBa1HuM9kA6aFAwBPoA"]Yup, that's definitely the guy whose finger we want on the red button, right? At least he'd be nice about it though! That's his new #brand, after all. Which is why he's calling for a polite and smiley-faced velvet revolution at the Republican National Convention this summer, where he and his merry band of advisers will "unlock" the delegates into crowning dead-last-place loser of the GOP primary the party's presidential nominee, with no swears or dick jokes or face-punching, please, because he's so darned "so nice" and moderate like that.