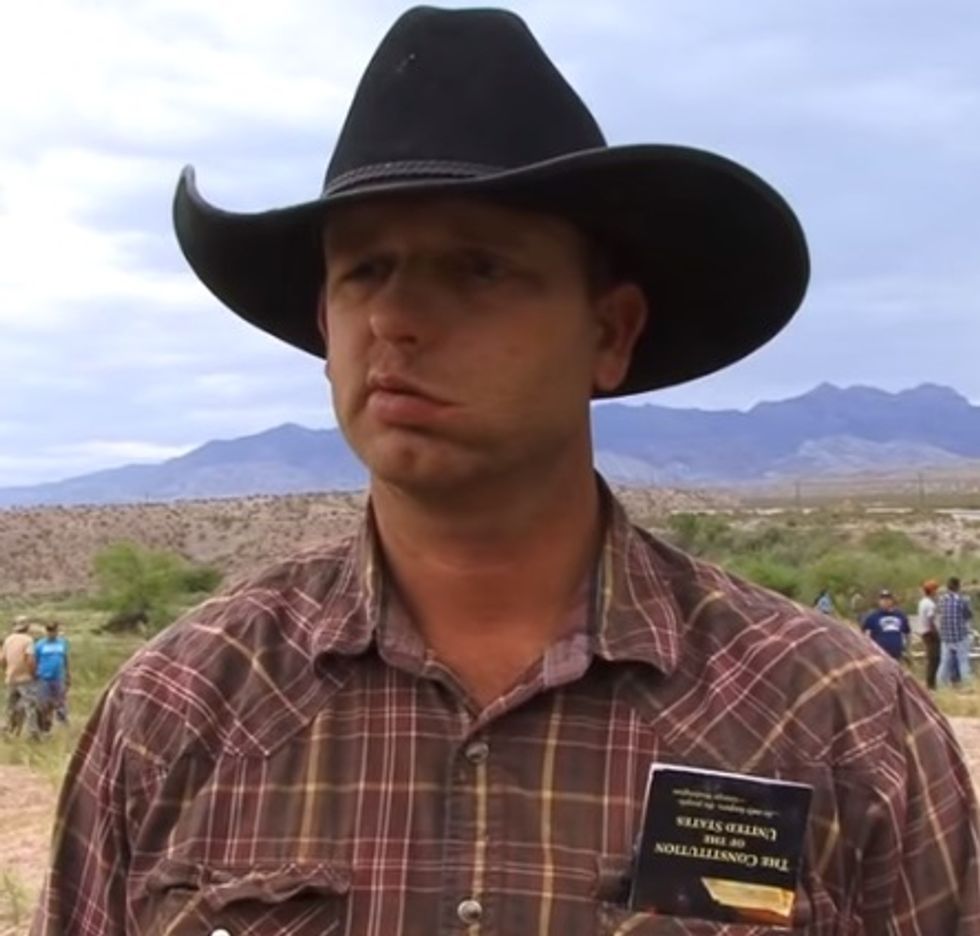 In a series of weirdass legal filings full of Sovereign Citizen word magicks, Ryan Bundy, one of the multiple freedom-fightin' sons of Cliven Bundy who occupied the Malheur Wildlife Refuge in Oregon earlier this year, is making believe that he is not actually subject to federal or state law, because he is a free man and you can't put your filthy laws on a free man, you monsters. It's not quite the same as pleading guilty, but it doesn't make him magically immune from prosecution any more than painting his ass green and wearing purple undies would make him the Incredible Hulk.

Oregon Public Broadcasting, which we've subscribed to because their coverage of the Bunditarian Freedom Comporee was so good, sorted through some of the SovCit arglebargle for readers who insist on living in mere reality:

Bundy, who is representing himself in the conspiracy case against the refuge occupiers, declares himself an “idiot of the ‘Legal Society’” and not subject to federal law, according to the documents.

“I, ryan c, man, am an idiot of the ‘Legal Society’; and; am an idiot (layman, outsider) of the ‘Bar Association’; and; i am incompetent; and; am not required by any law to be competent,” Bundy wrote in a motion filed to U.S. District Court Judge Anna Brown.

Oh, and what a beautiful document it is, complete with the magical phrasing and capitalization/punctuation games that Sovereign Citizens' pseudolegal "theories" insist separate the physical human being from the "corporate" or "legal entity" known by the name "Ryan Bundy." One is a man, a lump of flesh, the other a mere legal fiction created by the illegal machinations of the United States Government (Inc.), which isn't real, either. We've cropped out his signature on all but the first image, which for all we know makes us liable for prosecution by a citizens' grand jury made up of gnomes.

Possibly the best bit in the whole mess is the cover sheet statement by Bundy's court-appointed standby attorney, Lisa J. Ludwig, who knows she has a hopelessly deluded SovCit on her hands. She says she conferred with the prosecuting U.S. attorney in the case, and "The government takes no position on this filing." We'll hope she went home and had a nice glass of wine after that, and reminded herself that hers is a noble calling.

Bundy also filed another, lengthier notice declaring himself to be a "man" and a member of the "bundy society" (lowercase, in SovCit magic, you know, is very important) and that he is owned solely by God, and responsible only to god, so your laws don't count, so there. It is undetermined whether he also turned around three times and spat. Here's one page, just so you can have a taste of the weird:

There's some excellent pseudolegal gibberish in there as well, about how the states of nevada and oregon (LOWER CASE IZ NOT TYPO IT IZ MAGICK!) are not part of the "UNITED STATES OF AMERICA" (CAPS MATTER TOO) and laws passed by "Congress" do not apply to citizens of Heaven, not to mention Oregon, and so on; furthermore, the courts and the law enforcement officers responsible for his arrest have no authority, so he is entitled to immediate payment of $800 million in compensation for all the trouble those illegitimate bad guys have subjected him to. Also, the judge is in contempt of court, since obviously she knows she has no authority over Bundy, and she and the entire law enforcement apparatus responsible for his arrest and jailing should all "be put in a concrete cell for one hundred years or restore i to liberty and cease and desist immediately[.]" Guess he told THEM! He gives the court until July 30 to comply, but doesn't say what the penalty will be if they don't. God's wrath, we bet.

OPB offers a bit of commentary on the weirdness:

Self-declared “sovereign citizens” have a long, if unsuccessful, history of declaring themselves not subject to federal laws.

Bundy also told the court in the filings that any past signatures by him are now invalid and that U.S. marshals and other law enforcement are illegally holding him in jail. He wrote that he should be paid $1 million to fill the “role” of defendant in the case.

Bundy muses in the filing that he is “willing to consider” playing the role of judge or bailiff in the case if the court pays him a similar sum.

Bundy has previously attempted a halfassed effort at escape from jail; in April, jail staff found a rope he'd made by tearing up bed sheets and braiding the strips into a 12-15 foot rope. He told bailiffs he was simply "a rancher, trying to practice braiding rope," as one does.

Out in the real world, Ryan Bundy and ryan c, man (and idiot), are both scheduled for a status hearing in court next Wednesday.